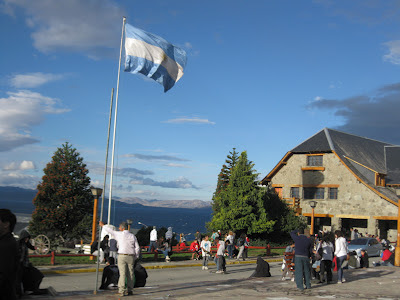 It was a long ride, but eventually, we arrived: Bariloche, in Argentine Patagonia.  Bariloche is the kind of town that really symbolizes an entire region, conjuring up many images of Patagonia upon simply hearing its name. It is a destination unto itself, a community many travelers are moved to visit almost as a place to check off a list of important stops on a grand South American tour.

When we began our trip, Bariloche wasn’t on our own personal list of places to see, but once we decided to include Argentina in the loop, we couldn’t resist putting it squarely on our path.

To get there, we crossed over the Cordillera de los Andes, the continental divide of South America, and the border between Chile and Argentina.  With it came too the protracted wait at checkpoints on either side of the border. 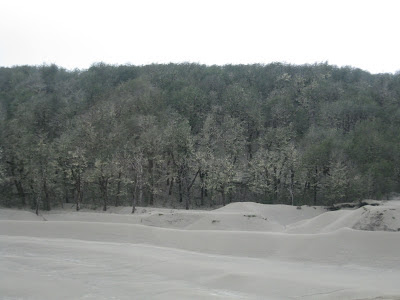 We also had the chance to see firsthand the otherworldly effects that the eruption of the volcano Puyehue has had on the surrounding landscape.   Ash has piled up relentlessly on the ground, in the branches of trees, and on the roofs of buildings, like grey snow that will never melt. 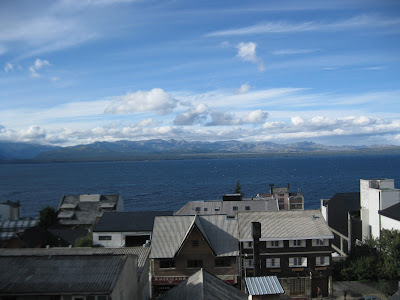 And after nearly a full day of being on a bus, we were there.  As the blue waters of Nahuel Huapi lake came into sight for the first time, I admit I was happy to be finishing with such a long ride.  The scenery had been incredible along the way, changing constantly as we went.

But, once we were off the bus and making our way into town, it was liberating to have such a long trip behind us, no matter how picturesque it had been.  It wasn’t long before we were looking over the lake from this vantage point, the apartment we rented for our stay.

After so many times calling ahead for our accommodations for the next destination, we decided to play it by ear in Bariloche, what with the dozens of places to stay that were to be found in every travel guide and website we looked at.

In the end, for the same price we’d pay at a hotel, we had our own place with a private kitchen and a view.  Not too shabby!

Once we were set up with a place, we headed out for the evening for some pizza, followed by some looking around.  After dark, the summer heat gave way to the cold mountain air.  We hadn’t packed much in the way of warm clothes, but it turns out that Bariloche is something of a shopping capital of Patagonia.  The main emphasis was handcrafted chocolate, but there were plenty of clothing stores to be found as well.  After fortifying ourselves with a little of both, we were equipped for the night and the festivities that came with it. 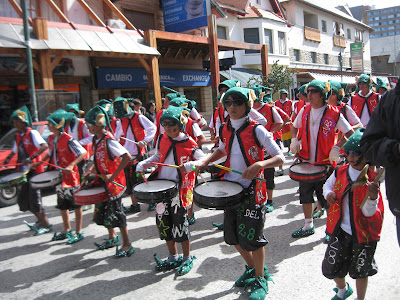 By chance, we found ourselves in Bariloche for the weekend of Carnaval, the feast of Catholic binging prior to the pious period of Lent to be ushered in with the coming Ash Wednesday.  A tradition with a history nearly as long as Lent itself, nearly all countries with a Catholic tradition have their own version.  Ecuador certainly does, as I’ve experienced befpre.

I don’t know how representative Bariloche is of Argentina as a whole, but the community here was doing its best to drum up *ahem* some Carnaval parading in the festive tradition I saw in Ambato.  While these kids were dressed a bit more warmly that what you might find in more tropical places like Ecuador, or Rio de Janeiro, they did a fine job ringing in the Lenten season.

Some more Argentine food, a bit more consumerism, and sadly, our time in Bariloche came to an end as quickly as it started.  Or not so sadly, really, as the road ahead led to old friends in another town in Argentine Patagonia.

One more stop on our tour of the Southern Cone!

Brian Horstman is a teacher of English as well as a traveler, writer, photographer and cyclist. His interest in traveling around Latin America began while he was living in New Mexico, where he began to experience the Latino culture that lives on there. From there he spent time in Oaxaca, Mexico and has since been living in Cuenca, Ecuador and will be living in Chile starting in 2011. Cal's Travels chronicles some of his more memorable experiences from Mexico and Ecuador, as well as some side trips to other parts.
Read More Share
Berlin’s Bikes Come in Multiple Colors and Personalities
Peruvian Chicha, Beer of the Gods