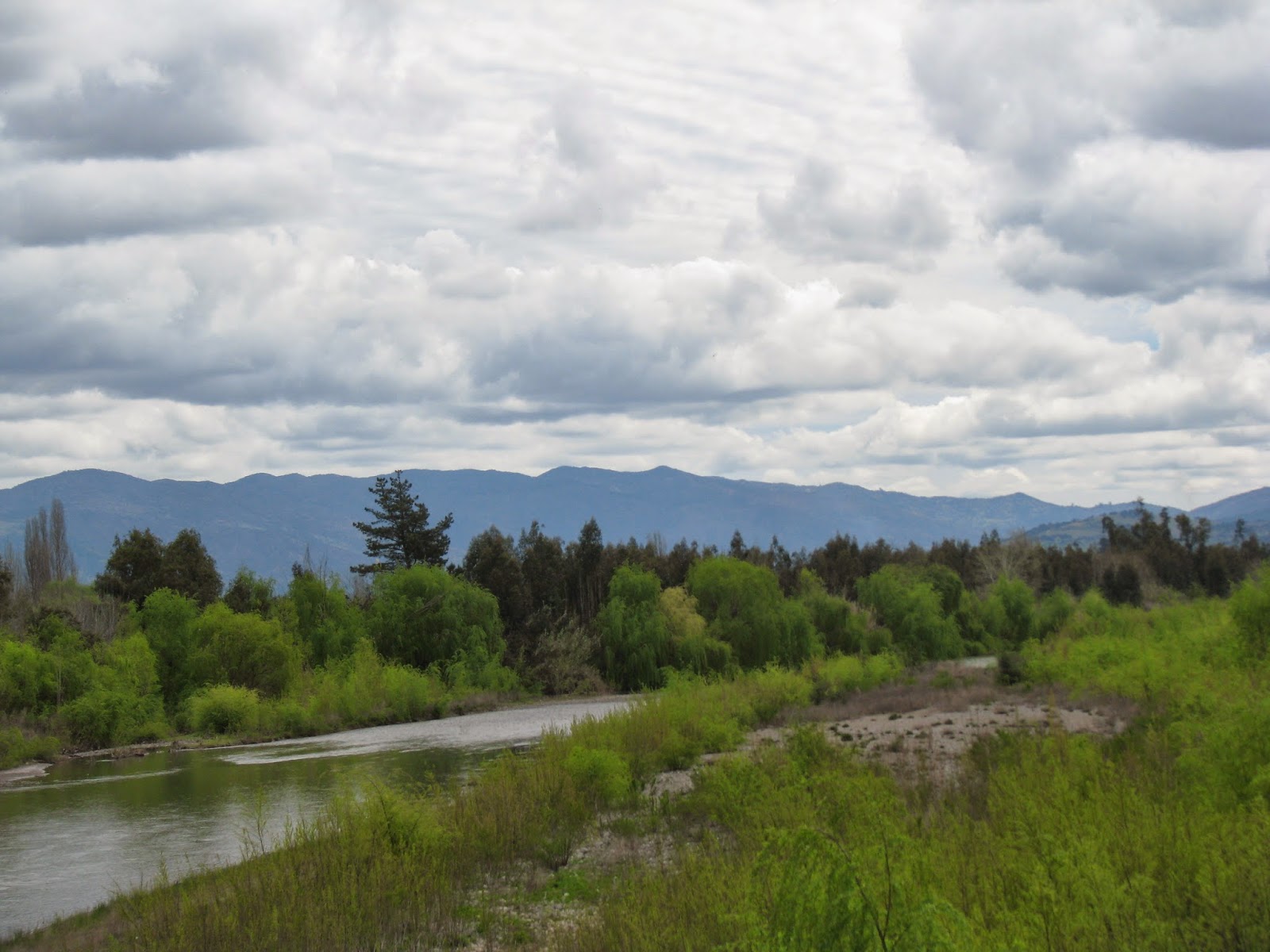 During the September 18 Fiestas Patrias last year, we decided to take a train to the Valle de Colchagua. Several of Chile’s central valleys have been given over to vineyards, and the Colchagua Valley in particular has gained international renown due to some award-winning wines that have begun to emerge in recent years from this region.

September in Colchagua is the last month of winter, and during the first day of our stay we had overcast skies and cool weather. Also, being the end of the rainy season, we were able to enjoy the valley at one of its greenest times of the year. Much like southern and central California, for many months of the year, central Chile receives very little rain, and as a result the valleys, hills and mountains are rarely as green as they are at the end of winter. 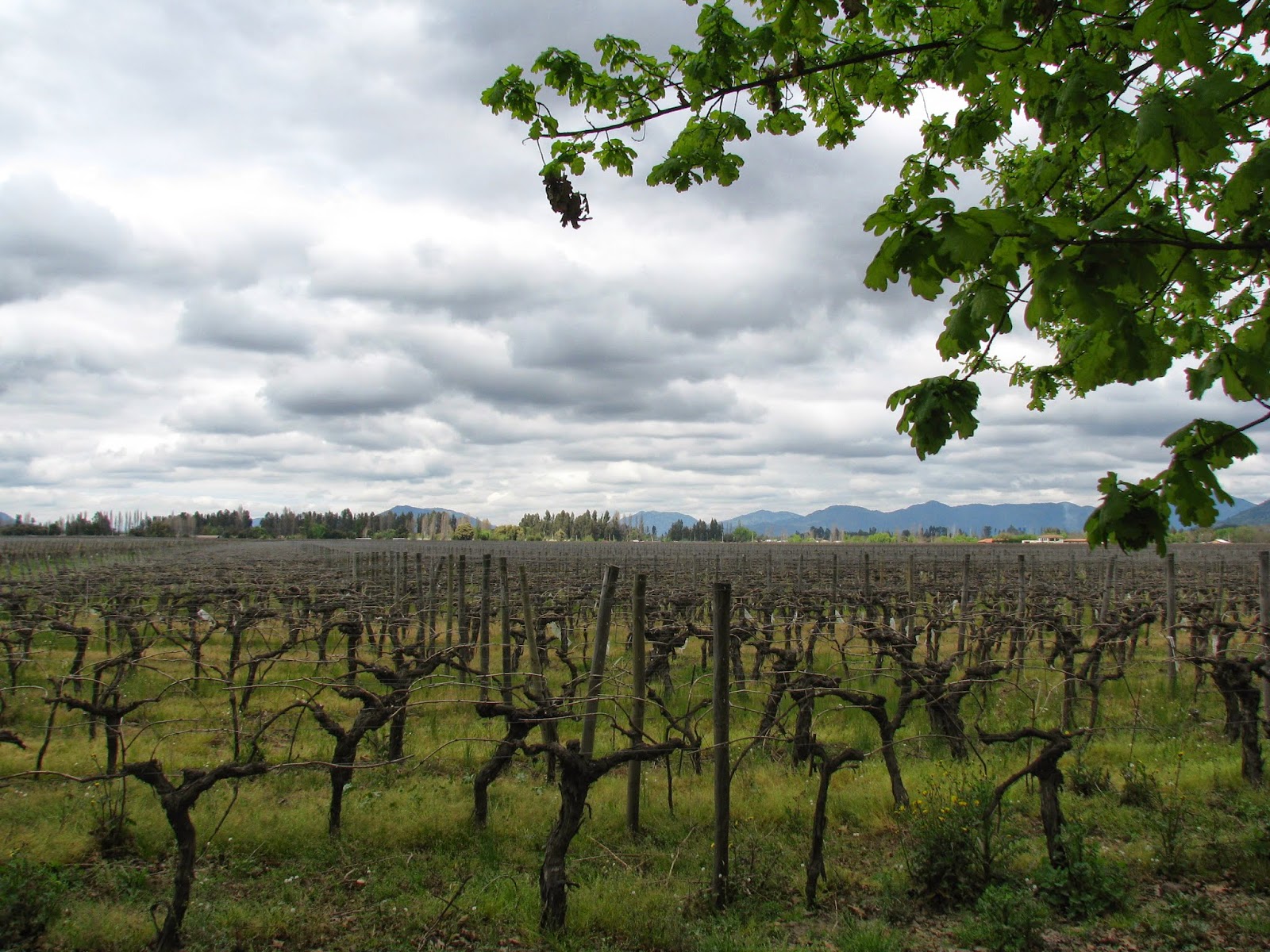 Conversely, being the very beginning of the agricultural season, the vineyards themselves were still barren of leaves. As the progressively drier spring and summer wear on in this part of Chile, the landscape changes from green to golden, and ultimately, brown. At the same time, the irrigated basins of Chile’s valleys stay a radiant green, ultimately producing much of the fruit that the rest of the world enjoys throughout the northern winter. 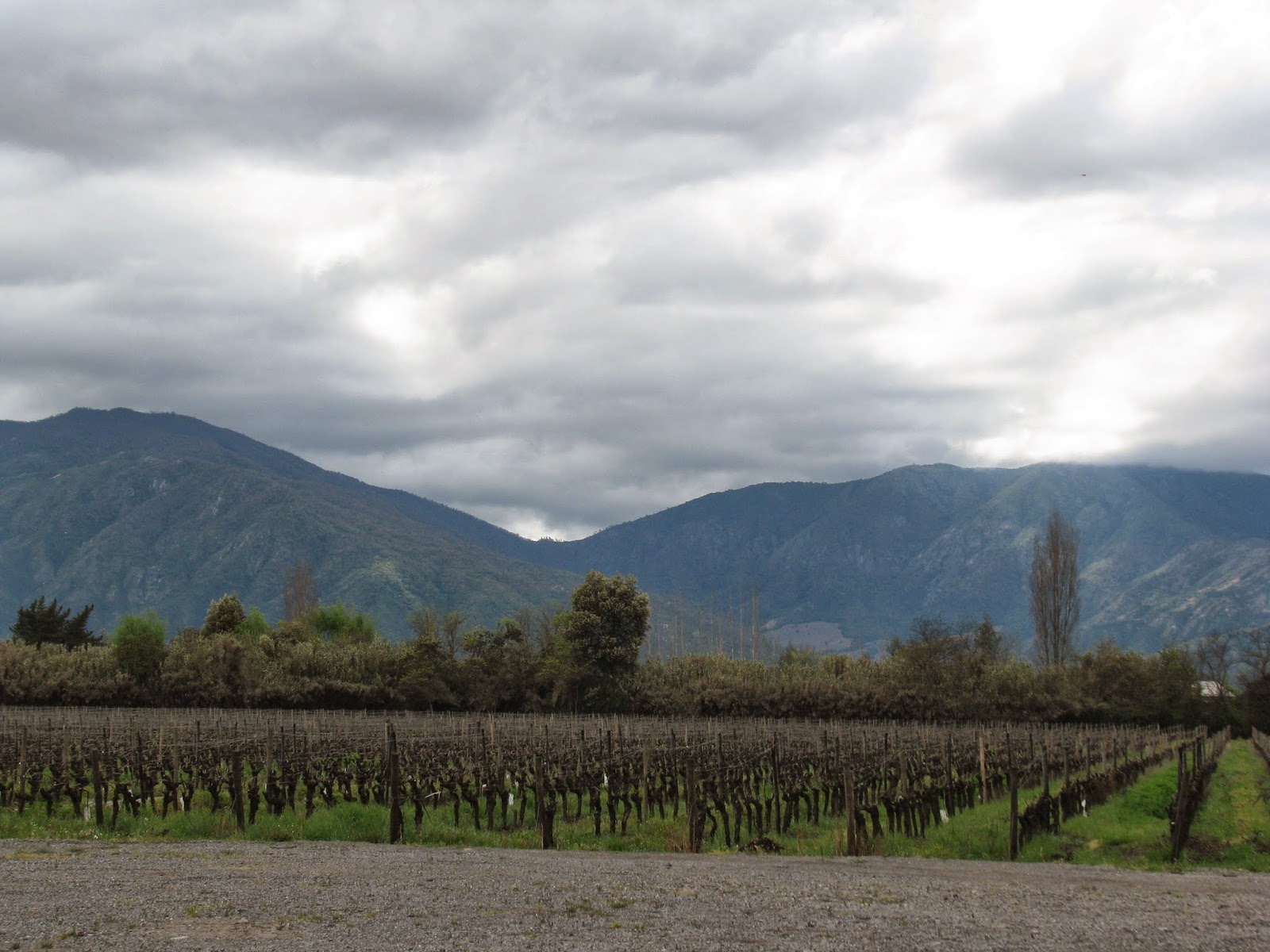 Central Chile, bounded by the Cordillera de los Andes to the East, the Atacama Desert to the North, Patagonia to the South, and the Pacific Ocean to the West, enjoys what may be a unique natural isolation compared to any other agricultural zone in the world. Due to this, many of the pests and diseases that have ravaged various types of grapes and other produce have never been able to reach this part of the world.

Now that the country is ever more open to global trade, Chilean customs officials work very hard to prevent foreign agricultural products from entering the country, even those brought in by tourists arriving across borders by air or land. As a result, there is for example a variety of grape known as Carménère, which was almost completely devastated decades ago in its native France by a type of fly and is now almost exclusively produced in Chile. 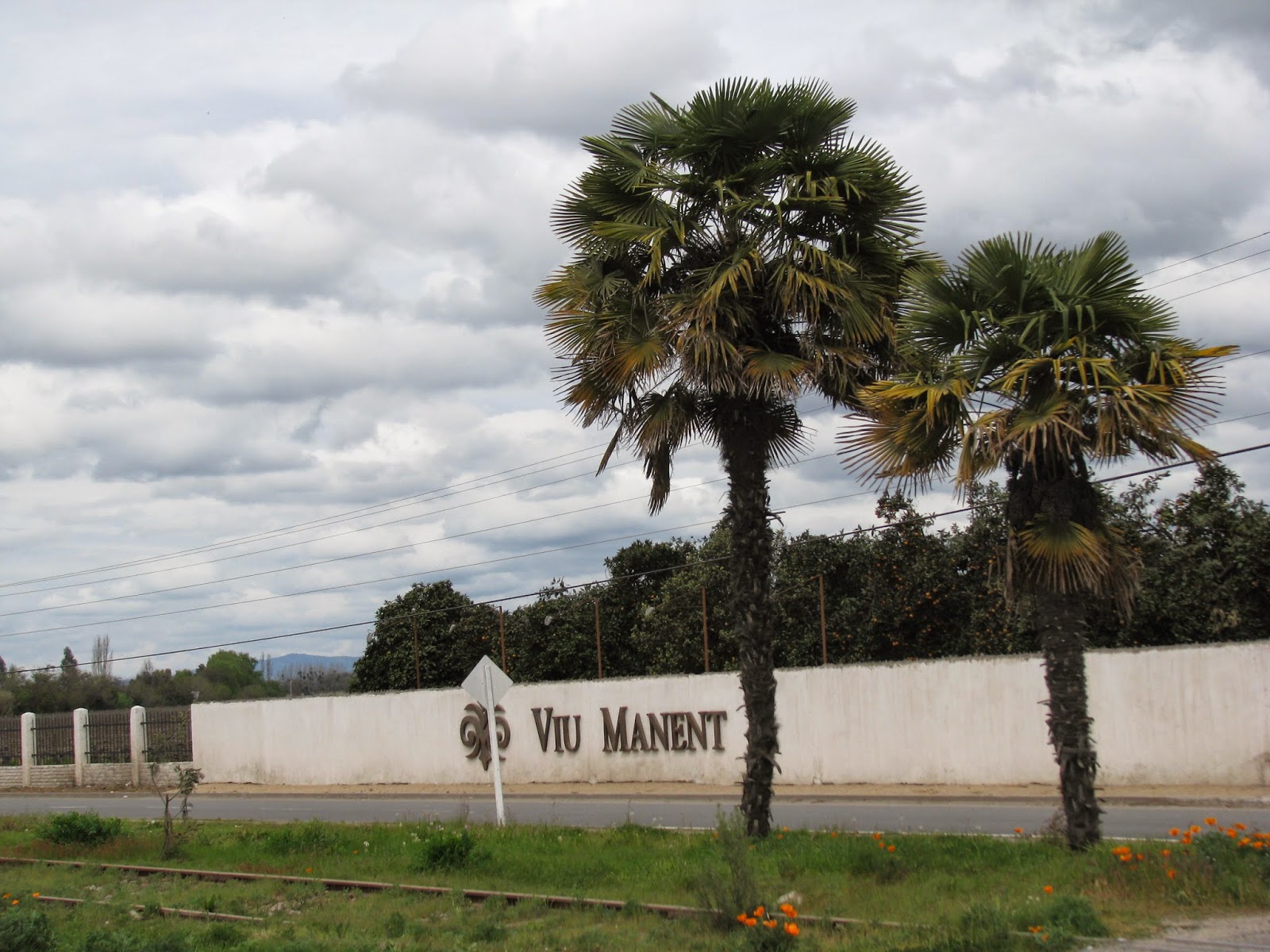 The first vineyard we visited was, as you can see, Viu Manent. We’ve visited vineyards before, and to a certain extent, once you’ve toured a vineyard and seen the various stages in the wine making process, the information you receive on subsequent tours will start to become a bit repetitive.

That said, each visit to different vineyards during our time here in Chile has continued to hold our interest and reveal more to us about the subtleties of different methods and scales of production. Every vineyard is unique not only in its wine-making practices, but also in the treatment of the tourists who come to visit. 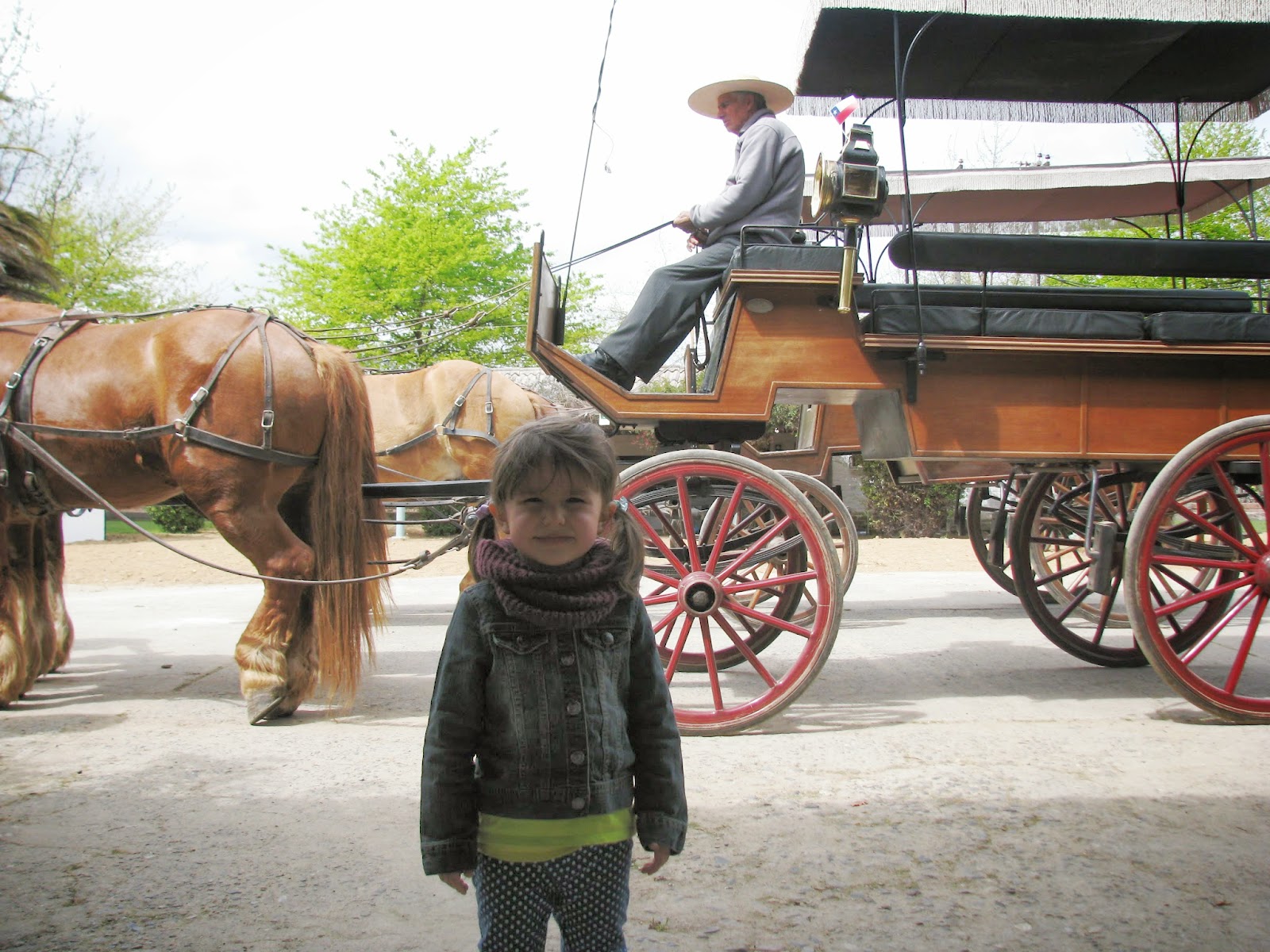 Vineyards are large places, necessarily occupying many hectares in order to grow enough grapes for commercial production. So how to provide a close-up look for tourists of both your facilities and your fields, especially if they are located far apart on your estate?

One solution several vineyards have adopted is to plant a selection of vines bearing all of your different varieties of grapes in one place for tourists to see and sample conveniently. Others, like Viu Manent, have found another way. If you have to move people across a long distance, why not move them in style? 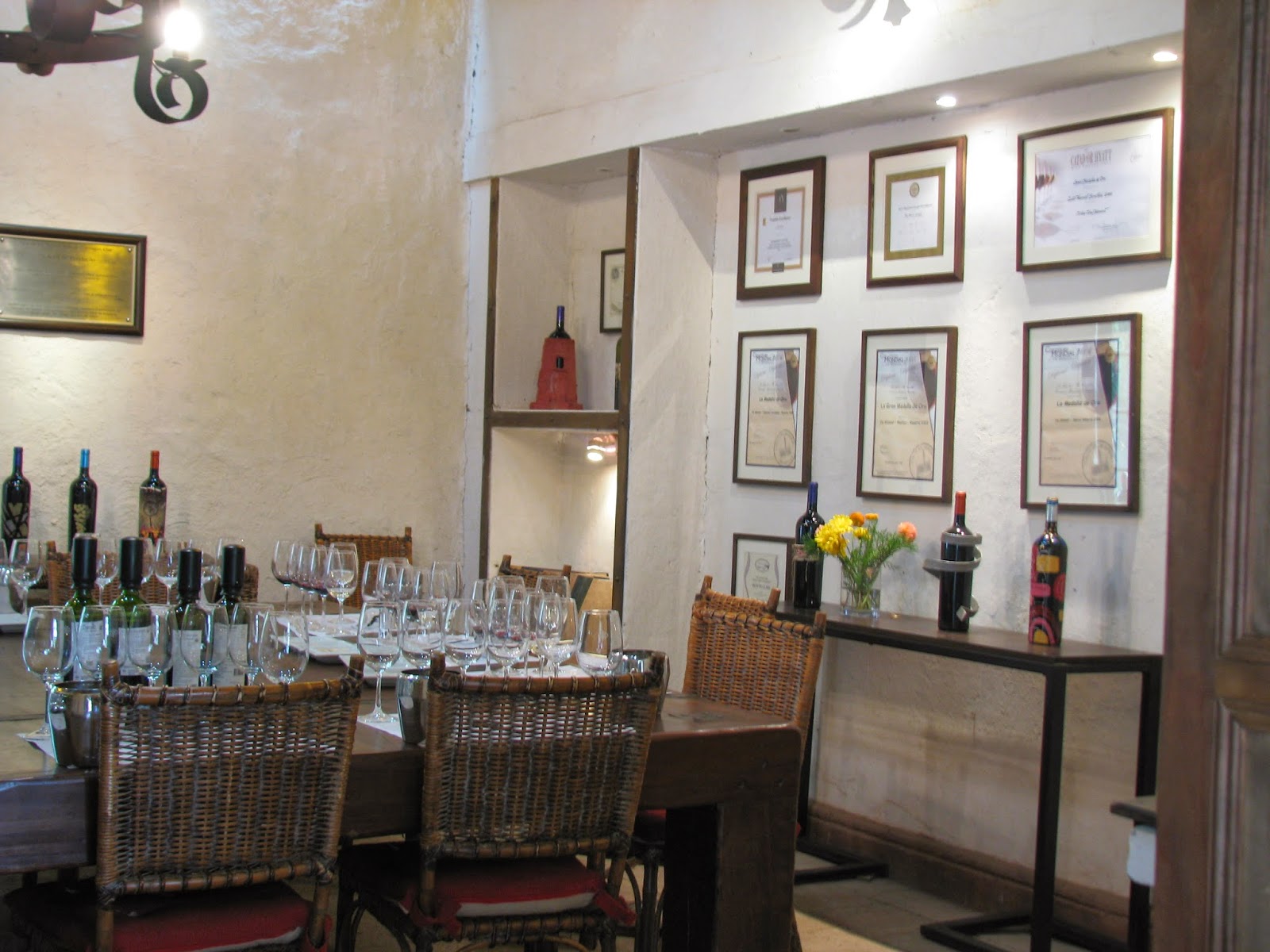 Rather than show you the fermentation tanks and barrel room of Viu Manent, I’ll refer you to the experience we had in the Cachapoal Valley. After all, while there are difference in production methods, barrels and tanks end up looking much the same. What is always distinctive in each vineyard, however, is the tasting of the finished product.

From the presentation of the wine to the wine itself, it’s always a joy to sample a bit of the wine that you’ve been learning about during the tour, and to afterwards, to select a few choice bottles to take home with you as well. 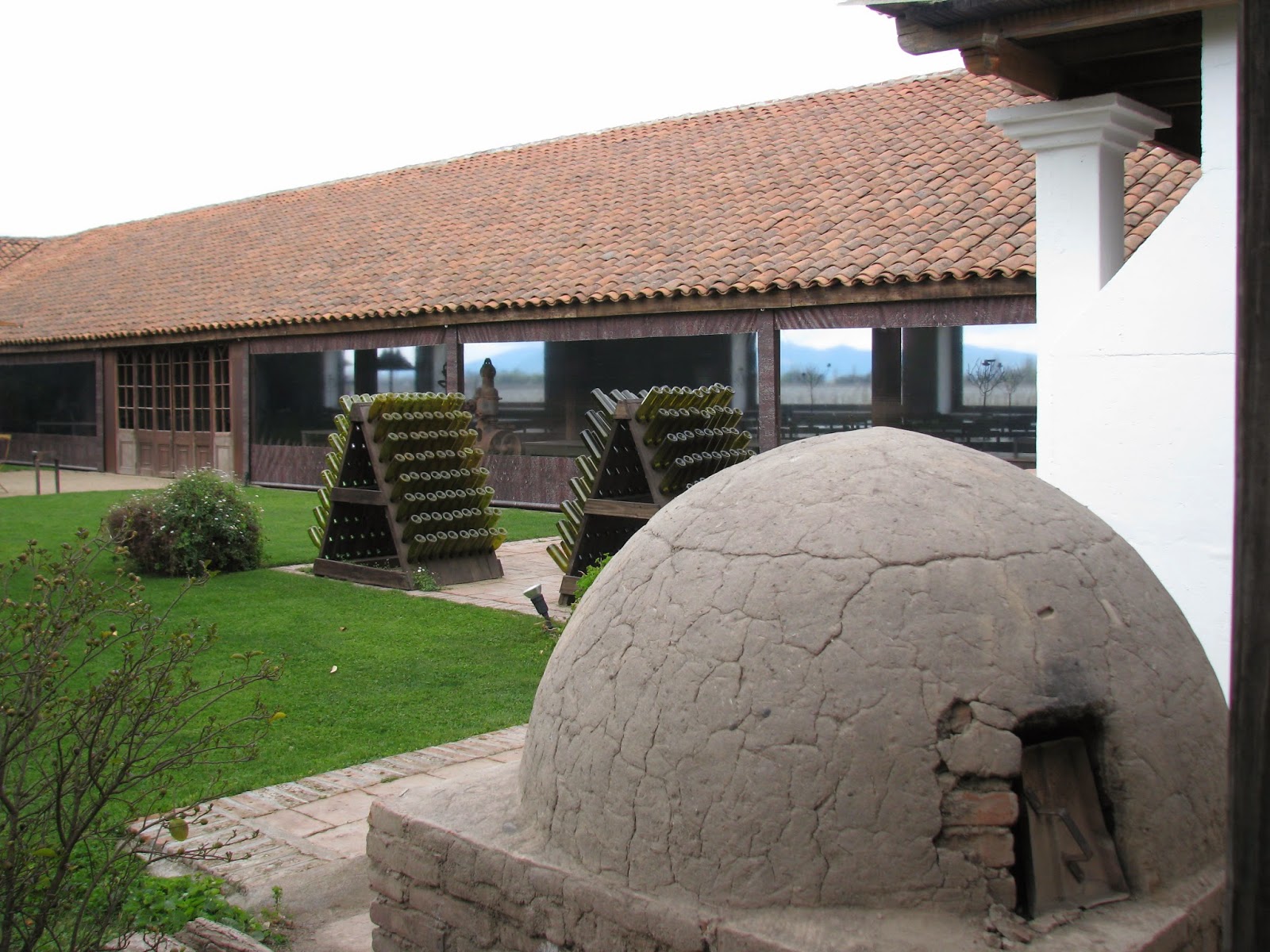 Another treat inherent in the visit to a vineyard is the fact that you are exploring what is, in essence, an expansive rural estate, often graced by historic buildings and the beautiful landscapes that are synonymous with the Mediterranean climate necessary for good wine production.

Modern vineyards, while embracing the technology associated with commercial wineries, also invariably have one foot firmly planted in the past. From vines cultivated over the course of decades to wines aged in the controlled climate of a good cellar, the wine making process is steeped in time. 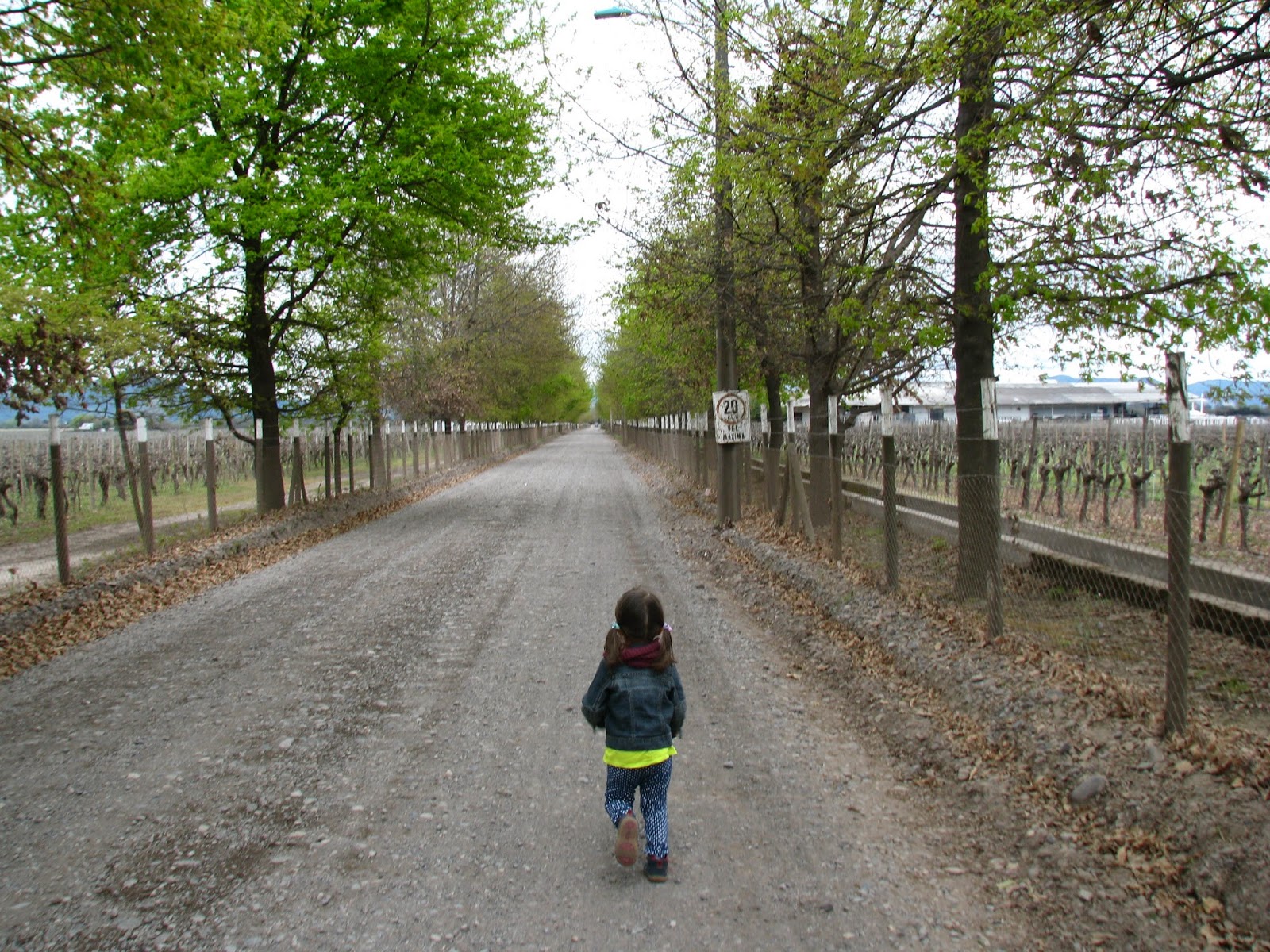 Brian Horstman is a teacher of English as well as a traveler, writer, photographer and cyclist. His interest in traveling around Latin America began while he was living in New Mexico, where he began to experience the Latino culture that lives on there. From there he spent time in Oaxaca, Mexico and has since been living in Cuenca, Ecuador and will be living in Chile starting in 2011. Cal's Travels chronicles some of his more memorable experiences from Mexico and Ecuador, as well as some side trips to other parts.
Read More Share
Freeing Yourself From Internet Censorship When You Travel
Dominica: From Nature To Culture & Back Again!