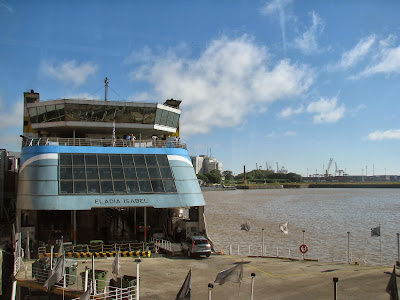 There was more to our time in Buenos Aires than I’ve reported recently. The time we spent roaming Palermo and other residential neighborhoods. The various parks and green spaces, the pizza, grilled meats, and traditional Argentine dishes. The trip by train to the nearby river town of Tigre. 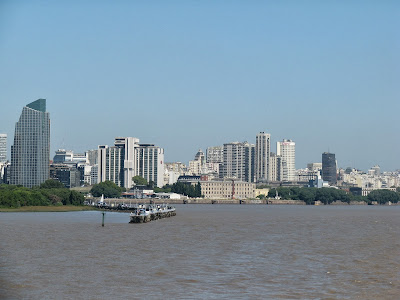 But we’d better keep the story moving forward. After a week in Buenos Aires, we boarded a large ferry boat and headed across the estuary separating Argentina from Uruguay. It’s famously called the Río de la Plata, or as it is sometimes translated into English, the River Plate. But let’s be realistic, it’s really more estuary than river. As we headed out onto the water, we were granted a nice view of the city we were leaving behind. 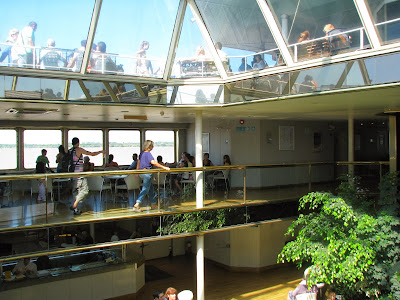 There are two kinds of ferries you can take across the border. There’s a smaller, faster boat that takes an hour and has seats much more like an airplane’s to relax in during your short voyage. The other option is a slower vessel designed more like a cruise ship, with an open air deck on the top, a bar and café, and even live music on the lower deck. That’s the one we chose to take. We weren’t in any hurry, and it was still morning, so why not enjoy a laid back trip across the water? 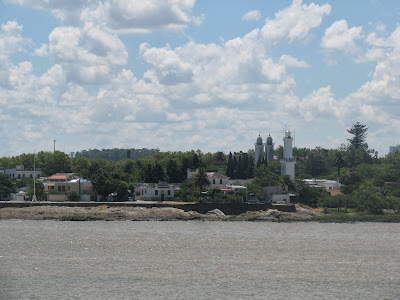 Crossing the Río de la Plata by boat is one of those essential moments for any traveler trying to have a full South American experience. While the River Plate is not quite a river, it’s also not quite the sea. Calm water, brown from the sediment pouring off the continent, all silent proof of the sheltered waterway you’re sailing across. And just as you lose sight of land and the metropolis of Buenos Aires behind you, you see another coast coming into view ahead. As your ship presses onward, the shroud of summer humidity gives way and you catch your first glimpse of the historic city of Colonia, your port of entry to Uruguay. 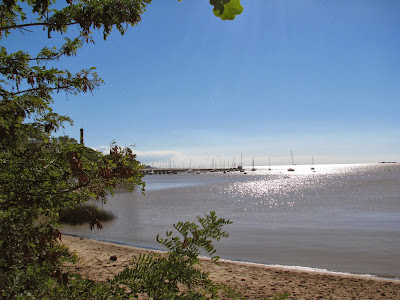 There’s nothing like being in a seaport town in the summer. Looking out onto the expanse of water from the vantage point of a quiet beach, blue skies, hot sun, cool breeze, boats sailing in and out of the harbor. Tropical music provides the right ambiance to complement the sound of the gentle waves lapping up onto the shore. What a fantastic way to spend your days. At times like this, you start to wonder why you live so far from the seaside. 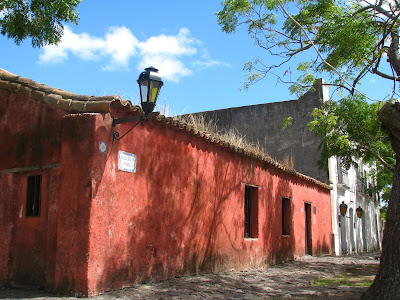 But Colonia is famous not for its beaches or its port. Its port does receive quite a few cruise ships and ferries, like the one we arrived on, and a beach like the one in the photo above. But Montevideo, Uruguay’s capital city, is the main port city for the country. And if you’re in Uruguay for its beaches, cities like Punta del Este are much trendier destinations. Instead, the main attraction in Colonia is its historic center. 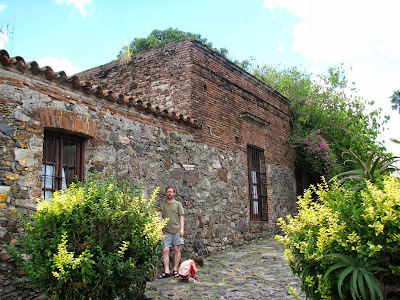 Founded in 1680 by the Portuguese, the settlement changed hands between Portugal and Spain several times throughout its history. This constant push and pull has left an indelible architectural mark on the city, as the Portuguese and Spanish both imparted their own legacy on the varied street plan and buildings to be found there today.

Uruguay itself, a tiny country sandwiched between the two huge countries of Brazil and Argentina, was forged as an independent nation mainly in order to create a buffer zone between the ambitions of those two larger countries, which had fought to a stalemate in a war in the region. And while this small territory has a border with Brazil as long or longer than the one it shares with Argentina (depending on how you want to define the border along the Plata River), culturally speaking, Uruguay is much closer to Argentina. 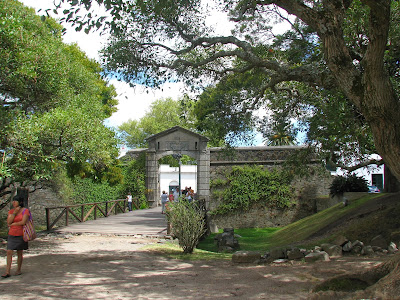 Uruguayans speak Spanish in an accent (for me) indistinguishable from the famously characteristic dialect of Argentina. The Uruguayan people also share Argentinian’s appreciation for the drink yerba mate.  It could even be argued that Uruguayans surpass Argentines in their fanaticism for the beverage. While we saw plenty of people drinking mate in the streets and parks of Buenos Aires and other cities we’ve explored in Argentina, we typically saw them drinking it in the afternoon, presumably as an excuse to spend some time relaxing outdoors, after lunch. 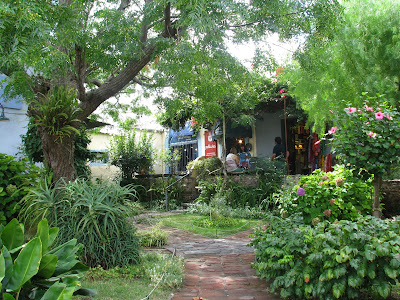 Unfortunately we didn’t get any demonstrative photos of Uruguayans and their prodigious consumption of mate. But we were impressed to see people there drinking it in the morning with breakfast, as well as at lunch, and after dinner. And it was not uncommon to find people walking around with a leather pouch across their shoulders, custom designed to hold mate, gourd, and hot water thermos, for easy consumption whenever you want. I can’t blame people for enjoying it so much, it’s a great way to spend a leisurely afternoon in the park. If you’re not sure what mate is, you can easily investigate online. But, I digress… 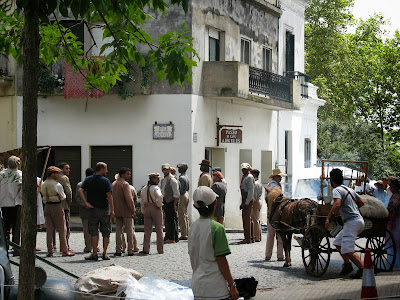 During our stroll through Colonia’s historic district, we happened upon this group of men in old-timey hats and suspenders. For obvious reasons, film crews regularly descend on the town, to take advantage of its ready-made colonial backdrop. By the time we came upon the group, the filming for the scene was coming to its conclusion, and for the rest of the afternoon the actors went loitering about town in their own various directions, still in costume. They lent an extra air of history to our afternoon, the sight of people casually walking by in their old-fashioned vests and trousers, roaming the streets around us.

South America has no shortage of historic neighborhoods and cities. There are Unesco World Heritage sites to be found in just about every country in Latin America, and many more whose colonial buildings and other storied locations deserve international recognition. I’ve been fortunate to have the opportunity to explore and even live in or near several of these beautiful places over the past few years. Colonia, though, for its superb summer climate, lush foliage mixed with lovely cobbled streets and well-maintained old buildings, all facing a quiet inlet on the Atlantic coast, made for one of the most peaceful historic locations I’ve had the chance to visit. Sit in the shade of an old tree, taking in the fresh sea breeze amongst its silently aging walls, and its history begins to descend serenely upon you, leaving an impression of timelessness. Timeless, in the sense that your short stay starts to extend into one of those eternally lasting, long, sunny afternoons we’ve all enjoyed in the midsummer. And timeless, because at that moment you feel at one with history, at one with the place you’re in, a place you already know you’ll never forget. 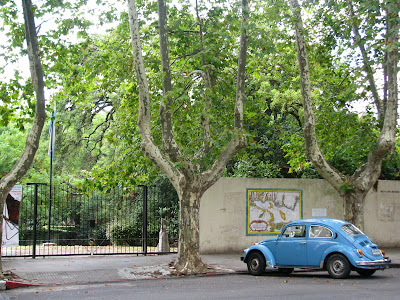 Brian Horstman is a teacher of English as well as a traveler, writer, photographer and cyclist. His interest in traveling around Latin America began while he was living in New Mexico, where he began to experience the Latino culture that lives on there. From there he spent time in Oaxaca, Mexico and has since been living in Cuenca, Ecuador and will be living in Chile starting in 2011. Cal's Travels chronicles some of his more memorable experiences from Mexico and Ecuador, as well as some side trips to other parts.
Read More Share
A Guide To Spanish Fiestas In Benidorm
Reflecting On 2013 With Photos From Around the World