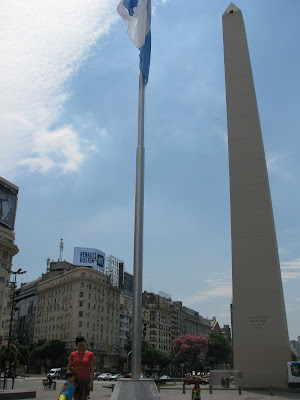 In February we planned a bus trip, across the Andes and then across the rest of the South America, with the goal of reaching Buenos Aires, the Pacific Ocean, and Uruguay. On the way we had looked forward to seeing the vineyards of Mendoza, the Jesuit architecture and countless universities of Córdoba, and sweltering city of Rosario and the mighty river that flows past it.

After competing with the thousands of other travelers the summer before in the South of Chile for transport and accommodations, this time we micromanaged our agenda, estimating how many days we ought to spend at each place.  We called ahead to rent apartments for specific dates at each destination, only to discover that the pickings were already pretty slim in each city. Adding to the complication, the majority of the people and agencies we spoke with wanted deposits made in advance, requiring Western Union-style cash transfers since we were moving money internationally from Chile to Argentina.

Fortunately we ended up making only one such deposit after all.  On the night of our departure, we boarded a sleeper bus with wide, well-cushioned, 1st class seats that recline horizontally. We were hoping to sleep through the ride, waking only to present our passports at the border high in the Cordillera between Santiago and Mendoza. We traveled at night because the mountain pass was under construction and was down to one lane, with traffic heading from Argentina to Chile by day, and from Chile to Argentina only at night. But rather than wake up to the anticipated bustle of everyone getting off the bus to wait blearily in line at customs, we heard the ticket-taker walking down the aisle, informing us that we were heading back to Santiago.

It turned out that some summer rain had washed out the road on the Argentine side of the mountains, stopping all movement across the border for a week. All our carefully arranged plans suddenly fizzled as the bus turned around and slowly wended its way back down the twists and turns between us and Santiago. I tried to sleep, but found myself endlessly going over new ideas in my mind, how we might be able to do something with our precious weeks off work.

Back home the next morning, we resolved that East across the mountains was the only way to go. We had already gone as far South and North on a bus across Chile as our constitutions could withstand, and West was a strip of crowded beaches so close to Santiago as to be surely booked full a month earlier.

If the mountains could not be traversed by land, the only way left to us was to go by air. A quick perusal of flights revealed prices at well over US$1000 per person for anything at such short notice. But since we already had one-way tickets back from Buenos Aires to Santiago at the end of our planned trip, I was able to speak with someone at LAN Airlines who turned our one-way tickets into a round trip, departing from Santiago the next morning, for only an extra $100 per person. In the end, a modest price to pay to salvage our trip. We’d miss Mendoza, Córdoba and Rosario, but we’d extend our time in Argentina’s famed capital city, by some accounts South America’s premier metropolis. 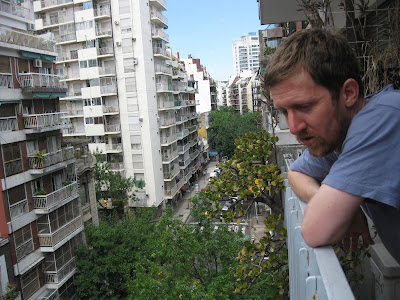 In the hours between booking our last-minute flight and boarding the plane, we managed to find an apartment for a week in Palermo, one of Buenos Aires’ trendier neighborhoods. From there we’d have several parks to explore – as well as access to the Subte, the subway system – and from there, the rest of the city’s diverse sections.

We also had a nice balcony from which to contemplate our warm, humid, urban surroundings. Buenos Aires in February can be very hot, not unlike Florida in the Summer. 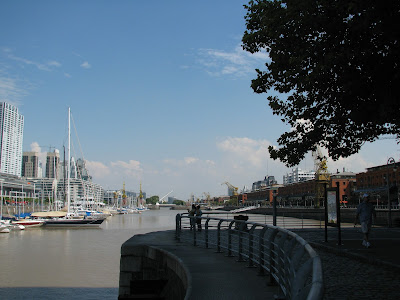 Our first stop was to buy some tickets on the ferry over to Colonia in Uruguay for the next week. The ferry was located, naturally, at Buenos Aires’ port, the historic and renovated Puerto Madero. Now largely a port dedicated to tourism and yachting aficionados, its canal is bordered on one side by the red brick storehouses of the area’s original days as a commercial hub. Those buildings have now been transformed into one high-end, high-priced restaurant after another.

Those restaurants surely benefit as much from tourist traffic as much as from the new commercial district on the other side of the canal, where you can see new glass skyscrapers springing up and providing lots of new office space in what is already an expansive downtown area. 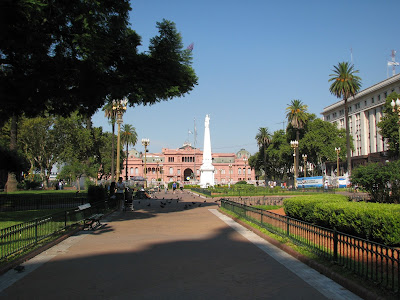 Taking advantage of the port’s proximity to downtown Buenos Aires, we walked over to the Casa Rosada, Argentina’s presidential palace, here seen in the distance across the Plaza de Mayo. The plaza, being public space so close to where many of the decisions affecting the country are made, has naturally been the staging ground for many historic protests. Perhaps due to this, a permanent-looking fence was in place during our visit, itself covered in dozens of signs rendering many of the common complaints of the Argentine public in vitriolic slogans. 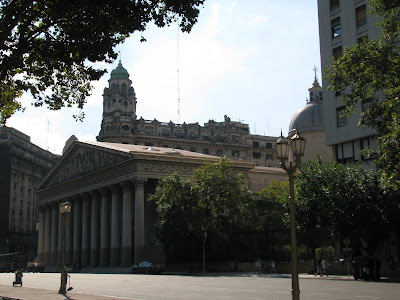 The Plaza is also surrounded by a number of other stately buildings, from the Central Bank to this, the Municipal Cathedral. With its Greek columns and other pre-Christian design elements, I had it pegged as the Supreme Court or some other legal institution. But no center square in Latin America is complete without a Catholic church, and I later learned that the twelve columns represent the twelve apostles. 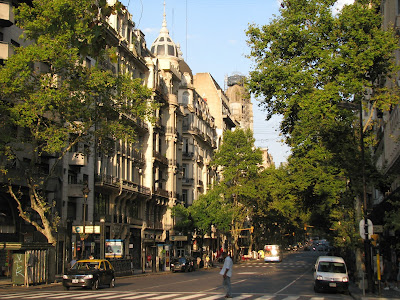 Our walking tour took us next along the Avenida de Mayo, one of the city’s main thoroughfares. It happened to be Sunday in Summer on the day of our visit, and so we enjoyed a very laid-back stroll along what must be a heavily trafficked corridor on a normal working day. We also took the opportunity to have a late lunch, sampling for the first time the famed pizza of Buenos Aires.

Seeing as how this particular street is known for its many cafés and restaurants, and given the general prestige of the neighborhood, I expected such notoriety to equal overblown prices.  But not at all, and the pizza was damn good, especially paired with a cold beer,.  In keeping with the spirit of the experience and the avenue we were on, we couldn’t resist a cup of coffee as a bajativo. 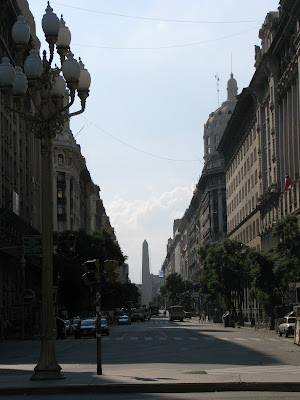 While we were sitting at that restaurant, we casually watched the news and saw the announcement that the Pope would resign his position. I found it very fitting that we saw such news in a Buenos Aires restaurant, being as it was that the Pope’s successor would turn out to be from that very city.

We also had the opportunity to witness firsthand what we had heard was so fundamental to porteño culture. At a table by the window, we noticed a gentleman reading a newspaper with an espresso on the table. He was there when we arrived, and he was still there when we left. He hadn’t ordered anything else during all that time, as far as we knew, and there was no pressure for him to. And why should there be, especially since it was a quiet Sunday afternoon?

But even if the restaurant had been full, I imagine such a scene would still be common. Perhaps taken from the city’s Italian heritage or Parisian pretensions, the custom of spending time outside the home, in public, in the park, in a café, is something embedded in the culture. 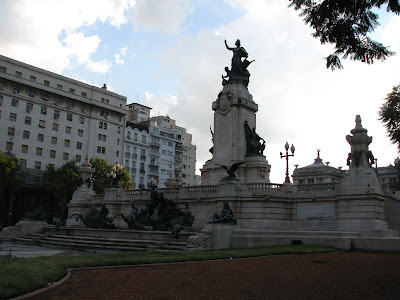 By the time we had finished eating and made it to the other end of the Avenida de Mayo where it opens up into the Plaza del Congreso, it was starting to get late. There was just enough light to get a good look at the striking architecture of the Congress building and the large monument in front of it.

The monument itself was fenced off, but the gate was open and a few people were gathered at the top of the stairs leading up to it. So we walked in and climbed the stairs. And were promptly told by a guard that we needed to get out. 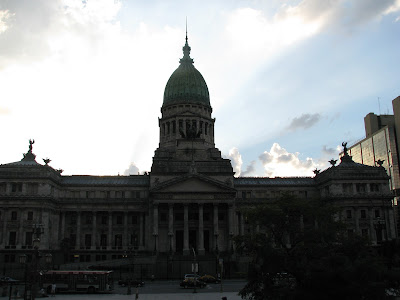 Apparently the other people were there to do some filming and had special permission to be there. Being another public space in front of another building where important political decisions are made, the Plaza del Congreso is as much a gravitational point for protests as the Plaza de Mayo, and this monument has been hit with a lot of spray paint over the years. The best way to keep it clean, apparently, is to keep people away from it altogether. But we were clearly not out to cause any trouble, and so the security guard kindly let me snap a picture from up there before letting us out and closing the gate behind us.

With the sun going down, we got back on the metro and back to our home away from home in Palermo. It was a fine first day in Buenos Aires. With a week to spend getting to know the city, downtown was an excellent place to start. 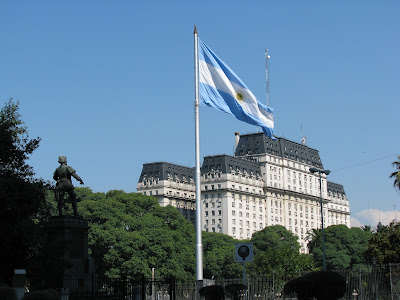 Brian Horstman is a teacher of English as well as a traveler, writer, photographer and cyclist. His interest in traveling around Latin America began while he was living in New Mexico, where he began to experience the Latino culture that lives on there. From there he spent time in Oaxaca, Mexico and has since been living in Cuenca, Ecuador and will be living in Chile starting in 2011. Cal's Travels chronicles some of his more memorable experiences from Mexico and Ecuador, as well as some side trips to other parts.
Read More Share
Six Top Campsites in Europe For Your Bucket List
A Mojito Making Class At Puerto Rico’s Airenumo