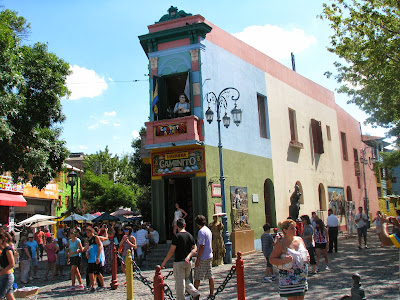 Another of our days in Buenos Aires was dedicated to exploring the neighborhood known as La Boca. No trip to Argentina’s capital would be complete without visiting this place, with its colorful buildings and equally colorful history, characterized largely by its Italian (mainly Genovese) influence. Today its streets are given over to the overwhelming amount of tourism the neighborhood receives. 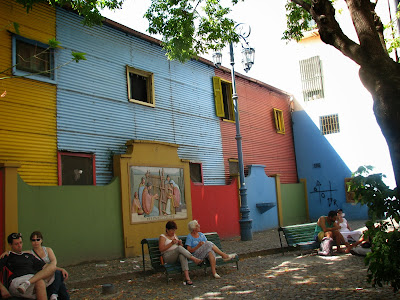 Drawn to the neighborhood mainly for its picture-perfect, brightly colored walls and art situated on cobbled streets, tourists have many places to rest and take in their surroundings. The varied colors of the houses apparently date back to the original days of the neighborhood, when the immigrant families moved into conventillos as they did in San Telmo.

Here in La Boca they painted their homes with the leftover paint they used to paint the boats they used to make their livelihoods. As this paint consisted of whatever colors and quantities remained after their boats were painted, the houses ended up with a mix of colors. 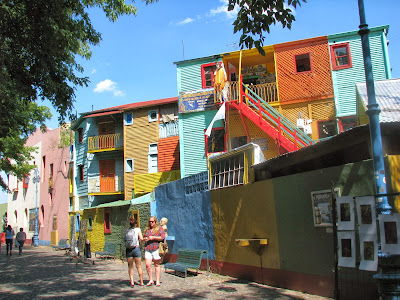 In more recent times the painter Benito Quinquela Martín, who was a resident in the neighborhood and found inspiration for his art in the port working-class character of the area, encouraged his neighbors to revive the tradition of assorted colors on their houses and buildings. So it is him we can probably thank, not only for the colorful and artistic character of the neighborhood, but also for the amount of tourists who flock there to see it. 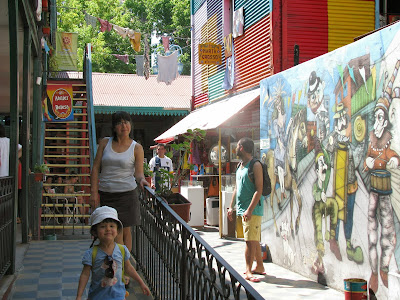 The conventillos are still there, but their original purpose, as blue collar tenement houses, has given way to antique and souvenir shops. 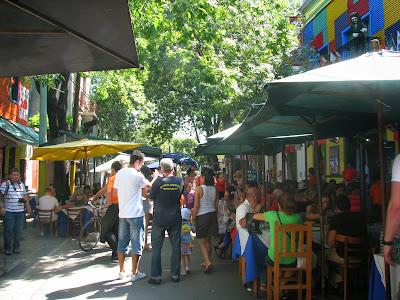 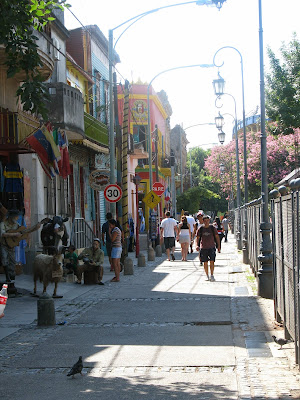 Dark, narrow alleyways have become well-appointed, well-lit thoroughfares. It may have lost its authentic flavor, but La Boca has been transformed into something of a cultural playground. Buenos Aires, for export. 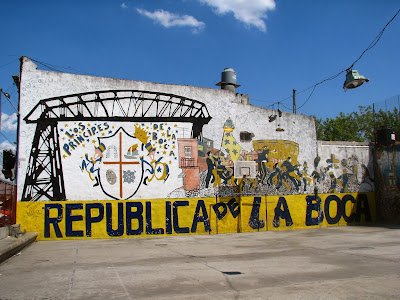 More than a colorful mural, this wall painting illustrates a moment in history when La Boca asserted a very temporary secession from the rest of Argentina at the end of the 19th century. The Genovese flag, whose influence can be seen in the shield of La Boca pictured here, was raised in rebellion against outside authority. It was almost immediately taken down personally by the Argentine President, who took it upon himself to address the demands of the inhabitants of the neighborhood. 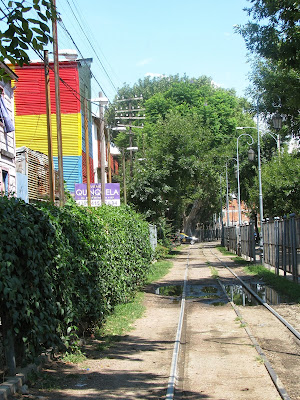 The neighborhood of La Boca, at least the part given over to tourism, consists of only about six narrow blocks, each heaving with visitors at peak hours. Some efforts have been made to expand the tourist zone beyond its current borders. As we were seeking our own place to have lunch, a couple of promoters pointed us in the direction of a restaurant only a block away from the dense pack of outdoor patios.

A palpable change in atmosphere overcomes you when you walk out of the tourist playland. La Boca, like many of the neighborhoods south of Buenos Aires, is a low-income area. With the blocks around El Caminito being a notable exception, tour guides will advise you not to wander far from those colorful streets. Perhaps for that reason, we felt wary enough to heed that advice and have lunch in the more populous zone.

If we had gone to that other restaurant, maybe some ill fate would have befallen us. Or maybe we would have gotten a cheaper lunch. As it was, we found a tasty, but very expensive meal at a restaurant that charged us even for the cubierto. I understand that word to refer normally to the silverware, but in this case was a general fee just to partake in the restaurant, beyond the cost of the food and the tip expected from the waiter.

With such a high demand from the clientele in such a small neighborhood, any business in the area is in a good position to ask for more money than you would usually expect to pay. Closer to the old docks while we waited for the bus to take us downtown, we saw cheaper fare for sale: panchos (hot dogs) and other fast food sold from pushcarts. But with bellies full of Argentine asado, even at an inflated price, we were content. 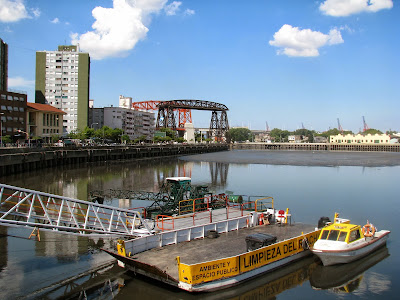 Brian Horstman is a teacher of English as well as a traveler, writer, photographer and cyclist. His interest in traveling around Latin America began while he was living in New Mexico, where he began to experience the Latino culture that lives on there. From there he spent time in Oaxaca, Mexico and has since been living in Cuenca, Ecuador and will be living in Chile starting in 2011. Cal's Travels chronicles some of his more memorable experiences from Mexico and Ecuador, as well as some side trips to other parts.
Read More Share
Music Around The Clock at Austin’s MEOWCon
Japan’s ‘Herbivore’ Millennials Prefer Digital Girlfriends Over Sex