In addition to the time we spent in Colonia, we made a point to visit Uruguay’s capital city of Montevideo. We found accommodations in the beachfront neighborhood of Punta Carretas, a quiet, residential area at the city’s southernmost tip. In fact, if you look at the photo below, the thin vertical line next to the palm trees on the horizon is a lighthouse. 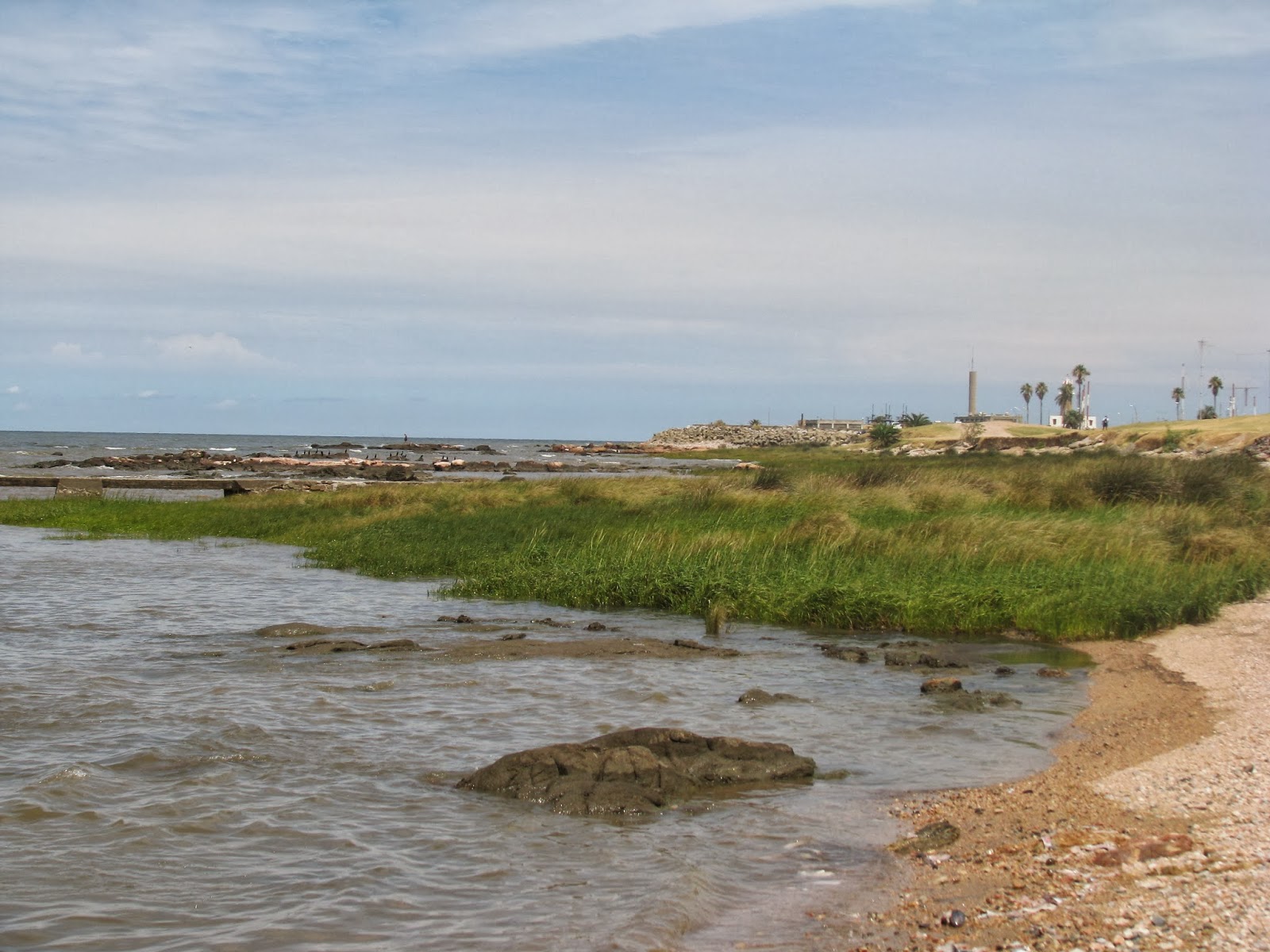 It lies at the end of a narrow peninsula where the city ends and the Atlantic begins. 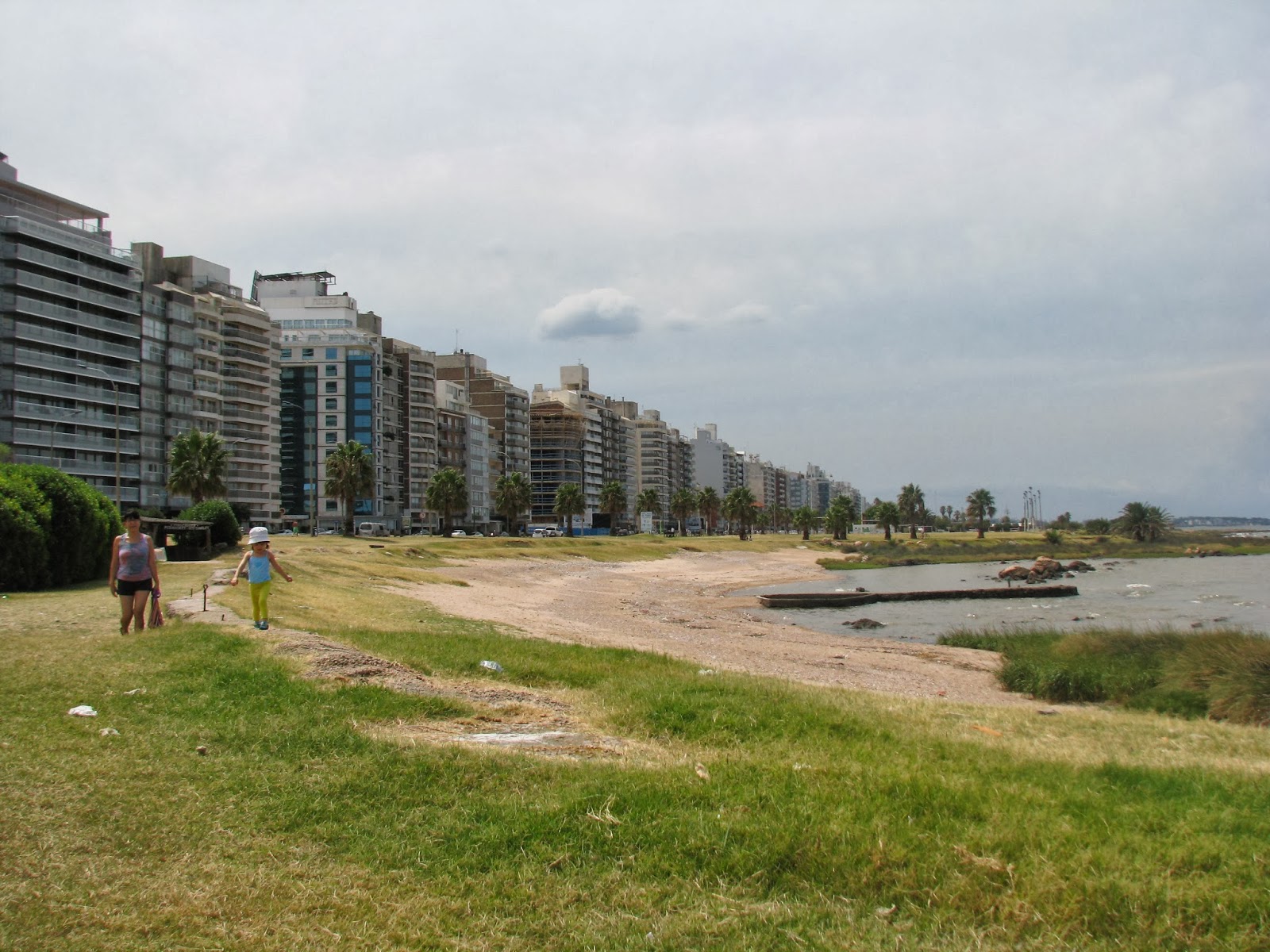 Turning to face the city, you see that mid-rise apartment buildings have come to dominate the oceanfront property. Head a block inland and this ambitious construction quickly gives way to one- and two-story homes, but walk in either direction along the city’s long, winding rambla and you’ll find these ten-floor buildings to be a constant feature.

Despite the number of these buildings along the coast, and the fact that many of them must be given over to vacation rental, Montevideo was the one destination on this trip where we ended up staying in a private room in a hostel rather than a rented apartment. 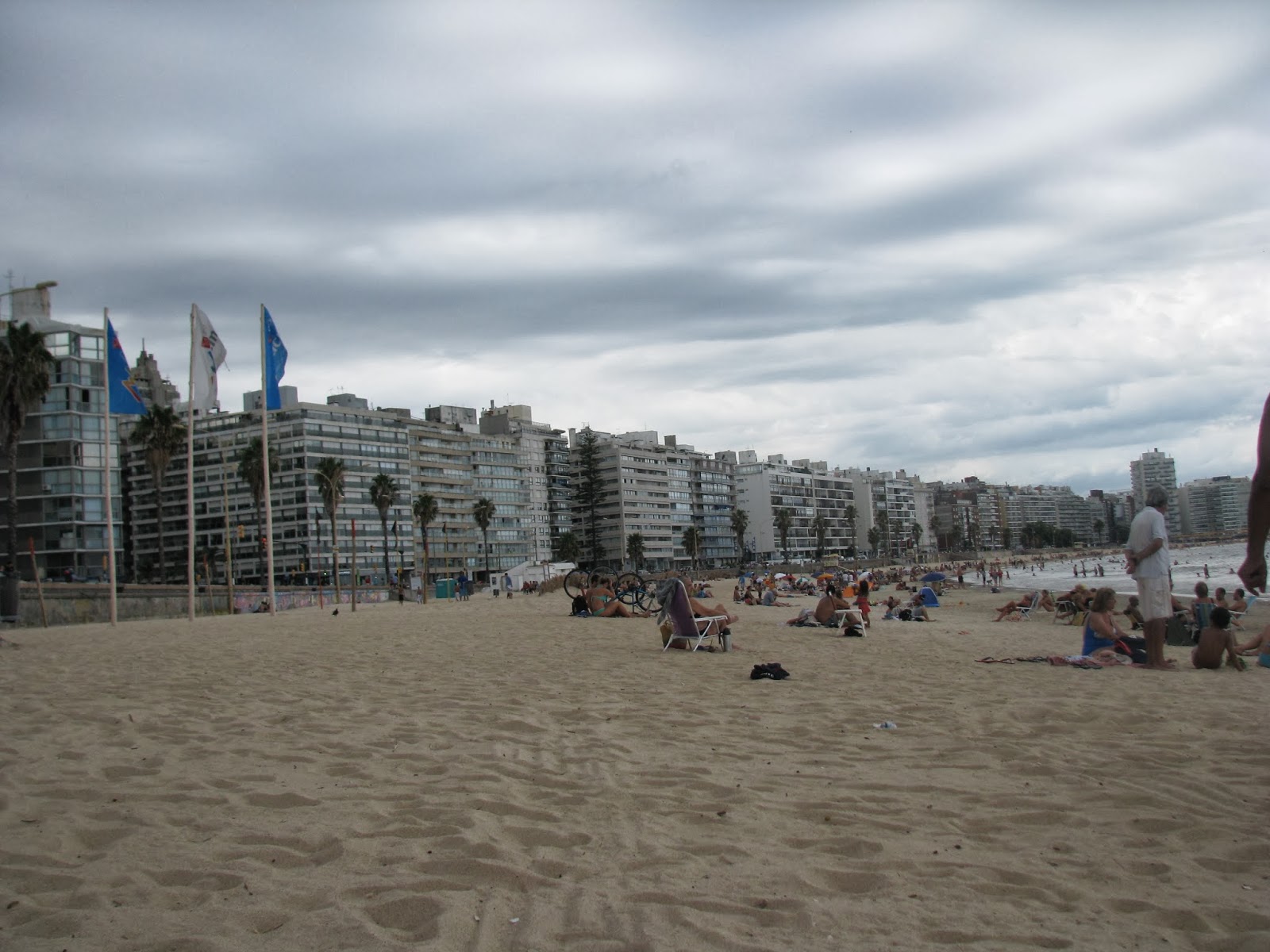 For most of the time I’ve traveled in South America, whenever I’ve visited a new place – whether alone or more recently, with family – staying in a hostel had always been my favorite way to spend the night. Being able to cook up a few meals in the shared kitchen is a great way to save money on the road, and inevitably, you’ll end up meeting some interesting characters as well.

But as time has gone on, we’ve learned that for about the same price per night in a private room in a hostel, you can rent an apartment in most cities. This was an accidental discovery made during our trip to Bariloche the year before, but once we saw the benefit of the space and privacy of a temporary apartment rental, it’s quickly become our preferred accommodation away from home. 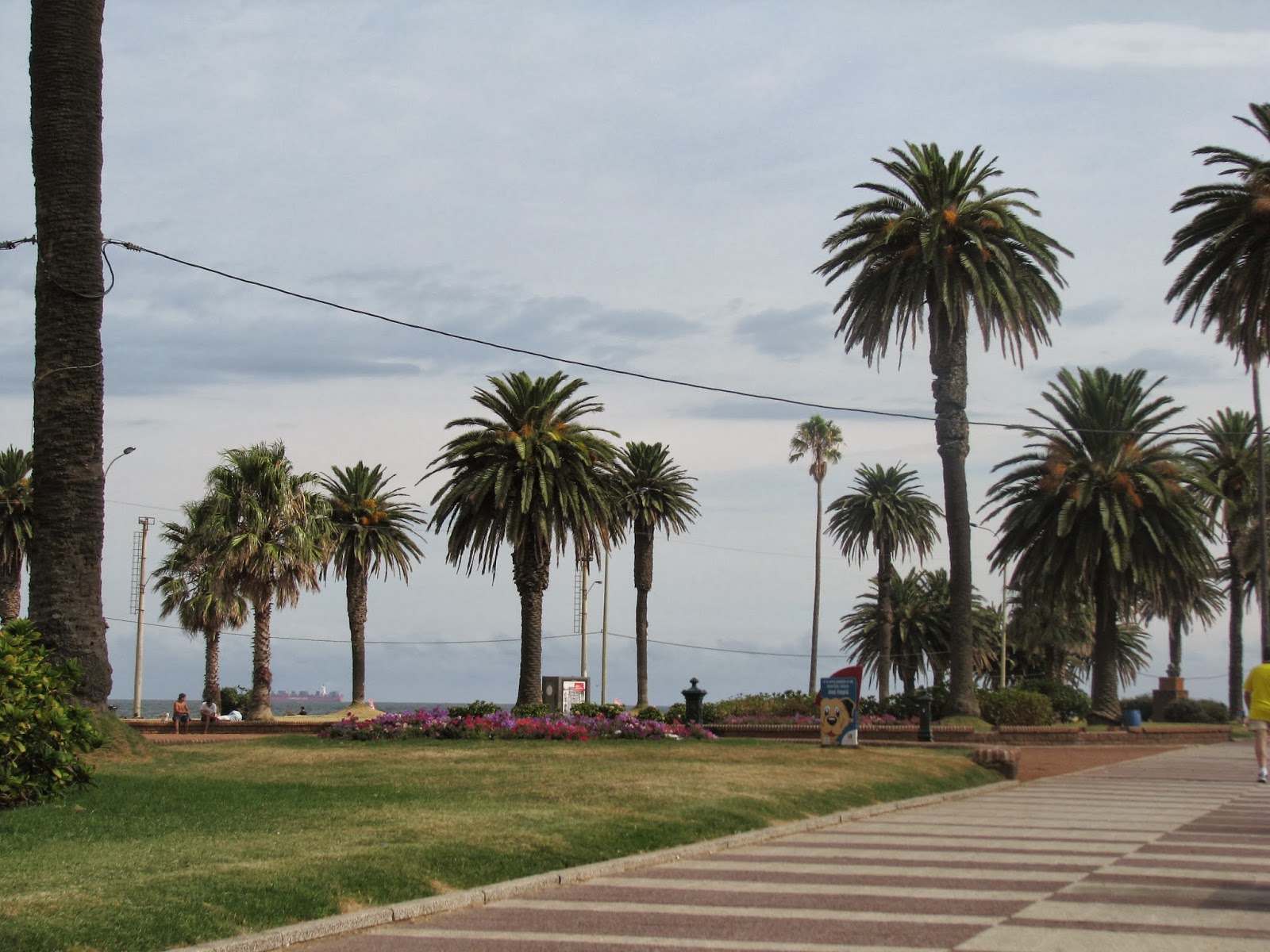 For whatever reason, however, as I was contacting people while we were still in Buenos Aires, in anticipation of our stay in Montevideo, I had a hard time pinning anyone down on the phone. The only person I managed to get in touch with and make a reservation was the owner of a hostel. What we got was a room in an old house two blocks from the beach, not so bad!

With the exception of a young man from Córdoba, Argentina and an older woman from Buenos Aires, all our fellow guests were from Chile, despite the fact that Chile is much further away. Evidence perhaps of the direction the fleeting winds of economic prosperity have been blowing in recent years. Interestingly, none of the Chileans batted an eye at the higher prices to be found in Uruguay, while both of the Argentines were incredulous. Indeed, a visit to a restaurant or supermarket revealed most food to be about double the price of what we’d seen in Argentina. 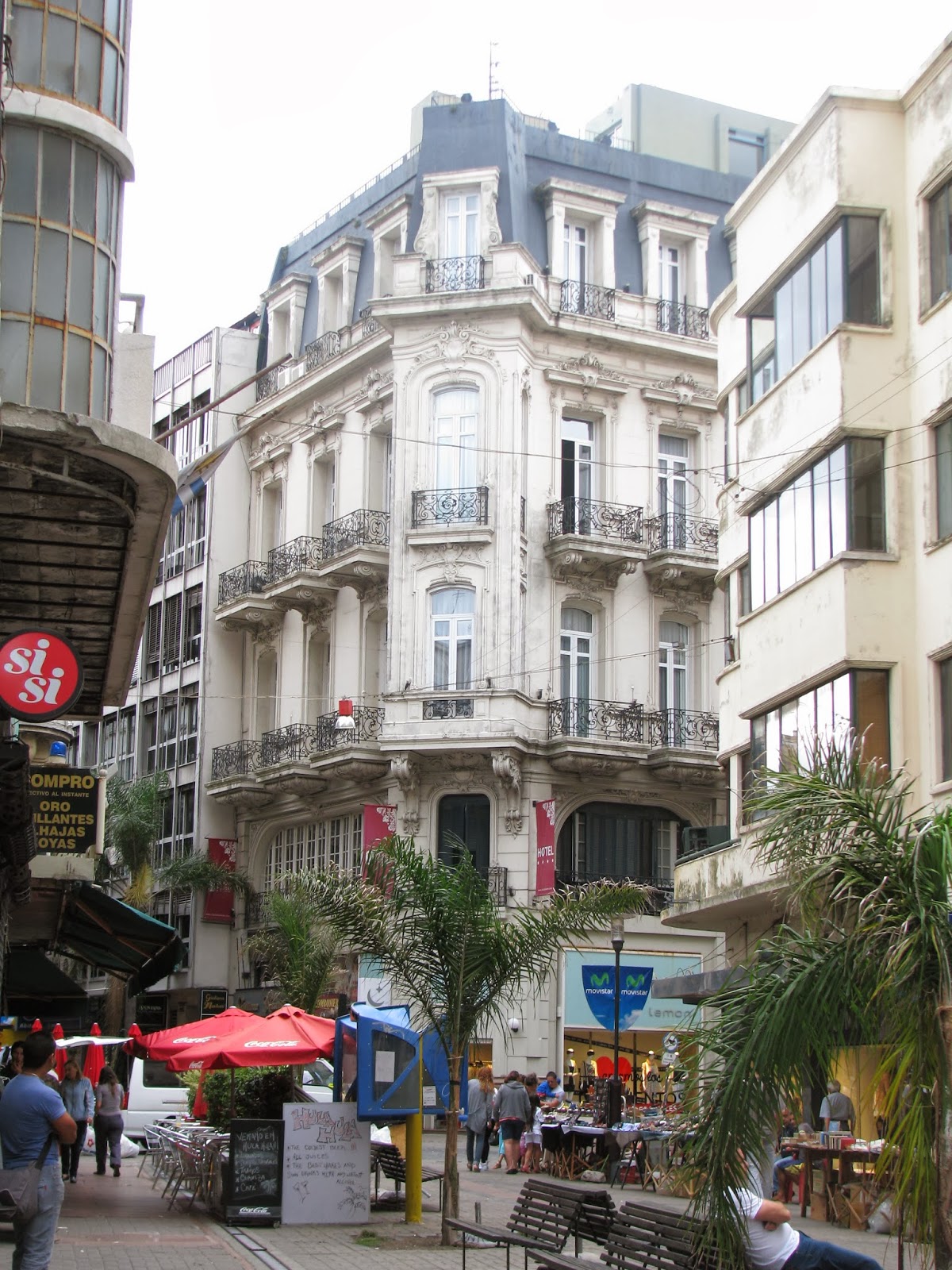 Our second day in the city was spent in the urban center. What we found was a peaceful downtown, with quiet streets, orderly commerce, and – with some notable exceptions – modest architecture compared to what we’ve seen in Buenos Aires or even Santiago. Montevideo has always lived in the shadow of Buenos Aires across the Río de la Plata. Maybe as a result, the people of Montevideo are a laid-back bunch. While sharing a virtually identical accent with their Argentine neighbors, and steeped in a history deeply connected with that of Argentina, the pace of life here is decidedly slower.

In a place where even the top politicians intermingle with the public in the street with little fanfare, the Uruguayan people generally seem to ignore pretense and just get on with their daily business. That said, Uruguay has been in the news of late, with President José Mujica making headlines for his unassuming lifestyle, living on a flower farm with his wife rather than the Presidential Palace and driving his old VW Beetle. And more recently, Uruguay seems set to become the first country in South America to legalize the recreational use of marijuana. 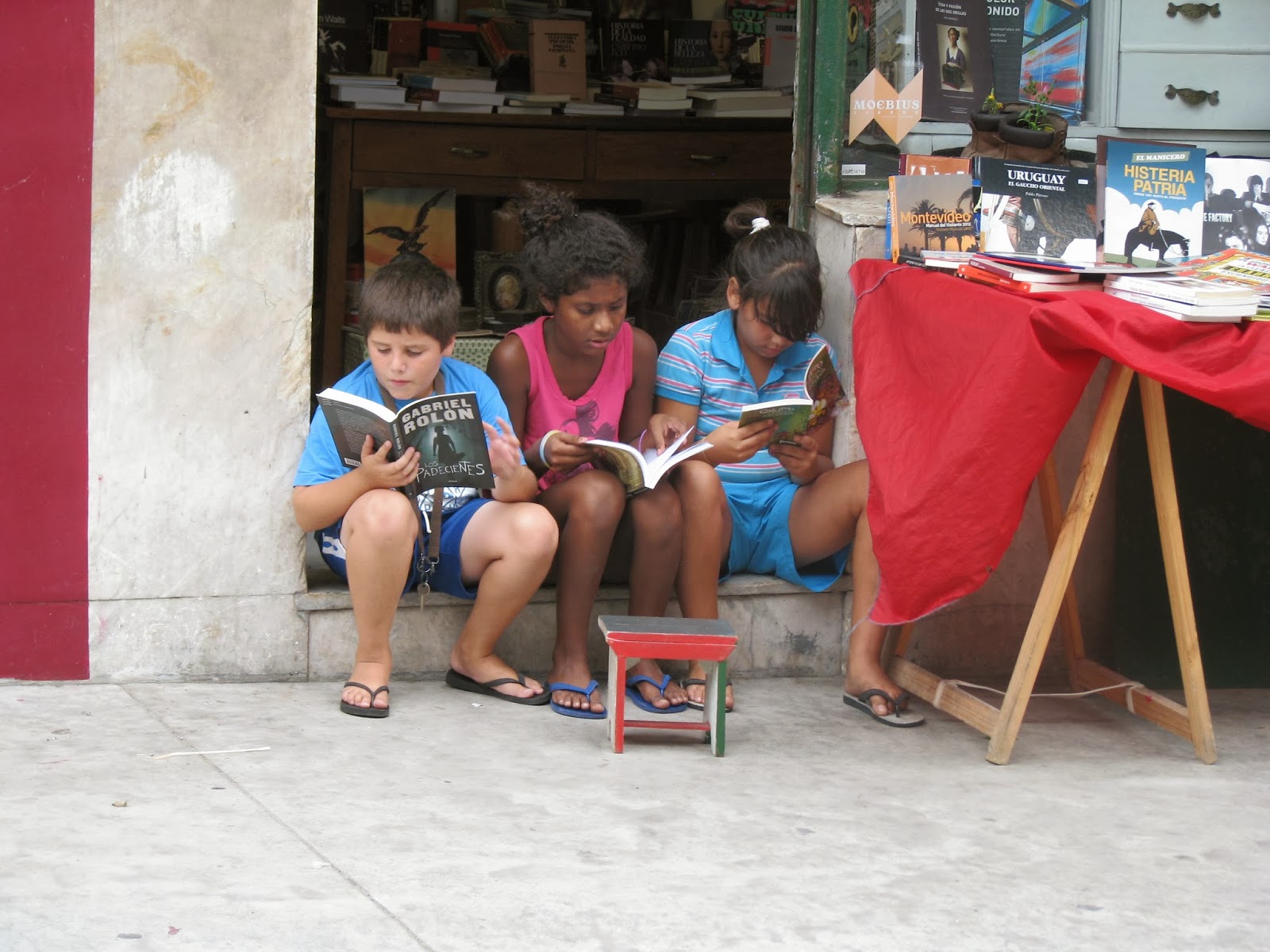 Uruguay had long caught my attention as being the home of one of my favorite writers in Spanish, Eduardo Galeano. As we roamed the streets of Montevideo during our short visit, I did a double take in the direction of every bald-headed man I saw, hoping I might have the luck to cross paths with the author of the first books in Spanish I managed to decipher.

While I never saw Mr. Galeano, I did plenty of double takes. Uruguay has a small population with a low rate of growth, meaning an aging populace, and lots of bald heads. That notwithstanding, here we see the next generation of Uruguayans casually soaking up some fine literary tradition during their summer break. 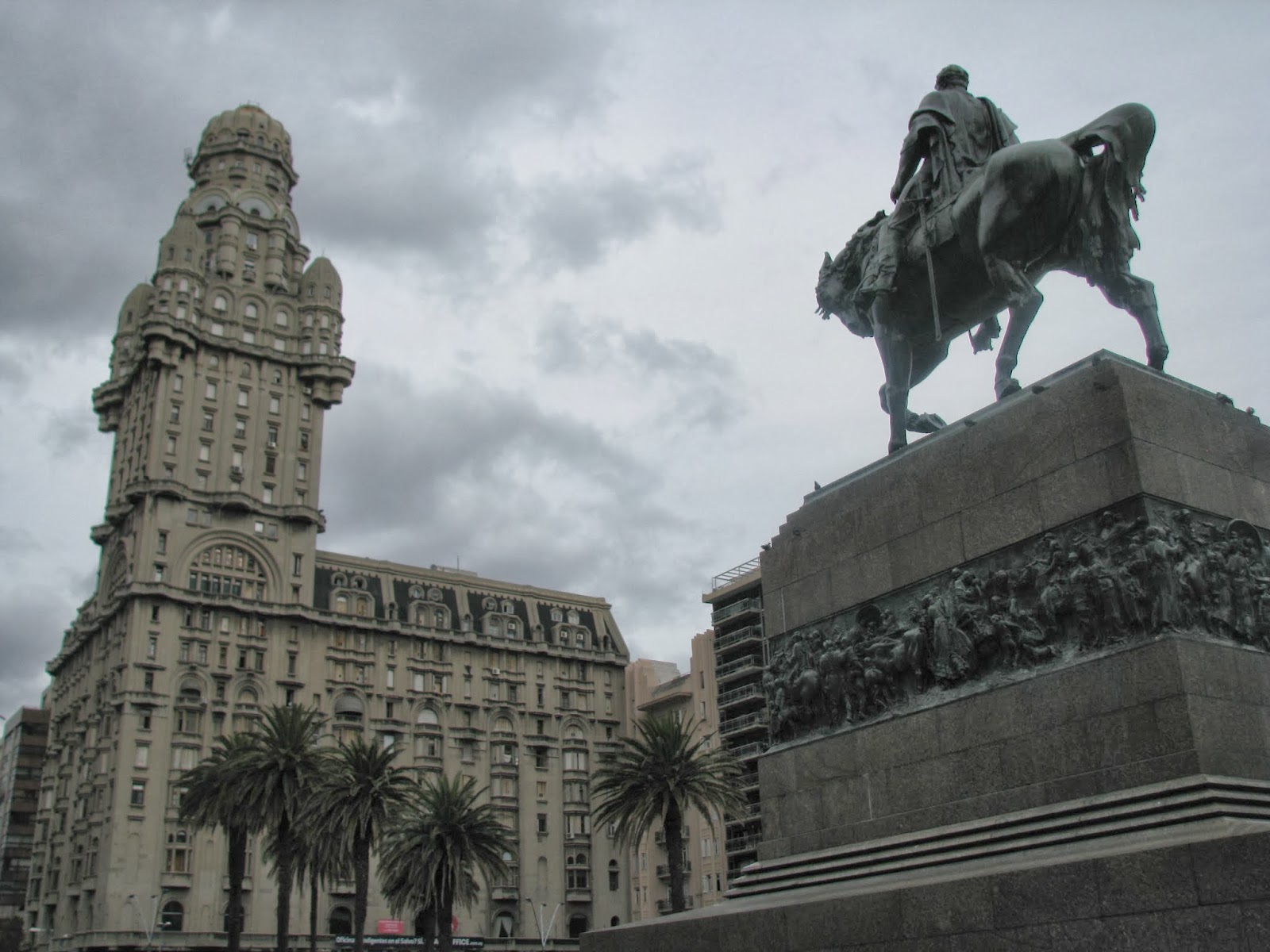 Of course, no visit to Montevideo would be complete without a visit to the Plaza Independencia and the Palacio Salvo. Far and away the city’s most iconic landmark, the Palacio Salvo is one of South America’s original skyscrapers. At 100 meters in height and with its distinctive architectural flourish, it stood as the continent’s tallest building for many years. Today, some lucky citizens even call it home.

The man on horseback is José Artigas, a native to Montevideo turned gaucho (read: South American cowboy). He became something akin to the George Washington of Uruguay. He helped battle both the Spanish and the British as South America began to assert its political independence, and later was instrumental in carving out the Uruguayan identity as separate and independent from what would become Argentina.

As I reflect on our days in Montevideo, I can’t help but think that we peeled back very little of the surface of this understated city. While it may never equal the excitement and energy of Buenos Aires or the tropical beauty of Rio de Janeiro, Montevideo is quietly waiting to be discovered. The patient traveler who spends the time to fully explore this well-organized and comfortable capital city of 1.8 million is bound to be rewarded for his effort. With some luck, another trip to this part of South America will be in our future. 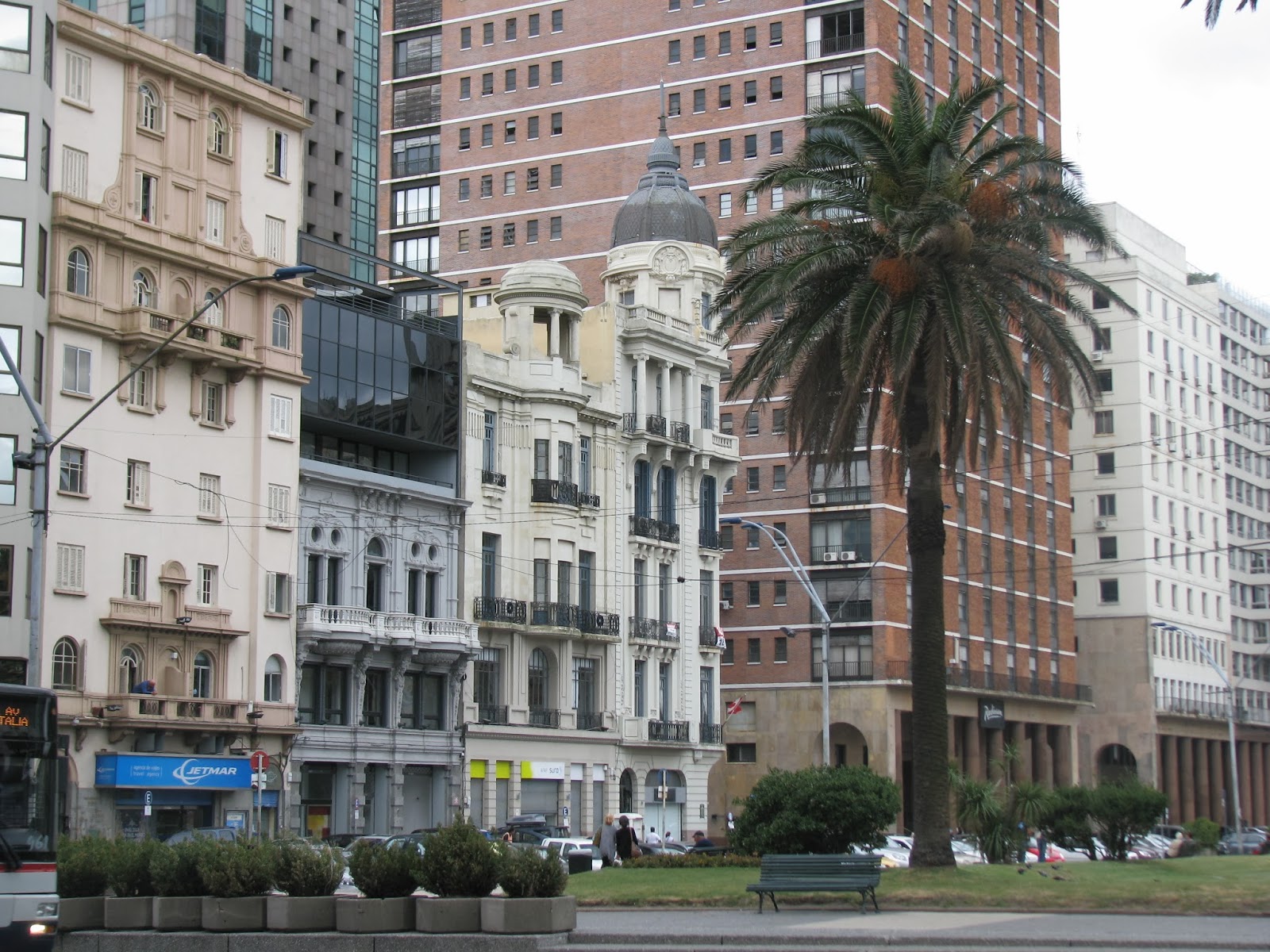 Brian Horstman is a teacher of English as well as a traveler, writer, photographer and cyclist. His interest in traveling around Latin America began while he was living in New Mexico, where he began to experience the Latino culture that lives on there. From there he spent time in Oaxaca, Mexico and has since been living in Cuenca, Ecuador and will be living in Chile starting in 2011. Cal's Travels chronicles some of his more memorable experiences from Mexico and Ecuador, as well as some side trips to other parts.
Read More Share
A Wine Buyer and Adventure Tour of France
Costa Rica: From Mud Baths & Volcanoes to Culture & Food