Undoubtedly, one of the greatest draws to Peru (for all types of tourists), are the ancient  pre-Colombian sites. Peru is a land of  mystery, home to so many ancient  civilizations including the Moche, Chimu, Incas, Nasca, Paracas, Lima, Wari, Chavin, Lambayeque cultures to name a few. Surprisingly all of these cultures have left behind clues to the Gods they worshiped and the offerings they made. I write about many of the the history and traditions of many of these cultures here, as we continue to visit  these ancient places throughout Peru.

Throughout ancient times, Peru has excelled in it’s agricultural development., and corn is one of the main crops.. There are clues that each of the Pre-Colombian cultures of Peru, cultivated corn and prodcused a drink from it. The Ancients  held it’s properties sacred  and many of the ancient cultures of Peru have referecnes to a drink produced from corn and designed special vessels contain it. The name for the ‘corn beer’ in  Quechua is Chicha.

As Miro and our visiting family explored the Sacred Valley, tasting Chicha was high on my to-do list. And nearly our last day together we finally did. 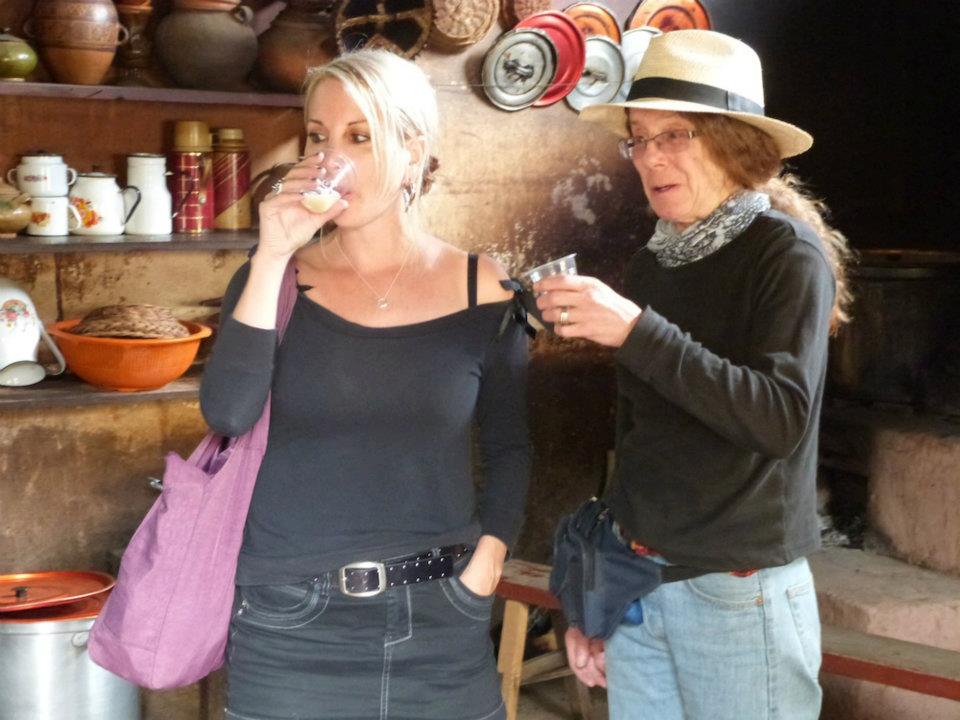 The  traditions of Chicha reflect the mystical and glory of  the ancient cultures of Peru. This corn drink was earlier prepared to be consumed during festivals and rituals. In the Inca tradition,  Chicha was made by virgins under the brightness of the Sun.  One fo the techniques for producing Chicha in ancient times,  corn was chewed by the virgins to make a starch and the saliva helped to ferment the mixture. Then warm water was mixed with the pulp was kept for a few days that got converted the mixture into a magical alcoholic drink. Today, this drink is produced mechanically and made available in many local  restaurants and bars but we were told the homemade versions taste better and are of more authentic quality. Chicha is cheap to produce and this homemade beverage can be found in those houses throughout the Sacred Valley and Cusco that flaunt a red cloth, flowers or ribbons tied on a high poll outside their house. This is known  as a Chicha flag.

Throughout Peru, Chicha is produced from different types of corn and the processes vary.  Some processes some stopping before the point of fermentation, so there is not an alcoholic content.  A popular sweet purple drink found in every restaurant in Lima is called Chicha Morada, but don’t be fooled by the name, there is no alcohol content.

In Amazonian land and in rural Ecuador, Chicha is made from Cassava roots and are used as cheap liquor. Other places like Bolivia, Panama, Chile, Colombia and Venezuela also prepare good Chicha. It is generally sold in earthen pots.

Some say, Chicha is know for it’s  medicinal benefits like lowering blood pressure and also acting as an anti-inflammatory agent in the prostate.

Whatever your reason is,  I highly recommend trying it. It’s one of those  authentic flavors of Peru: Modern and ancient combined in a glass, and that added kick!
Lainie Liberti

Today Lainie considers herself a digital nomad who is living a location independent life. She and her son write and podcast their experiences from the road at Raising Miro on the Road of Life.
Read More Share
Argentina: Stunning Bariloche in the Argentine Patagonia
Indonesian Culture & History: 10 Interesting Things to Do in Java