Valle de Elqui was the last stop on our trip to el norte chico of Chile. As you travel north from Santiago the landscape grows drier and drier, punctuated by valleys made green by virtue of the rivers and resulting agricultural activity of the area. The Elqui Valley is famous for its production of pisco, a distilled spirit made from grapes, usually mixed into cocktails such as piscola (pisco and coke) or pisco sour. As you head up the long valley east from La Serena, the dry hills are lined by the continuous strip of green vineyards whose produce is destined for the pisco bottle. So significant to the local economy is pisco that the town we were bound for goes by the name Pisco Elqui, changed from the less descriptive name of La Unión in the 1930’s. 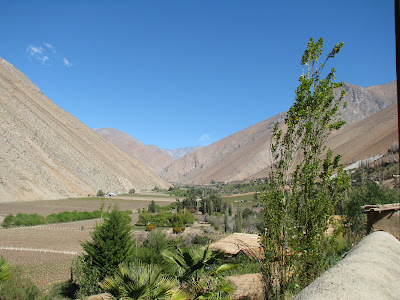 We rented a cabin about a kilometer outside of the town itself, with views over the irrigated vineyards spreading out across the valley floor. Being early Spring, many of them had not yet put out their leaves; I imagine by December the valley is quite a bit greener.  The hillsides, by contrast, are perpetually brown and barren, belying the arid climate of the region.  Sights such as this one demonstrate how essential the river is for life in this part of Chile. 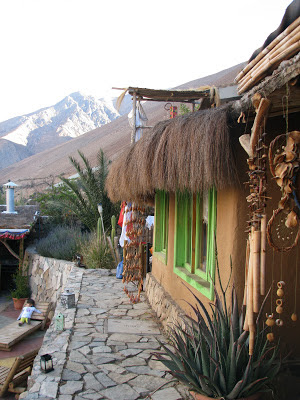 Our cabin was one of several on a small property outfitted with some grills for barbecue, a pool (albeit with water a little too cold for swimming at that time of year), a bar, and some nice common areas to enjoy the sublime climate of the area. With its crisp, clean desert air, Pisco Elqui is a fine place to sit in the cool shade and contemplate the eternal hillsides. In fact, the Elqui Valley is at least as famous for its mystical qualities as it is for its pisco. Several communes are to be found in the area, and the various towns dotting the valley all have an undercurrent at times hippy, at others new age.

At night the temperatures drop quickly, and an impressive panoply of stars emerge in the clear, black sky.  Due to its low humidity, low population and therefore low level of light pollution, the area is also well-regarded for its potential for astronomical observation.  Several high-powered telescopes are located near La Serena, and some observatories even open their doors for tourism.  We didn’t manage to see any of them for ourselves, what with the late night tour schedules and our 3 year old companion’s early bedtime, but we did enjoy the starry nights, all the same.

As time has gone on we’ve developed a preference for staying in apartments and private cabins during our travels. Both options give us access to our own kitchen during our stay, which is what has always attracted me to staying in hostels in the past. Going out to eat is one of the pleasures of vacation, but it’s also nice (and much cheaper) to be able to cook in the comfort of your own accommodations when you choose to. But if you compare the cost of a private apartment or cabin to that of a private room in a hostel, at least in South America, the prices end up being about the same. All things considered, we’ve ended up appreciating the privacy we get from having a space to call our own while we travel. 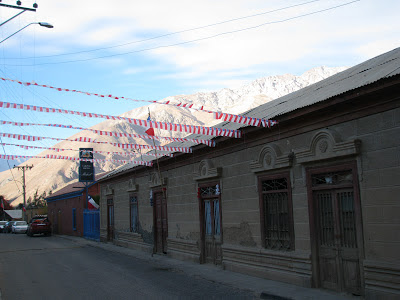 The town of Pisco Elqui is made up of just a few winding, dusty roads lined by old, single story brick houses. A quiet town animated by tourism, especially the during the fiestas patrias of September.  While we were there, the streets were decked out with Chilean flags and red, white and blue banners and ribbons everywhere you looked.

The town square is graced with restaurants bustling with clients, and street vendors selling everything from crystals to coffee mugs.  In the square itself, young South American travelers play guitar and wonder where they’ll spend the night. 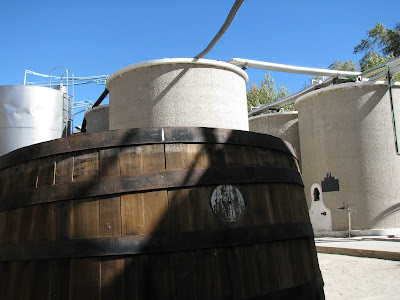 Besides the simple act of relaxing and enjoying the peace and quiet of the valley, the main tourist attraction of Pisco Elqui is the Mistral Distillery.  It’s named after Chile’s 1st Nobel laureate – and the first Latin American to win the Nobel Prize for Literature – Gabriela Mistral. While not born in Pisco Elqui, she was born just down the road, in Vicuña. Vicuña already has the Capel distillery, which cranks out a cheaper and more commercial pisco, so the Mistral name was up for grabs. Here we see big fermentation tanks, where yeast has its way with grape juice under a controlled environment, producing alcohol, carbon dioxide, and warm air. And in the foreground is, for dramatic effect, an old barrel.

As an occasional beer brewer, I can wrap my head around fermentation. I’ve studied and observed how yeast can have a profound transformative effect on a sweet solution, bubbling, churning up sugar molecules into alcohol. It will never cease to amaze and impress me, but I’ve seen it. I get how it works. Distillation, on the other hand, remains something of a sublime mystery. The vocabulary surrounding it adds to the riddle: Alembic. Retort. Still. Liquor. Esters. Spirits. All evoke an alchemy as much magic as science, and yield a product deserving of respect and admiration, as much for the potent effect it can have as an imbibe as for the time, patience and care it took to create.

Sure, I can grasp on an intellectual level the dynamics involved in separating alcohol from water. That is one thing. It is another to be part of the process, to catch a whiff or glance of some rich concentration of the essence of the grape. In the few cases when I’ve had the opportunity to visit a distillery, I’ve yet to be lucky enough to observe the distillation process itself, in action. To see what goes on inside that fat-bellied vat through a glass porthole and try to understand on a more visceral level what it is. These, like all the others I’ve seen, were empty. 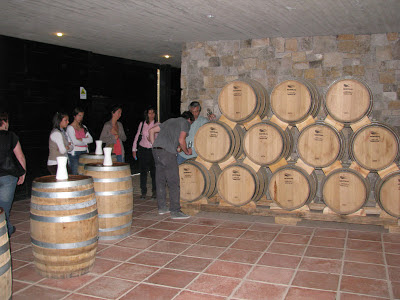 While our little group was unable to observe the process directly, we were privy to the finished product at the end of the tour. Commemorative stemware in hand, surrounded by barrels of pisco in repose, we tasted sip after sip of Destilería Mistral’s various offerings, from the youngest to the most premium bottle they produce. I will admit, I’m not a fan of pisco. I’ve tried, but it’s simply not a liquor I can appreciate. While I can accept it as a respectable ingredient in a cocktail, I have never been able to find a pisco that has been palatable straight up, either to shoot or to sip.

Over time I’ve lined up liquor mentally into two columns, with tequila, mezcal, rum, vodka, and to a lesser extent, whiskey and even raw aguardiente as tasty, attainable drinks with stand up flavors of their own, if you can find the right bottle, on one side. On the other unapproachable one lie gin and pisco, among others, which I can’t seem to get my palate around. Maybe I just haven’t found the right bottle yet. I’m willing to keep an open mind.

The picture here reveals another quality I’ve come to appreciate in tours of distilleries, which is the fanciful atmosphere each one unfailingly manages to craft, from ancient alembics on display, consistently impressive facilities and location, and as seen here, creative ways to dispose of old barrels.

All in all, our time in the Valle de Elqui was a fine experience. We greatly enjoyed the town of Pisco Elqui, and in the three days and two nights we spent there, we were able to do, see, and experience much of what it is as a community. My only wish, as is always the case at the end of a trip to a new place, is that we could have seen more. The valley is home to many towns, each with its own character. As you go even further upstream the roads narrow and the towns at the end of them, or so I’ve heard, are even more peaceful, authentic, and uniquely characteristic of the region.

Brian Horstman is a teacher of English as well as a traveler, writer, photographer and cyclist. His interest in traveling around Latin America began while he was living in New Mexico, where he began to experience the Latino culture that lives on there. From there he spent time in Oaxaca, Mexico and has since been living in Cuenca, Ecuador and will be living in Chile starting in 2011. Cal's Travels chronicles some of his more memorable experiences from Mexico and Ecuador, as well as some side trips to other parts.
Read More Share
JW Marriott’s New Wine Club Tasting Kit
The Sacred Uttarakhand in North India and Home of Shiva