Back when I was living in Santa Fe, I discovered Allá, a bookstore downtown that specializes in rare books from Latin America.  I would have probably never wandered into its hidden upstairs location if I hadn’t first become fascinated by a book in Spanish that I was determined to find.

I first heard of the book during my first trip to Mexico, where I had been on an immersion Spanish course during the summer.  Little did I know before leaving that my trip to Mexico would occur during the infamous teacher strike of 2006.  News traveled slowly enough about this strike that tourists were still obstinately crawling through the historic center of Oaxaca, attempting to go about their regular tourist business while ducking under the tarps and canopies of the teachers’ makeshift campgrounds that lined virtually every downtown street. 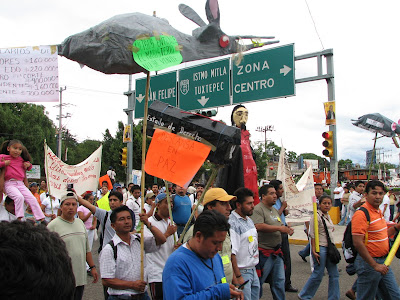 The institute where I was studying was just a few blocks from the focal point of the teachers’ demonstrations, and one day after our morning classes were over, this sight greeted us just outside the walls of our quiet language school.

The protest was truly impressive, with people marching in a line as far as the eye could see in both directions, and featuring hundreds of signs and dozens of paper mache symbols of what the teachers were rising up against.  For someone like me, experiencing Latin America for the first time, I found the energy and the sheer number of people involved to be at once exciting and frightening.  One thought resonated with everyone in the small group of foreigners I happened to be standing amongst: this protest isn’t going to just fade away.  Either they’re going to get what they want, or they’re going to be forcibly silenced.

In the end, it was the latter that brought the ongoing protests to an end.  The first of the government’s military responses occurred just a week after this picture was taken when thousands of police entered Oaxaca’s downtown area.  With the use of helicopters, tear gas, rubber bullets and flame throwers, the protesters were systematically driven out and their lean-to dwellings on the streets were destroyed, effectively wiping out the infrastructure of their live-in demonstration against the state government.

That particular day we still had classes, and within the walls of the institute life felt just about normal, with tea and biscuits next to our notebooks as we commenced our lesson for the day.  Our professor Luis relentlessly steered our conversation back to literature throughout our barrage of endless questions about what was going on outside.  Despite my own deep curiosity about the teachers and police, a moment came when my interest was definitively captured by our day’s reading, and it was at that moment that my fascination with Latin American literature was born.

We were reading about one of the first encounters between the Spaniards and the people of the mainland American continent.  11 ships are burning and they burn too the rebel soldiers that are hanging on the captain’s ship.  While the jaws of the sea open devouring the flames, Hernan Cortes, on foot upon the sand, grips the pommel of his sword… 700 men in Mexico, towards the mountains, the volcanoes and the mystery of Moctezuma. So went this bold tactical move by one of history’s most notorious conquistadores according to the Uruguayan writer Eduardo Galeano.  As I wrapped my mind around the words of this unfamiliar language, I witnessed fleetingly the unfolding of 500 years of history between the moment we were reading and the moment of the battle outside.  I decided then that I wanted to read more from this book we were sampling, and that I wanted to know as much as I could about the long history of the Americas, all the Americas, especially Mexico and the many countries of Central and South America.

With that intention I stepped into Allá bookstore for the first time, and bought Los nacimientos, volume 1 of the series Memoria del fuego.  From that day on I didn’t leave home without that little yellow book and my fat Spanish-English dictionary.  Knowing already that I had another trip to Mexico and a subsequent one to Ecuador ahead of me, I set about studying that book, reading passages over and over until I could understand them in Spanish without thinking about the corresponding words in English.

As it turned out, I don’t think I could have picked a better piece of literature for my purpose of studying both Latin American history and the Spanish language at once.  Galeano’s three volume set begins with dozens of pre-Colombian creation stories which culminate with the founding of the mighty Aztec kingdom and the many prophecies of the coming Spanish Conquest.  It then shifts to documented moments in history, beginning with Columbus’ 1st voyage and continuing throughout history until the final decades of the 20th century in volume 3.  Each moment is a story that stands alone as well as it fits in with the sweeping chronology of the discovery, conquest and colonization of these continents by the European nations, and the subsequent revolutions and development of the distinct countries which color modern maps of the Western hemisphere.

Each story is told as if it were happening in the present, each moment is taken from real history, and none of the stories exceed 3 pages in length.  A perfect way to take a basic understanding of Spanish vocabulary and verb tenses and shape it story-by-story into a broad perspective on Spanish language, history and literature.  The series has its critics, especially from professional historians who scoff at its brief accounts and lack of detailed footnoting.  But Galeano has crafted a work that lies somewhere between non-fiction and literature, and also provides one or two primary sources for each of his hundreds of historical cuentos.  For someone like me, a novice when it comes to Latin American history, I’ve found countless reference points from his stories which I can further explore when I choose to.  More often than not, I let these moments in history sift through my mind and am content with the fact that when I need to know more about them I can pull these books from the shelf and reacquaint myself with the story.  Then I can investigate further, either using the references Galeano provides or by simply punching some key words into a wikipedia search.

Hats off to Eduardo Galeano.  As I often find from truly good literature, a good story hooks me from the first line.  I’ve also thought that life is too short for too much fiction and daydreaming.  In a series that contains hundreds of stories drawn from the real history of the world, I get hooked by these first lines over and over again.  To leave you today, I give you my pale translation of the first lines from Volume 1, a veritable Genesis story in what could be considered a kind of Bible of American history and prehistory: 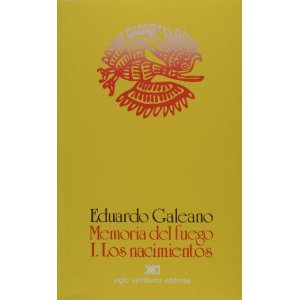 Brian Horstman is a teacher of English as well as a traveler, writer, photographer and cyclist. His interest in traveling around Latin America began while he was living in New Mexico, where he began to experience the Latino culture that lives on there. From there he spent time in Oaxaca, Mexico and has since been living in Cuenca, Ecuador and will be living in Chile starting in 2011. Cal's Travels chronicles some of his more memorable experiences from Mexico and Ecuador, as well as some side trips to other parts.
Read More Share
THREElittleSTEPS Brings Offline Actions to the Online World
It’s Snowing Yet Again