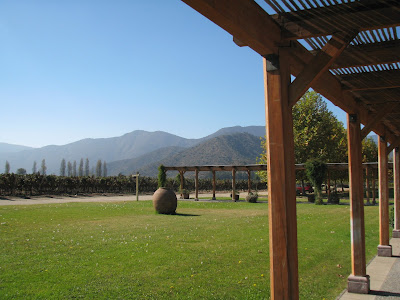 During the recent visit of my sister-in-law, we had the chance to get out of the city for a couple of days, and being late Fall at the time, it seemed like the perfect opportunity to visit one of the countless vineyards near Santiago, before all the grapes were gone from the vines. We took a train to the Cachapoal Valley, about 45 minutes south of the city. Our destination was the viña Anakena. Their wine is one of the more common ones you can find in Santiago, and over the years I’ve found myself buying it again and again for a consistently drinkable and flavorful bottle. At 3000 pesos ($6) their standard reserva is a great go-to wine for dinner or a party. 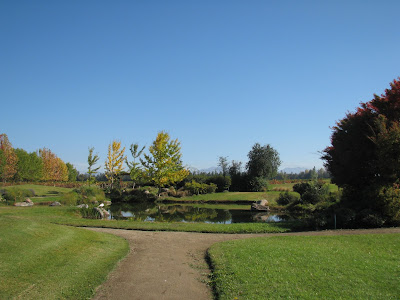 One of the almost universal qualities of visiting any vineyard is the chance to spend time in a rural setting, surrounded by wide open spaces. And since grapes thrive in a Mediterranean climate, that usually means blue skies and warm sun as well, even on a late Autumn day.

Many vineyards take advantage of this fact by setting aside some area on their property in order to enjoy the sublime setting. Anakena, for example, features a small pond with an open field next to it, in addition to an indoor space designed for events like weddings or business conferences. 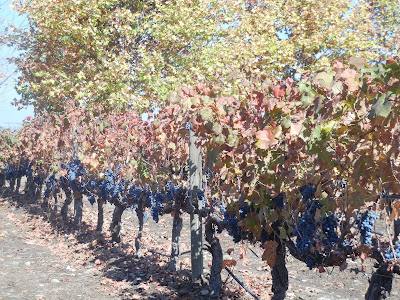 Any tour of a vineyard naturally begins with a walk among the rows of grapevines. We went in May, quite late in the autumn harvest season, but we were lucky to find quite a few grapes left on the vines, which we were invited to sample. I can’t say that I’ve tried many fresh grapes of the wine-making varieties, nor that I have anything close to an expert’s palate when it comes to appreciating the finest subtleties of grape and wine flavors. With that caveat, I’ll tell you that I was very surprised to discover that the several fresh wine grapes that we tried were, while delicious and varied, not particularly exceptional in their flavor for me, compared to other high quality table grapes I’ve sampled in the past. I don’t know what I was expecting from a wine grape compared to a table grape, but whatever I was hoping to taste, I didn’t quite get it. 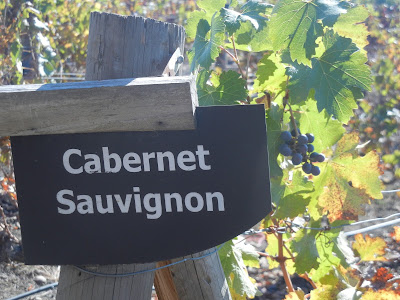 Our tour guide for the day didn’t go into great detail explaining what characteristics contribute to the selection and cultivation of the many wine grapes we enjoy today. But I imagine in addition to flavor are other qualities such as color, as well as various chemical compositions that contribute to good fermentation, and what have you.

We were taken along several rows of grapevines, each helpfully labeled to identify that particular grape we would be trying. 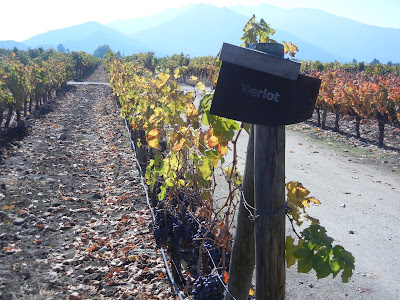 While I don’t specifically recall the contrasts in taste, texture, color or juiciness of each grape that I tasted that day, I can say that I was impressed by the great range in flavors from one variety to the next. While some were exceptionally sweet, others were very acidic and even bitter. We were told that classic French reds such as the Cabernet Sauvignon and Merlot,as well as the now distinctively Chilean Carmenere, did particularly well in the climate of the Cachapoal valley.

Endless rows of grapevines framed by woods and graced with the water runoff from the mountains of the Cordillera de los Andes on the horizon. A truly beautiful place to learn a thing or two about winemaking. 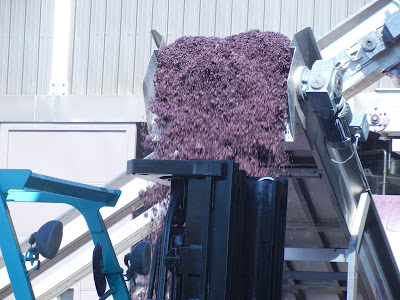 The second part of the tour took us to the commercial facilities of the vineyard. Here we saw a modern operation including the mechanized mashing of grapes. 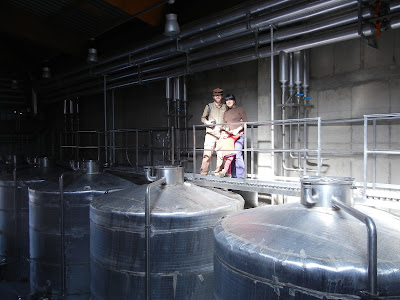 We also had the chance to see these huge vats used for the fermentation of the grape juice, as well as an automated bottling facility, which was not in operation at the time. Our guide told us that the vineyard even leases their bottling operation to other vineyards lacking their own such machinery. 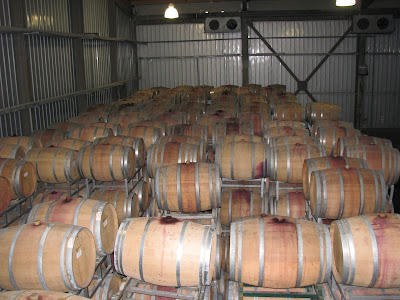 The last leg of the tour of the facilities took us to the barrel room, where you can see the wine reposing in oaken casks, full up to their purple-stained bungholes (that’s what they’re called).

Here is where the wine mellows with age, and also begins to take on some of those deeper flavors imparted from contact with the oak itself.

The climax of the tour came with the tasting of some of the wine we’d been tantalized with throughout the afternoon. While far from a connoisseur of wine, I benefited greatly from a quick lesson on getting the most out of a glass of wine. From analyzing the color to noting the aroma in a gradual way before taking the first sip, we were shown a short list of simple techniques to aid in the appreciation of any wine that fills your glass.

We sampled three wines before being let loose in the obligatory gift shop where the tasting took place. We were also offered some very low prices on a few of Anakena’s premium bottles, which we couldn’t pass up.

All in all, a fine foray into the world of winemaking. 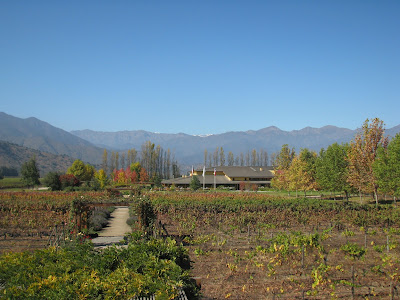 Brian Horstman is a teacher of English as well as a traveler, writer, photographer and cyclist. His interest in traveling around Latin America began while he was living in New Mexico, where he began to experience the Latino culture that lives on there. From there he spent time in Oaxaca, Mexico and has since been living in Cuenca, Ecuador and will be living in Chile starting in 2011. Cal's Travels chronicles some of his more memorable experiences from Mexico and Ecuador, as well as some side trips to other parts.
Read More Share
10 Sexual & Oh So Dirty Names of American Cities Towns & Cities
Wallonia’s Food Scene in Belgium, A Foodie’s Orgasm