We recently took a trip that included several towns in the South of Chile, doing our best to see as much as we could in the amount of time we had for traveling.  It was something of an exploratory trip, as we had never been to any of these places before.  Chile is a uniquely shaped country, and its extended length means that thorough travel throughout its many regions requires a lot of time, and some careful planning.  Adding to the challenge is that Chile, like many of the countries in this part of the continent, isn’t cheap, especially in the high Summer season of December through February.

Especially in the South, the high season lends itself to tourism because you’ve got the least chance of getting rained on.  The names of Chile’s southern regions, such as Los Ríos and Los Lagos, highlight the abundance of water and its defining presence in the area.  Our first stop was Valdivia, the capital of the region of Los Ríos.  It has an extensive history of various waves of European colonization and indigenous resistance, but the biggest earthquake in the recorded history of the world, at a magnitude of 9.5, was responsible for the destruction of most of its historic buildings and economy.  That means that today Valdivia itself isn’t much to look at compared to many of the other cities in the area.  But it’s blessed with some gorgeous geography: three beautiful rivers, like the one you see above, as well as a varied coastline made up of multiple islands, and plenty to do.

We arrived in Valdivia at night, having taken the train from Santiago as far south as it goes and then busing it the rest of the way from Chillán.  Despite making a reservation at a hotel and confirming it the night before, the receptionist told us they had no rooms for us.  Some mild indignation landed us in a private cabin at a discount for our first night until they made room for us in the hotel.

The masses of travelers that flood into Chile’s southern destinations demand plenty of forward thinking, like the booking of hotels and buses several days in advance.  And even then, you should be prepared to behave assertively when necessary.  You’re in direct competition for space, and even the national parks and monuments have no qualms about visibly raising the prices this time of year.

One of our cost control methods was, whenever possible, to stay at accommodations with kitchen access, either in a modest apartment or carefully negotiated private cabin, or in a hostel where the kitchen is shared with the other guests.  That said, we still made a point to sample some of the signature dishes in the South, where dark beer and buttery potatoes are served as accompaniments to seafood and lamb that crumbles and melts upon contact with your watering mouth. 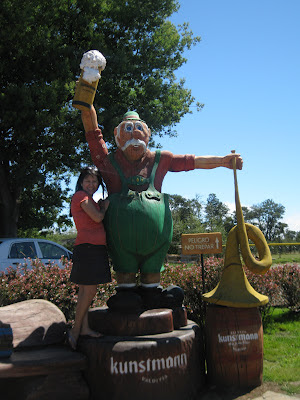 Like at the Kunstmann brewery, the home to Chile’s famed German-style microbrew.  Chile is in the midst of a craft beer revolution, putting Kunstmann on the map today in the eyes of enthusiasts.  Their restaurant is something of a mix between Cracker Barrel and brewery, walls lined with memorabilia painting a clear picture of the historical German influence on the region.  The theme is rounded out by the impeccable stainless steel fermenters on display behind glass, and the countless T-shirts, commemorative steins and gift boxes of beer for sale.  Skipping the gift shop, we contented ourselves with a few pictures, a huge meal, and a pitcher of unfiltered lager.

The guidebook I relied on for this trip had a definite love-it-or-hate-it attitude about the South of Chile, placing each destination squarely in either the can’t-miss or not-on-your-life category.  It sang the praises of Kunstmann beer, for example, while condemning the food as so German that only the nostalgic Hansel or Helmut among you would find it appealing.  I thought it was pretty damned tasty, though, and a few friends who have also been there have echoed my impression as well.  Can’t please everyone, I guess. 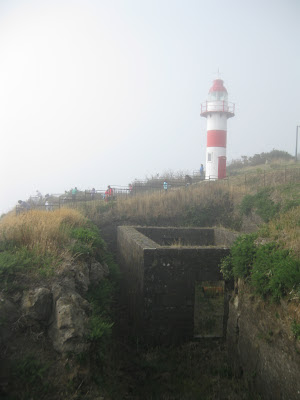 The coastal areas of southern Chile, during much of the colonial age, lay at the edge of Spanish territory and the settlements consisted mostly of heavy fortifications which have weathered the centuries and earthquakes better than the buildings in the city of Valdivia.  Except for the cold and fog, some of these forts reminded me of the ones we saw in Cartagena de Indias.

This one was in a place called Niebla, aptly named for the prevailing weather conditions.  While the visibility was low and confounded our attempts at taking pictures, it was fascinating for us to be at the other extreme of Spanish influence in South America.  From the Caribbean forts in Colombia to these in South Pacific, one was struck as much by the similar architecture as by sheer distance between them.

The three forts we visited formed a triangle of defense with each point located on a different island or peninsula, separated by the estuary of the Valdivia River.  When you look at the system of forts on a map after seeing them for yourself from the water below, it becomes clear how formidable the fortifications would have been for pirates or other attackers. 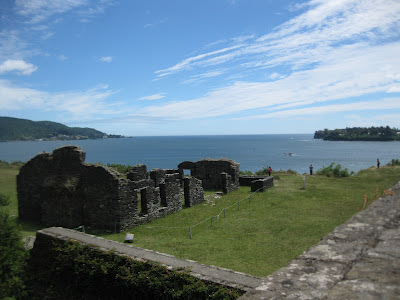 Today, however, they stand as little more than a crumbling relic of the past, punctuating a profoundly beautiful landscape where the continent meets the sea.  This fort is located on the Isla Mancera, a picturesque island with a walking trail along its perimeter, ostensibly open to the real estate market as evidenced by the collection of rustic houses to be found on the path, but fortunately lacking any large scale development so far.  When you find yourself at the right vantage point here and look out over the sea, you can’t help but hope that places like this will somehow manage to avoid the greedy eyes of developers forever. 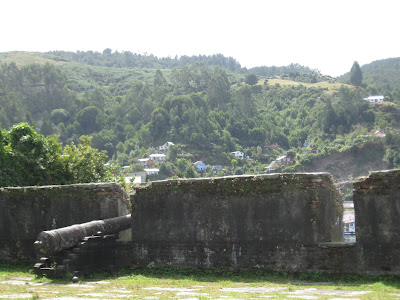 The last, and the largest, of the forts we visited was in the small town of Corral, with a population larger and more concentrated than the haphazardly scattered homes on Isla Mancera.  Hopping from one destination to the next on a small ferryboat as we did that day, you begin to get the feeling that you could keep at it endlessly, exploring one town after another in infinite procession.

That’s why I sometimes prefer to look at a map after the fact, or perhaps never, so as not to put limits and borders on that feeling of unlimited expanse.  But even then, when your eyes are filled with wooded hills and blue water as far as you can see, that’s about as close to the infinite as you can hope to fathom.  Especially when you’re on the first leg of a trip full of places you’ve never been. 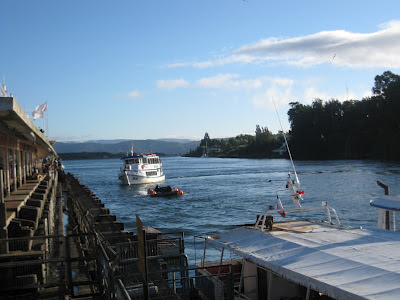 Back in Valdivia, we walked the costanera, a boardwalk at the edge of town that comes to a point at the confluence of the two rivers that defined the historic borders of the city.  There, a colony of stocky sea lions have made themselves at home, a few of them seen basking on a raft, in front of the tour boat in the river.

These boats will provide you with an all day river cruise, stopping off at the same forts we visited.  We opted to make the same trip on our own terms, taking a city bus to Niebla and then hiring our own ferry from one stop to the next, but for those who prefer the convenience and comfort of a packaged trip, there are kiosks of tour agencies on the boardwalk ready to make you a deal. 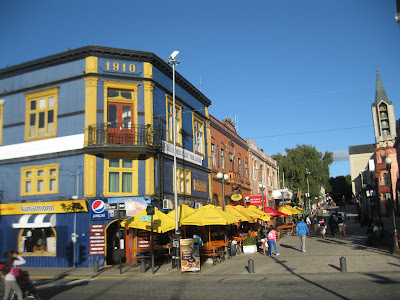 And, while I mentioned before that Valdivia didn’t have much historic architecture left after the 1960 earthquake, that’s not to say it doesn’t boast a few remnants of its former glory.  What has remained has been polished up and painted, rendering certain corners a miniature Valparaíso of sorts.

It was in one of these buildings where we had our second taste of southern cuisine on our way out of town.  With our backpacks piled up in the corner, we hunkered down to a full-on seafood feast of fried fish and a hearty stew loaded with all kinds of shellfish I don’t know the name for in English or in Spanish.  Accompanied, of course, with deliciously buttered potatoes.  And washed down, naturally, with a nice, dark beer.  It was going to be another long bus ride, and we’d need our spirits high.

A fitting end to our first stop.  Stay tuned for another fun-filled installment. 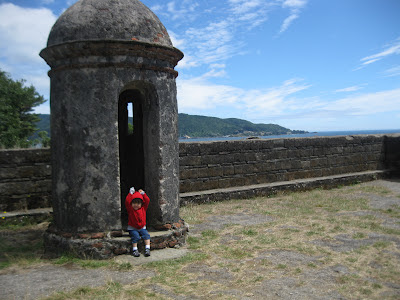 Brian Horstman is a teacher of English as well as a traveler, writer, photographer and cyclist. His interest in traveling around Latin America began while he was living in New Mexico, where he began to experience the Latino culture that lives on there. From there he spent time in Oaxaca, Mexico and has since been living in Cuenca, Ecuador and will be living in Chile starting in 2011. Cal's Travels chronicles some of his more memorable experiences from Mexico and Ecuador, as well as some side trips to other parts.
Read More Share
On MEOW & ROCKRGRL’s Carla De Santis Black
Orion’s Belt in Western Washington Skies