One of the things I remember most fondly about growing up in a small town in Ohio was going to a neighborhood fruit stand.  In the same part of town where I went to school, and where my dad had a car lot that he ran after work, was a shop run by a man named Tony Catanzaro.  I don’t remember what he looked like or what kind of a person he might have been.  But I do remember the sights and smells of being in a store like that, especially in the summer when the ripest fruit was on the market.  I remember the signs with the removable numbers for the ever-changing prices, the fresh samples, and the hanging scale at the cash register that the lady behind the counter would obligingly allow me to pull down and watch the numbers spin around on the wheel.
But mostly, of course, I remember the fruit.  The bright colors, the mixture of aromas, and best of all, the taste of it all during the ride home afterwords.  The watermelons were maybe the most intriguing for me at the time, as I would watch my dad go about deciding which was going to be the ripest and juiciest.  Maybe I’m remembering wrong, but I recall a time when the knife went into the melon and it actually split open on its own, ripe as it was.  Then a huge slice would go on a plate and I would dig into it, spitting seeds and slurping up the red interior with true childlike abandon.
Catanzaro’s market is gone now, and today it seems rare to find a place like it.  Except in the summer, when you can still find plenty of roadside stands selling fresh sweet corn, peaches, chili peppers and other summertime specialties.  The rest of the year, most people resign themselves to the supermarket produce section.  Bountiful as it may be, and carefully designed to appeal to the modern consumer, such a place lacks a certain quality that a simple corner store has without trying.
In the US there is also a modern day resurgence of farmer’s markets, and many local governments are smart about supporting them in various ways.  But in many communities, for now at least, the old-fashioned fruit and vegetable shop seems unable to compete with big grocery chains.  But maybe I’m biased, having had the good fortune to get a taste at a young age of such a fine local business, albeit on its way out.
All of that probably has a lot to do with how much I enjoy a simple trip to buy food for the week, in a place like Ecuador’s Cuenca: 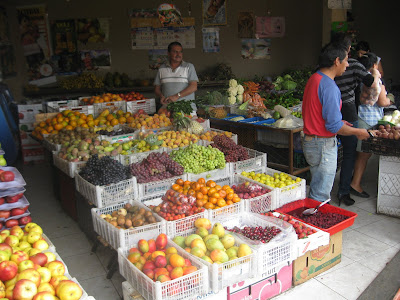 Cuenca certainly has supermarkets that look and feel much like any in the US, but it also has lots of neighborhood stores like this one.  In fact, in towns of any size, and in every country I’ve been to so far in Latin America, you’ll find a no-frills store every few blocks in most neighborhoods.  Boxes full of fruit, boxes full of veggies.  A scale, and one or two people helping customers and otherwise shucking peas or corn.  It doesn’t get much simpler than that.  In Ecuador at least, you’ve got to know your product, as the prices usually aren’t posted and a fair amount of bargaining is expected.  While we were living in Cuenca, we used to feel like we spent a lot if we paid $14 for all of our fresh ingredients for the week.
In our family, the overwhelming majority of our meals are prepared and eaten at home.  Like in most households, I’d imagine, our tastes often change over the course of the months.  But during our last days in Cuenca, we were making lots of pizza with fresh sauce, and fresh dough: 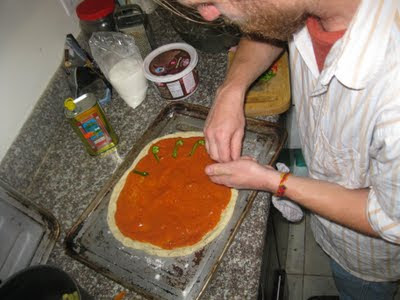 And once you start making fresh dough for pizza, it seems only natural to start to wonder what else you can make with flour and yeast. 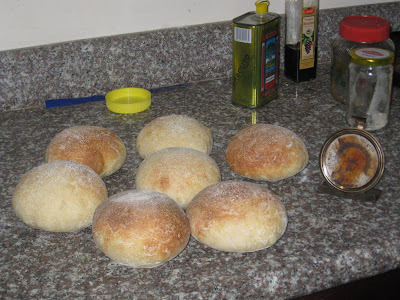 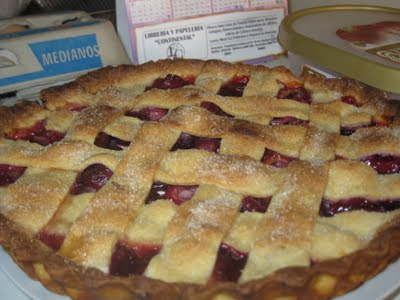 While I tend to focus on baking with salty and savory flavors, Nancy has a talent for turning out desserts.  Mmm, cherry pie, with fresh cherries!
Another one of her talents is to turn virtually any tropical fruit into delicious fresh juice, which is as enjoyable for adults as it is for kids. 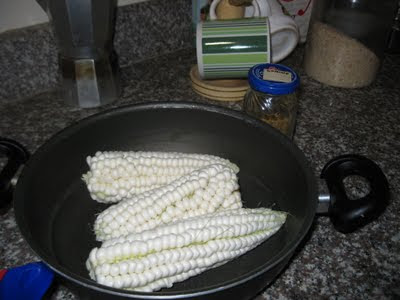 Another Ecuadorian delight is corn, from which you can make all kinds of dishes.  Like tamales, humitas, quimbolitos, chibiles, motepillo, and many others.  Or you can just have the Ecuadorian version of corn on the cob, with big white kernels that might not be as sweet as US sweet corn. But they’re still tasty, and they make a satisfying popping sound when you bite into them.

We ate a lot of corn at our house, but when you looked out the window, it was easy to see why: 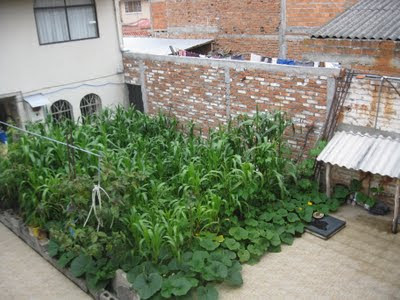 Also featured in this photo is the vine of the gigantic and delicious camote squash, also known as zapallo.  It could be considered the big, green South American cousin of the pumpkin.  In between the corn grew bean plants.
Corn, beans and squash are colloquially referred to as the three sisters and can be found growing in traditional farms and gardens throughout the Americas.  They sustain each other in a perfect three-way relationship: the corn stalks provide structure for the delicate vines of the beans, and shade for the squash.
The beans fix nitrogen from the air into the soil, for use by the corn and squash.  And the ample leaves of the squash muscle out weeds which would otherwise compete for space in the garden in general.  It’s hard to imagine packing more growth into that little garden plot!  But in my layman’s opinion, there is no environment better on earth for a plant to grow than the mountains of Ecuador.  The eternal Springtime, and the perfect balance of sun and rain makes for ideal and uninterrupted growing conditions all year, and the fact that these conditions have existed for centuries means that the topsoil is thick and loamy.
From farm to table.  And a market in between.  That’s the way it should be when it comes to putting food on your plate, if you ask me.

Brian Horstman is a teacher of English as well as a traveler, writer, photographer and cyclist. His interest in traveling around Latin America began while he was living in New Mexico, where he began to experience the Latino culture that lives on there. From there he spent time in Oaxaca, Mexico and has since been living in Cuenca, Ecuador and will be living in Chile starting in 2011. Cal's Travels chronicles some of his more memorable experiences from Mexico and Ecuador, as well as some side trips to other parts.
Read More Share
Walk Like An Egyptian May 7-8
Struggle with Gadgets and Devices?