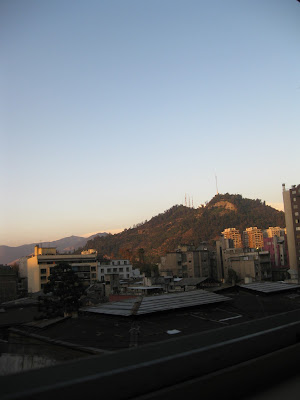 Since we arrived in Chile, we’ve been living in Santiago, its big, modern capital city.  In many ways, it’s even more modern than many comparably-sized cities in the US, when you take into account the kinds of apartment and office buildings that are going up in Las Condes, or the constantly expanding subway system, for example.

Living in a city like Santiago has been a great experience so far, revealing yet another angle in the multifaceted gem that is Latin America.  I’ve remarked before, surely, on the simultaneous unity and diversity of Latin America.  With a common language, history, and certain aspects of both traditional and popular culture, you can visit many places around the region and find common threads.  And yet the culture is so varied that you can go from one country to the next and discover the countless details that make each place unique.

Santiago, for its part, represents Latin America perhaps at its most modern, its most globalized.  Here, you haven’t lost the charm inherent in any given latin culture, but you also find yourself surrounded by all sorts of conveniences, and big business.  Fascinating, and overwhelming at the same time.  A topic I will certainly explore further in later musings.  It will have to come later, for today’s story starts here in the capital, but ends up elsewhere.

After a month or so of staying in Santiago, once work was lined up and a regular schedule began looming ahead, we thought we ought to get out of town for awhile.  As pleasant as it’s been to be in a modern city, both of us come from smaller towns and after awhile, a city this size can start to feel oppressive.  Fortunately, once you leave town you go from urban to rural landscapes very quickly, and there are a number of interesting destinations within an hour or two from the city limits by bus. 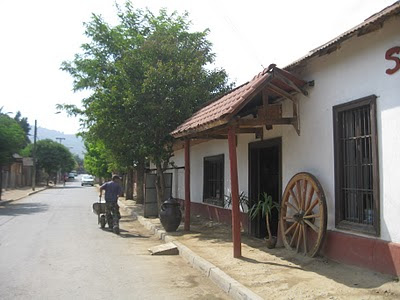 One such place is Pomaire.  It has a very small town feel, with no buildings seemingly more than two stories, and most homes with a small but fertile garden.  Many of the houses look to be made with adobe, and either have flat roofs, or sloped and topped off with corrugated metal.  Or better yet, with the red ceramic shingles you can find all around Europe and Latin America.

Further contributing to the small town atmosphere is the fact that the people are much more likely to say hello to you as you pass by in the street, and on the day we went, there was hardly a car to be seen on the roads. 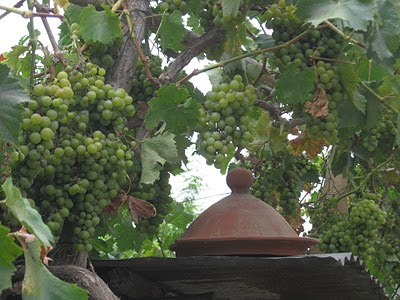 There aren’t many destinations in central Chile lacking the ubiquitous grapevine, whether it is laid out in countless rows in a commercial vineyard, or spreading along a trellis in someone’s backyard.  Nearly all the homes in Pomaire seemed to be graced with vines of this latter ilk, and since we found ourselves there in the late summer of mid-February, the grapes were getting plump and ripe, and looking mighty tasty.

Grapevines of this sort add an elegance to even the simplest home.  Really, if you’re going to grow a garden, why not make it an edible one? 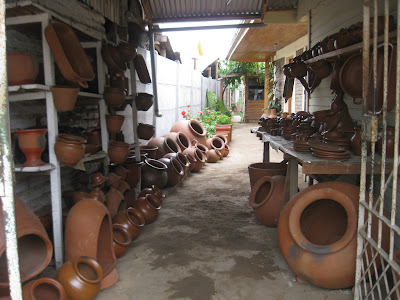 Before going any further, I should mention the main draw of Pomaire, which is its pottery.  Here, you can buy simple, functional and beautiful clay pots for use in the garden or kitchen, plus all kinds of utensils.  Oven-proof and purportedly even stove top-proof, we’ve been baking pizzas and casseroles in the ones we bought for the past several months.  We haven’t risked filling one with soup and throwing it on the stove yet, but every vendor we asked boasted that it could be done. 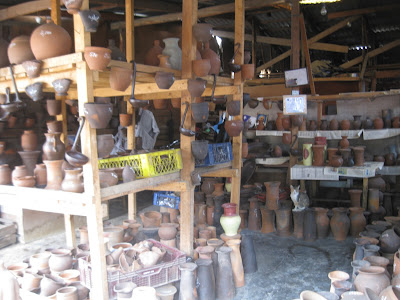 While some of the shops had attractively designed showrooms, the majority were like this one, little more than an open warehouse.  Walking around a store like this, you had to assume that in the next room over the next round of pottery was being molded and fired by members of the same family who was sitting casually in the storeroom with you.

Pomaire is so close to Santiago that it’s a popular weekend destination, a place to shop in some rustic stores and get out of the city, much as we had chosen to do.  So much so that its unmistakable style of pottery can be found in Santiago homes, up and down the socioeconomic ladder. 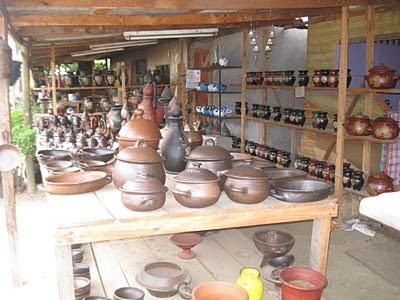 When you consider the sheer size of our new big city home and the popularity of Pomaire’s products, you have to imagine that this town has potentially churned out millions of earthenware goods over the years.  There are dozens of vendors around town, and ostensibly just as many potters turning out the clay merchandise before throwing it in the kiln.  Each of them most likely has their own personal touch or specific technique that makes certain products better than others or unique to the eye of the trained beholder.  But from my layman’s perspective, what we saw from store to store conformed to a signature style that is less individual overall, and more demonstrative of a sort of “Pomaire brand.” 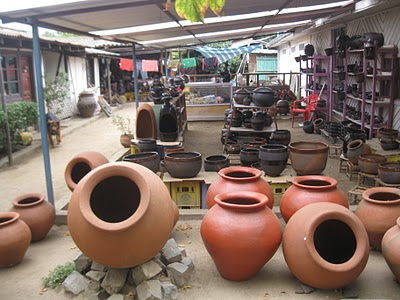 If my casual assumption is to be believed, we could go on to observe that the collective selling power of Pomaire’s goods must be a well-recognized economic engine within the community, and the local potters may well have collaborated in designing such a recognizable style and functional quality.  This would help to guarantee that Santiaguinos keep coming back for more, and rather than one family cornering the market, the entire community benefits from the constant influx of visitors.  In other words, grassroots branding.  Who needs a corporate logo when you define your product with your own bare hands? 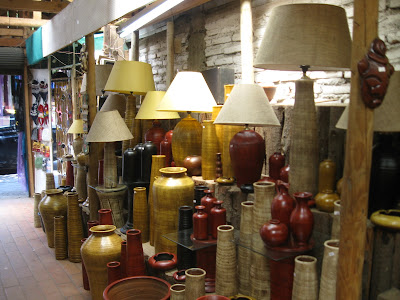 Best of all, it’s cheap.  We bought an armload of various clay pots and what have you, plus one of the lamps from the shop here, and a liter of local honey.  Each item ranged from only $3-$10 more or less.  But this also meant that as we made our rounds through the town we ended up spending a decent chunk of money before we were done.  We didn’t mind; we were in the market for something to bake a pizza in, and a reading lamp.  Everything else was more of an impulse, truth be told.  But we haven’t had any buyer’s remorse so far.

The other attraction of Pomaire is the rustic food, baked in rustic clay ovens, and served up in equally rustic-looking restaurants. 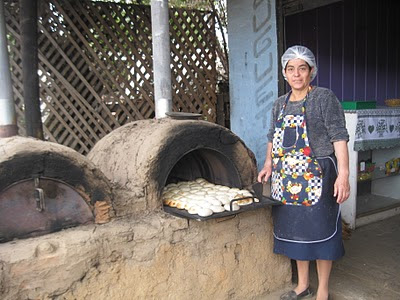 We got there too early for lunch, which meant that the bread was just going into the hearth, and the stores were just starting to open.  The lady shown here was in the middle of turning her pan amasado around for an even bake just as we walked by, and was nice enough to pose with her modest yet enviable oven for us.

Unfortunately, the bread still had some more cooking to do before it would be ready, and we never got back around her way to try it.  Pomaire is also famous for its over-sized empanadas, which can be described roughly as a meat pie.  Imagine a potpie, but wrapped up like a calzone, and you’ve got the basic idea.

I’ve developed an unbridled appetite for the empanadas they sell in our neighborhood, which are big enough to fit nicely in your hand.  The empanadas here were about twice that size.  Or at least, that’s what we saw as we walked by the restaurants. 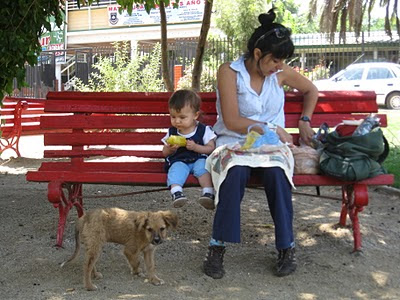 We didn’t know there were going to be empanadas in Pomaire until we got there, so we had packed our own lunch before we left home, and contented ourselves with a picnic lunch in the park.  We didn’t feel like we were missing out; it’s an easy and pleasant trip out of the city, and we’ll be making it again.  The next time, we’ll try the food.  For the time being, we had some nice sandwiches and corn on the cob, and shared our mealtime with a pack of hungry puppies who wouldn’t leave us alone.  Hence lunch on a bench instead of in the grass, safely out of their limited reach.

Otherwise, we were in Pomaire for the day, so we had time to wander the streets for awhile. 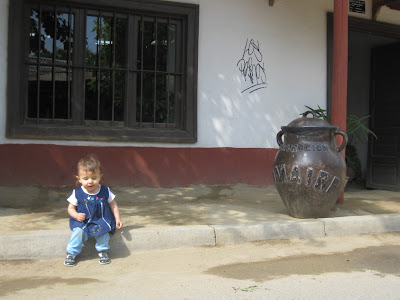 We’ve been told that Pomaire fills up on weekends, especially on holiday weekends when everyone is looking to get out of Santiago.  But the day we went was a sleepy weekday in the summer, so we got to enjoy the town during one of its quieter moments.  There were a few tourists wandering around besides us, especially after lunch when the weather warmed up, but as close as we were to the big city, I can imagine how different it could be on other days.

Shopping and eating is what tourists do in a place like this, but for us, having been confined in the big city for more than a month straight, it was nice to simply waste some time in a small town.  That kept us entertained for at least an hour or so.

But eventually we made up our minds to call it a day.  We had scoped out the things we wanted to buy in the morning, and then systematically bought them up on the way out of town.  Once thoroughly loaded down with our weighty earthenware purchases, we found one of Chile’s peculiar colectivos, a taxi with a fixed route and a fixed price per destination.  It took us to a dusty bus stop, where a bus quickly came along and whisked us along the highway back to Santiago, through some extensive stretches of agricultural land. 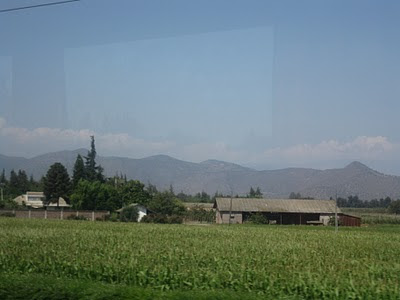 If you grew up in Ohio like I did, and if it weren’t for the picturesque mountains in the background, you might be fooled into thinking that you weren’t in South America at all when you look at a picture like this.  But that cornfield and barn are as Chilean as wine grapes, and a visit to the vegetable market in summer here will present you with plenty of sweet corn that’s *almost* as good as what you can get where I come from.

While I’m on the topic, I’ll also mention that on the four different roads that I’ve taken out of Santiago so far, each has a revealed a vastly different landscape.  The one to Baños Morales took us up a mountain pass that got drier and more deserted the further we went.  This one led through the cornfields you see here, and other crops you could find throughout the Midwest.  The road to Valparaíso runs past vineyards spread out amongst gently rolling hills.  Another, which I’ll write about eventually, went along rows upon rows of the fruit trees that comprise central Chile’s many orchards.  Maybe I saw the trees that will bear the apples you’ll be eating next summer?

We’ve been talking about going back to Pomaire again soon, now that it’s Spring.  We’re all out of the delicious honey we bought, and there’s a few more things we could use for the kitchen.  We won’t see the grapes this time of year, but I imagine there will still be some giant empanadas. We’ll be sure to stay for lunch. 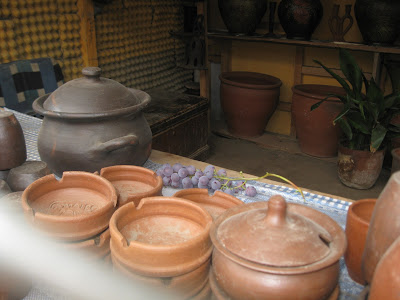 Brian Horstman is a teacher of English as well as a traveler, writer, photographer and cyclist. His interest in traveling around Latin America began while he was living in New Mexico, where he began to experience the Latino culture that lives on there. From there he spent time in Oaxaca, Mexico and has since been living in Cuenca, Ecuador and will be living in Chile starting in 2011. Cal's Travels chronicles some of his more memorable experiences from Mexico and Ecuador, as well as some side trips to other parts.
Read More Share
Aneesh Chopra: Blue Buttoning Our Own Data Will Fuel Innovation & Empower Americans
Mongolian Cloudscapes: Skies Like No Other