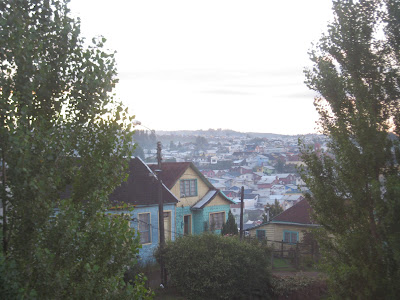 Chiloé.  Like many places in Latin America, its name alone evokes a certain mystical impression.  The fact that it is routinely shrouded in mist and fog only helps maintain such a feeling once you’re there. A large island in the north of Chilean Patagonia, it’s far enough from the beaten path to have access only by sea-going ferry.  Ironically, the Pan-American Highway runs through it, and in fact ends at the southern point of the island.  But the “highway,” as it also does in Panama, runs to the sea and then picks up again on the other side.  I’ll take you on a virtual walk-through of the crossing. 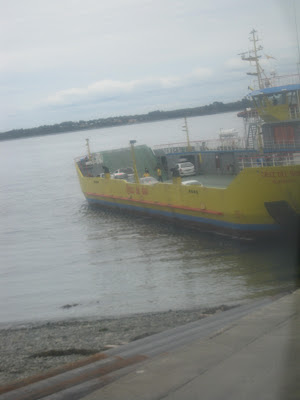 First, a look at our trusty sea-going vessel.

These ferries are big enough to carry cars, trucks, buses, and anything else that rolls along a highway.  I had never been on a ferry as big as one of these, so for me it was every bit as interesting as anything else we saw in Chiloé.

In the US, I suppose we’ve gotten around to building bridges of various sizes across just about every body of water we might feel like driving across.  I remember driving in Maryland and noticing on the map a “Bridge-Tunnel” across the Chesapeake Bay and heading to Virginia Beach.

I couldn’t imagine what a bridge-tunnel would look like, so I decided to drive down the Delmarva Peninsula with the sole intent of seeing it firsthand.  It cost $12 to use it, as it turned out, which was more than I expected, but I certainly wasn’t going to head back the way I’d come.  But, I digress. 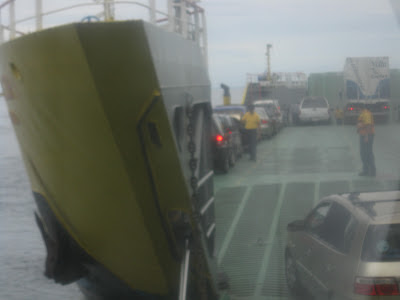 Boarding the ferry.  It was interesting to observe that it was operated by Cruz del Sur, the same company that operated the bus we were on.  Quite a lucrative business, I imagine, being the means of transport for anyone hoping to come to or go from an island with a population of 150,000.  The cars were clearly being packed in pretty snugly.  Considering the trip across the channel was a good twenty minutes each way, it pays to be efficient with space.  I was impressed too by how quickly the whole process moved along. 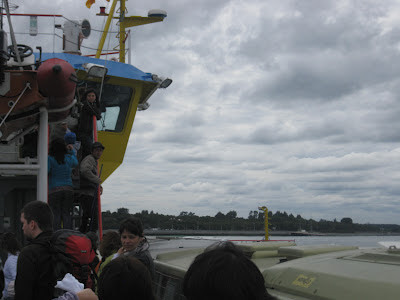 Once the ferry got moving, our bus opened its doors and virtually everyone got out.  Apparently, we weren’t the only ones impressed by the experience.  A quick trip up a flight of stairs and it was possible to join the many other people enjoying our seafaring experience.  The channel is only about 3 kilometers wide, but still, we were in the waters of the South Pacific.

For many years, there has been talk of building a bridge across this channel, which would do away with the need for ferries like this one, and permanently connect the people of Chiloé (known as chilotes) with the mainland.

There are those in favor of such a project for the benefits it would bring to the island, and those who oppose it, citing a deterioration in the unique character that the island has developed after centuries of relative isolation. 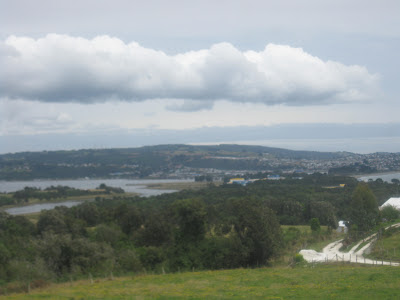 Once across, we continued by land for a few more hours before reaching our destination of Castro, the capital of Chiloé.  It was said to be a sort of encapsulated experience of what the island’s many towns had to offer in terms of culture, geography and architecture.  Along the way, we were afforded our first views of the island’s landscape.

Much of what we had heard and imagined about the countryside here proved to be quite true.  Green hills, dirt roads, small towns and the constant reminder of the sea, either through its many estuaries or the regular rainfall blowing in from the Pacific. 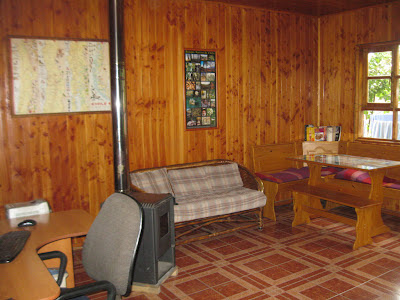 When we got to Castro it was late afternoon.  Our bus left us at a terminal downtown, a good ten blocks from the hostel we’d found after hours of phone calls from Puerto Varas.  Not only was it the high season here in the South of Chile, but by pure luck we’d planned our trip to coincide with what are known as the fiestas costumbristas of Castro.

This is a party held annually to celebrate the local culture with lots of music, food, drink and handicrafts.  That meant we’d have the fortune to see it even though we hadn’t planned on it, but it also meant that the town’s limited lodging was filling up fast, and we were lucky to find a place to stay, even calling a couple of days in advance.  And not a bad place, either. 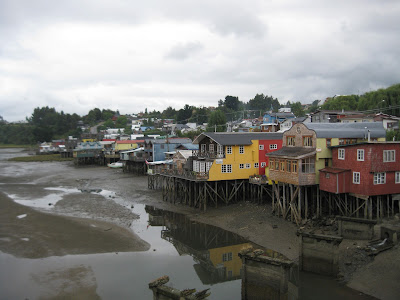 After meeting the owner of the hostel and getting set up in our room, we decided to make the most of the afternoon and see the town.  I was particularly interested in seeing (and saying) palafitos.  A nice word which describes these stilt houses jutting improbably out into waterways like the one you see here.

Obviously at the moment the level of the water was rather low, but judging from the height of the stilts, it sometimes gets quite a bit higher.  But thanks to the stilts, no wet floorboards.

From the front, these look like regular houses along a street like any other.  It’s not until you manage to get around behind them that you see what makes them so special.

Considering what’s behind them is usually water, it can be tricky to find a decent vantage point to see them.  Fortunately, there was a bridge over this particular river, affording us this postcard glimpse. 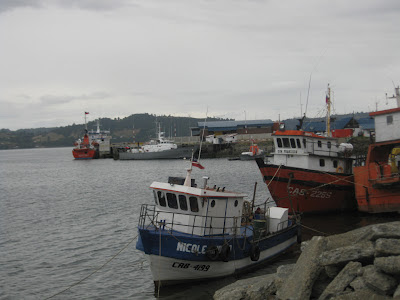 From there we made our way down to harbor, where we saw fishing boats, military boats, commercial shipping vessels, and even a cruise ship carrying lots of English-speaking retirees, who were walking around the neighborhood snapping pictures along with us.  As we continued our sightseeing, a gentle rain began to fall.

As the afternoon wore on into evening, this rain picked up until it became a steady downpour which continued in varying degrees of intensity for the rest of our time in Castro.  We were told it rained a lot here, and once again, the rumors turned out to be true! 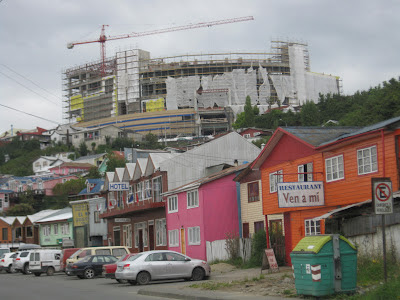 This didn’t stop us from having fun that afternoon, as the rain was still, at this point, a light sprinkle.  We were thoroughly enjoying the coast, the unique houses, and the town of Castro itself.

Everything about it was pretty much just what a tourist would hope to come so far to see.  Hence our surprise to see the hulking building looming atop the hillside, at such stark contrast with its surroundings.  Still under construction, it conjured up comparisons of Death Star-like proportions. 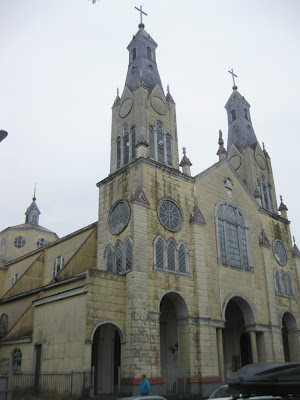 Situated only a few blocks from the town square and Castro’s iconic wooden church, we ventured to guess it was a shopping center, and once back in Santiago weeks later, we learned we were right.  Photos much like the one we took here appeared all over the newspapers, with headlines and articles exploring the controversy.

For tourists, and for those locals who count on tourism for their livelihoods, it was a bane on their impression of Castro’s quaint small-town atmosphere.

For many others in Castro, who currently travel three hours and across the ferry to Puerto Montt for anything from a movie theater to a fully equipped hospital, the mall would bring a welcome dose of modernity.  Probably no modern medical clinic, but a movie theater?  Maybe.

The project was under scrutiny not only for its inconsistency with the rest of the town’s architecture, but also because it had allegedly been built with a few more floors than what was originally authorized.

The project’s financier and designers, for their part, claimed that the municipality was changing its tune halfway through the process now that it was provoking such a high-profile reaction around the country.

Leaving the project, for now, in limbo.  Whether or not this and the bridge across Chiloé’s northern channel get built anytime soon, though, it’s clear that the pressure to bring the community here into fuller integration with the rest of Chile is strong.

Much of our time, due to inclement weather, was spent indoors at our hostel.  With a large group of guests and a nice communal area including a fully functional kitchen, it was easy to pass the time like this.  And as usual, Tamia found a friend her size.

We also spent time playing cards, drinking wine and researching the next legs of our trip, working out how many days we’d spend in each place and how to plan our bus trips and accommodations accordingly.  As I’ve said in past postings, this was the high season, and it was essential to look a few days ahead in order to not get stuck in an unfamiliar place with nowhere to stay.  In Castro especially, we saw many backpackers going door to door in the rain, looking for somewhere to sleep for the night.

That’s bad enough when you’re in your twenties and on your own, but traveling with a small child makes that an especially unconscionable idea.  But thanks to Skype and wifi service at even the most rustic hostels, it was easy to stay a step ahead. 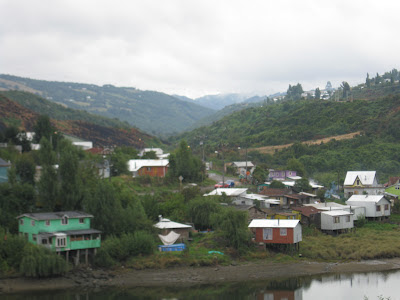 Doing my best to make the most of our time, I donned a rain jacket and tried to take advantage of some of the less rainy moments.

During such times I explored some of the more rural areas surrounding the town of Castro itself.  Maybe because it was cool, green and wet here, and maybe because of the humbler way of life, it reminded me a lot of being in the Sierra of Ecuador.

At one point I also got on a fogged up, run down city bus and went for many kilometers along a slick road out of town and to the famed fiestas costumbristas.  One of the soggiest events I’ve been to in a long time, it was a bit short on attendees that day thanks to all the rain.

As you can see from the photo, many of them appeared to be on their way out as I was heading in.  Undeterred, I vowed to stay under the cover of the many wooden stands while sampling as much food and warm beverage as I could during the next couple of hours.  My favorite was the chochoca, a thick sheet of savory potato dough roasted over a grill and then served with fried pork folded into it.  This I washed down with a nice, warm glass of wine heated with orange slices.  Tasty!

Brian Horstman is a teacher of English as well as a traveler, writer, photographer and cyclist. His interest in traveling around Latin America began while he was living in New Mexico, where he began to experience the Latino culture that lives on there. From there he spent time in Oaxaca, Mexico and has since been living in Cuenca, Ecuador and will be living in Chile starting in 2011. Cal's Travels chronicles some of his more memorable experiences from Mexico and Ecuador, as well as some side trips to other parts.
Read More Share
Cool New Spotify Concert Discovery App from SeatGeek
Top Things Happening in London’s Parks this Summer