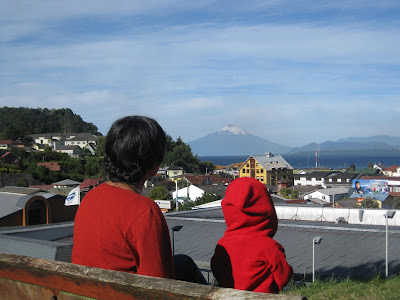 Picturesque Puerto Varas.  A sort of quintessential town in the south of Chile, it embodies much of what people expect when they think of this part of the country.  A small community with wooden houses, lots of trees, a frigid but beautiful alpine lake, and of course, a majestic, snow-capped volcano looming on the not-so-distant horizon.  There are many towns like Puerto Varas in southern Chile, but few manage to lure as many tourists.  Perhaps because this one has reached a critical mass of tourism, which brings in enough consistent revenue to pay for more infrastructure for tourists, who come in greater numbers and bring more money.  So it has gone over the years, leading Puerto Varas to become something like a Vail, Colorado of South America. 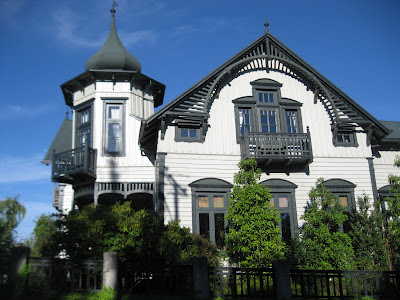 While many people come to ski in the winter, just as many make their way here in the summer for hiking and other outdoor activities.  But many families, like us, come simply to enjoy the town itself.  With a wave of German immigration in the 1800’s, the town has been left with a decidedly Teutonic cultural stamp, most visibly in the form of its many historic buildings.

Incidentally, the thousands of German settlers in the area have had an important effect on Chilean culture up and down the length of the country.  From the ubiquitous schop (draft beer) to be found in any given bar in any town or city in Chile, through the tasty chucrut (sauerkraut) they put on their hot dogs, all the way to the kuchen (cakes) served for dessert, one of the best ways to experience German influence here is with your belly.  Another significant result of all of this is the Chilean ability to actually spell my last name right. 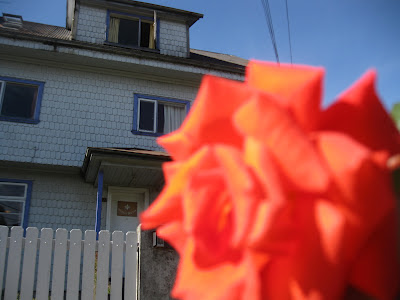 Even as the German settlers and their descendants have intermarried and assimilated into the general Chilean culture, the architecture in this part of the country is still influenced by the old German style.  In Puerto Varas and many other towns in the area you can find many more recent houses like our hostel, pictured here.  With wooden shingles lining the exterior walls and old-fashioned wood stoves to stay warm in the winter, these communities emanate a homey, residential atmosphere that made me think of what life must have been like in the US a few generations ago. 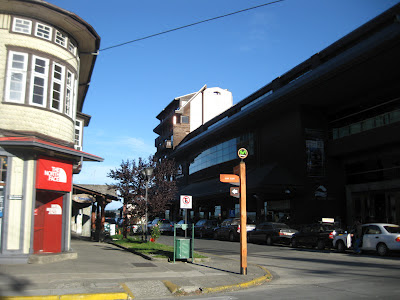 That’s not to say that the town doesn’t have plenty of modern influences.  With the amount of tourism flooding in during two distinct times of year, in the town’s small center you can find international brands and modern, hulking shopping centers interspersed with the older and more modest storefronts.  And like any tourist town, there’s plenty of shops selling clothes, souvenirs and local products, like delicious cheese. With much of the cheese we buy in Santiago being produced in this region, we went out of our way to buy a few samples while we were there. 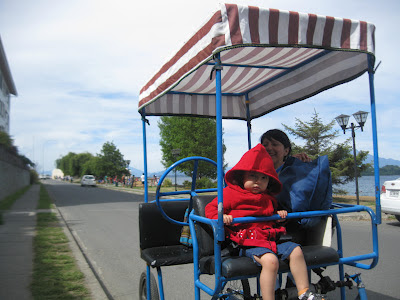 Since we didn’t have a car, we decided we’d rent a bike.  And since there were three of us, we decided to rent a bike made for three.  Pedal powered and with two steering wheels (although only one of them was actually connected to the wheels), we thought we’d found a nice form of local transportation.  But once we got a kilometer or so away from the center of town, we heard a loud pop and our ride started getting a lot rougher.  As it turned out, we’d blown a tire. 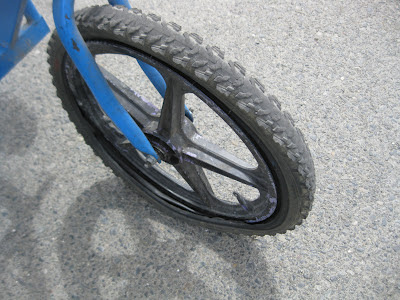 After some consideration, we came to the conclusion that one of us ought to walk back to the rental shop while the other stayed with our daughter and the bike.  Soon, a replacement bike was procured, and the girl from the rental shop was stuck pedaling the broken down vehicle back limpingly to its origin.

We continued our fancy-free tour around town, enjoying our liberating form of transportation, until we got back downtown, when some piece in the drive train happened to snap off.  The steering wheel was locked in place, and the front wheels were stuck turned a few degrees to the left.  Fortunately, we were less than a block from the rental shop, and we were able to muscle our vehicle back to where it came from without drawing too much attention to ourselves.  We weren’t sure how the girl would feel about us breaking two of her bikes, but she seemed to feel like it was her fault and looked embarrassed.  She even offered to let us use a third bike if we were interested, but we decided not to push our luck any further. 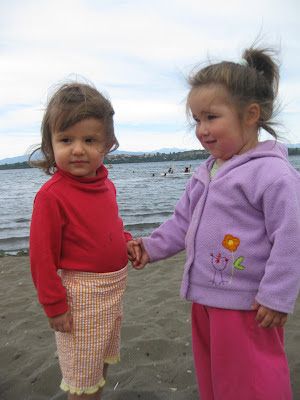 Instead, we opted to spend the afternoon on the beach.  The lake upon which Puerto Varas was built is icy cold, even in the summer.  Some people still braved its waters, and even more went out onto canoes and paddleboats.  Before our mechanical difficulties with the bike, we thought we might do the same, but considering our luck, it seemed like not such a good idea to head out onto the water in another rented vehicle.  So instead we spread out a towel and enjoyed a snack while taking in the beautiful view.  And Tamia made a friend about her size. 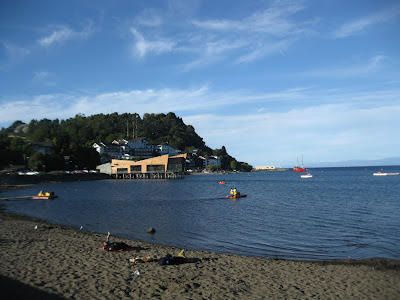 With the many national parks in the area, and with mountainous forests all around us, the lure of getting out of town and exploring was a strong one.  With our decision, however, to make a tour of as many destinations as possible during our trip, came certain consequences.  We were traveling at a time when lodging and buses were booked many days in advance, requiring us to anticipate how many days we’d spend in each place before we got there.  More than once, we left a place without having explored it as much as we might have wanted to.  That’s how it usually is when you visit a nice place, I suppose, and with luck this initial, exploratory tour of the south of Chile will not be our last.  In the meantime, we couldn’t feel too much disappointed, what with the many stops still ahead. 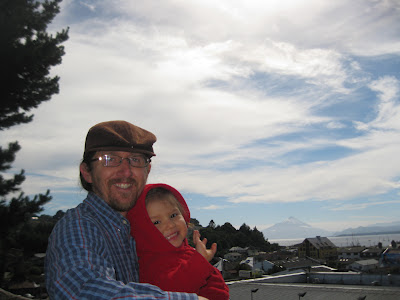 Brian Horstman is a teacher of English as well as a traveler, writer, photographer and cyclist. His interest in traveling around Latin America began while he was living in New Mexico, where he began to experience the Latino culture that lives on there. From there he spent time in Oaxaca, Mexico and has since been living in Cuenca, Ecuador and will be living in Chile starting in 2011. Cal's Travels chronicles some of his more memorable experiences from Mexico and Ecuador, as well as some side trips to other parts.
Read More Share
Sunrise on the Beach at Digha
London’s Bauhaus Exhibition: Art as Life at the Barbican