In the U.S., when we think of Oktoberfest, we think, naturally, of Germany.  German sausage, sauerkraut, maybe some German music, and everything written in a nice, German-looking font.  But let’s face it, we mostly think of beer.  So when I heard of an Oktoberfest happening in the small community of Malloco, a short drive from Santiago, I was happy to find out that here, too, Oktoberfest means beer. 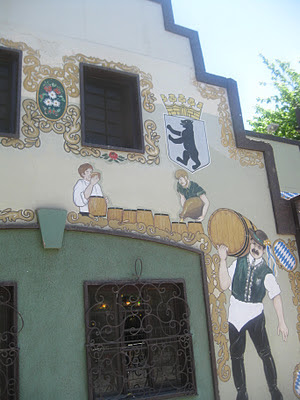 Apparently, la Fiesta de la Cerveza, in Malloco (read: Beerfest) started years ago with the restaurant pictured here, Der Münchner.  Indeed, the first thing we saw as we climbed off the bus from Santiago was the colorful front of this German restaurant, with the beer festival happening essentially in its back yard.

When I say “we,” I mean a group of English teachers like myself and other friends, all understandably curious about the very promising, long list of Chilean breweries that would be present and serving many varieties of their hand-crafted beers.  Upon arriving at the bus terminal, we discovered many, many buses with the words “Malloco: Fiesta de la Cerveza” scribbled on the sides.  Presumably, these buses would be making round trips all day long, shuttling partygoers to and from the capital and the party.  Just how many people would be there? 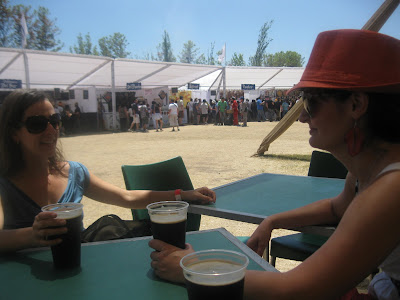 Once we had paid the 5000 peso admission (about $10 US.  Chile, defying the long held reputation that Latin America is a cheap place to travel, can be pricey), we wandered past several rows of stands selling commemorative steins, hats, and various things to eat.  After a few minutes of this, we began to wonder, where was all the beer?

But then the path opened up into a wide, dusty field encircled completely by beer vendors.  Literally, dozens of breweries.  And at that hour, right around lunchtime, there weren’t so many people at all.  So we went straight up to one of the first breweries that caught our attention and made a purchase.  Dark, delicious and cold beer.  Not your typical commercial pilsener; that day, there would be none of that.  No.  Nothing less than microbrew, at its flavorful finest.  We split up, some of us dedicated to enjoying our first pints in the shade, and the others striking out at once, intrepidly in search of the next cupful. 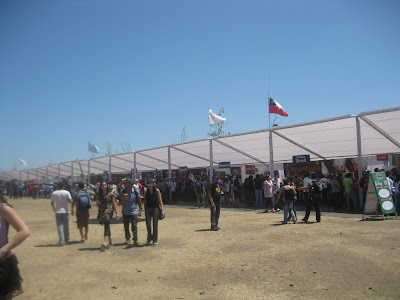 You see, we were not limited to one successful formula for enjoying an extended afternoon of sampling so many uncommon beers.  With the next several hours as full of promise as they were, the temptation was certainly there to enthusiastically take down a few pints in rapid succession.

Clearly, there were many festival goers who were doing just that.  But after an education at Ohio State University, my personal rate of consumption had been tempered by years of experience, and most of those in our party had clearly learned similarly. 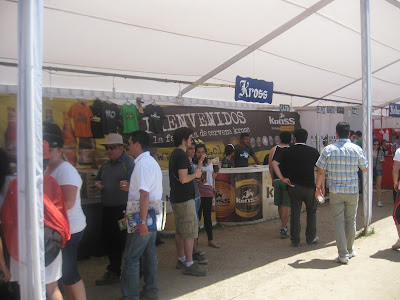 Rather than make the mistake of indulging with wanton abandon, then, only to be met with a physiological compulsion to sleep in the later afternoon, we chose to make our second beer purchase only after a shrewd sampling of as many different beers as possible.  Because of the relaxed atmosphere brought on by the low turnout at this early stage in the day, most of the sellers were happy to talk at length about their beer, their philosophy, and to give out free samples of an ounce or two of each beer they had on offer. 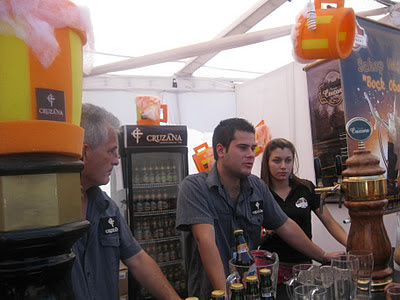 We spent a good couple of hours in this regimen of socializing and sampling, staying out of the relentless midday sunshine as much as possible under the cool shade of the canopies hanging over each stand.  It was in this way that we learned that the overwhelming majority of the many breweries in participation that day hailed from central Chile.  I didn’t hear of any coming from further north than La Serena, and not many came from much further south than Santa Cruz.  With the reputation of southern Chile as being the major beer producer that it is, that bodes well for future sampling as we begin to explore places like Valdivia and Puerto Varas.  Tasty! 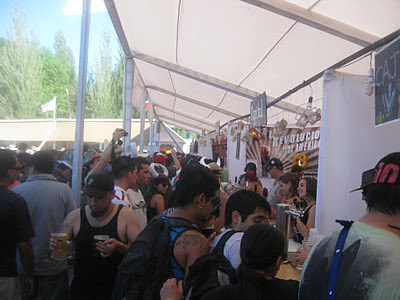 Time passed, and a second pint was finally purchased, with the benefit of a well-informed knowledge of what was available.  Moving in reverse, having started with a stout, my second beer of the day was an amber ale from a brewery I had never heard of before, and may well not hear of again until Fiesta de la Cerveza 2012.  But it was the one that stood out in my mind as having the nicest hop profile so far, and that was what I was going for that afternoon.

Meanwhile, the festival was filling up, and the beer stands were heaving with spirited clientele.  Thankfully, that didn’t mean that the vendors stopped giving out free samples, but the time for idle chit-chat was over.  Interactions with the bartenders became terse and to-the-point: 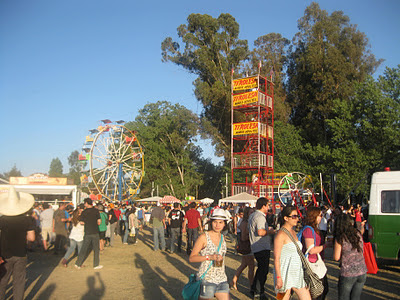 Deciding it was time to take a break from the crowds, we opted to have some food and some time to relax in the shade.  In the search for a place to sit down, we walked past the obligatory carnival section of the fairgrounds.

Incidentally, the little wheel behind the red tower is one of those contraptions that is designed to send you spinning along multiple axes at the same time.  The weekend before at the same event, a young man who had likely had too much to drink, decided he would stick his legs through the bars of the cage he was locked in for his safety while the ride was in motion, and his feet caught on the center axle, snapping his legs at the shin.  He died in the hospital a couple of days later.  Not surprisingly, that ride was not in operation the day we went.  Alcohol and carny rides are never a good combination. 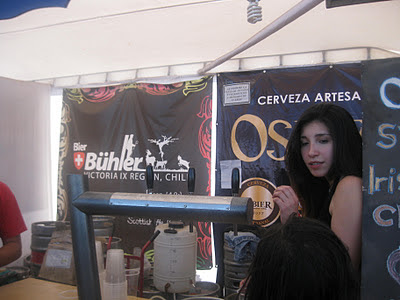 After a nice break, we launched back into our methodical sampling of virtually every beer on offer at the beer festival.  More stands were visited.  More beers were tasted.  Another pint was purchased, by me.  This time, it was an IPA, the only one I had found the whole day.  It was from this brewery, if I remember correctly.

A well-crafted IPA is one of my favorite beers, but in the US amongst microbreweries today, there seems to be a tendency to load the beer up with a quantity of hops far in excess of what an IPA traditionally called for.  The one I tried that day was well hopped, but not to the extreme like some of the “double IPAs” you can find.  I wanted to bring a bottle home with me, but at the end of the day this brewery became somehow elusive, and I couldn’t track it down.

When all was said and done, we had tried beer from just about every brewery available that day, over the course of five or six hours.  Drinking at a moderate pace for that much time doesn’t get you drunk if you do it right, but it was like a shift at work, and left us physically exhausted at the end.  The bus ride home was a rowdy one, us standing in the aisle with crowds of Chileans chanting hymns that all of them knew and none of us did.  Were they singing about politics, or football?  Instead I focused on the number of beer stains noticeably visible on the white shirts of many of the people seated around me.  Perhaps the people were on this bus and not behind the wheel for their own safety, and for the safety of others. 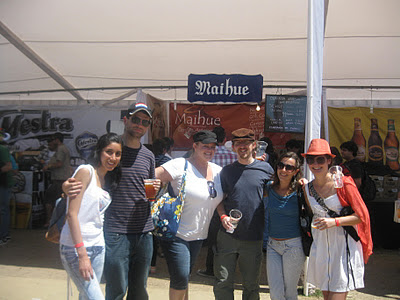 Brian Horstman is a teacher of English as well as a traveler, writer, photographer and cyclist. His interest in traveling around Latin America began while he was living in New Mexico, where he began to experience the Latino culture that lives on there. From there he spent time in Oaxaca, Mexico and has since been living in Cuenca, Ecuador and will be living in Chile starting in 2011. Cal's Travels chronicles some of his more memorable experiences from Mexico and Ecuador, as well as some side trips to other parts.
Read More Share
That Looks Slightly Out Of Place…
Chicago: A Polar Plunge With A Purpose