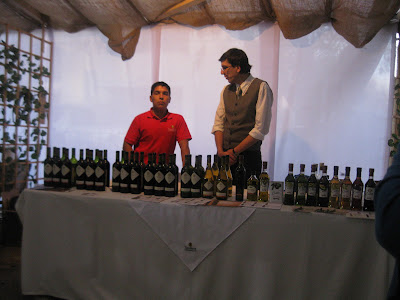 About this time last year we took a train to the town of Buin, south of Santiago and in the middle of Chile’s heartland of vineyards.  Steeped in wine culture as Chile increasingly is, the time of the grape harvest is marked by festivities all around Chile’s wine producing areas.  Buin is no exception, and being conveniently located on the rail line in close proximity to Santiago, it was a natural choice for our first harvest festival, known in Spanish as the vendimia. 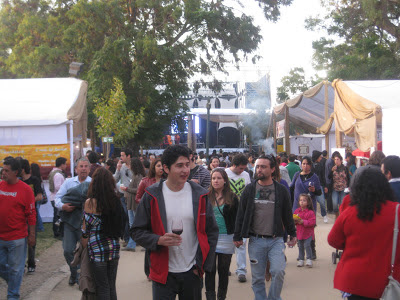 The popular Chilean vendimia is fun for all ages, although probably much more so for those old enough to drink.  In addition to the obligatory sale and consumption of wine, there were plenty of other vendors selling food, especially cheese, olives and grilled meats, traditional favorites all of local production and fine accompaniments to your glass of wine de rigor.

In the background of this photo can be seen the stage, idle at the moment of shooting.  Soon thereafter however it became the scene of some good-natured stomping performed by young foreign women from the crowd, persuaded to come on stage and get leg-deep into shallow basins full of grapes. 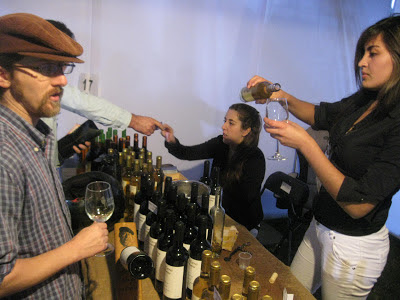 Having dispensed with the preliminary surveying of the grounds, it was time to roll up our sleeves and start appreciating some wine.  The two of us sampled four different wines each that day, always selecting vineyards theretofore unknown to us.

I have to say, unfortunately, that I was unimpressed by all of vineyards save one, Viña Richards.  If I remember correctly we had a Pinot Noir and a Sauvignon Blanc from them, and both were, in a word, tasty.  It’s rare to find either of those grapes in Chile, which was enough for us to gravitate towards them once we noticed them.

It didn’t take so long for us to get through our four glasses of wine, moderately portioned as they were.  Afterwards we moved on to the grilled meat section of the festival, where we ate some shish kebab, known locally as anticucho, followed by some larger cuts of chicken and beef.  Damn, that’s good!  From this particular angle you can see the meat skewers on the grill, as well as where you stick them once you’ve picked them clean.  Also featured is our daughter practicing cueca from an unorthodox sitting position.

It might seem antithetical to a celebration like this one, but I saw this brewing company on the way in, and couldn’t resist picking up a pint draught on the way back out.  The stout was a fine finish to the evening and kept me occupied for most of the walk to the train station.

We concluded our evening with a sleepy train ride back to Santiago’s nicely appointed Estación Central, which connects conveniently to a subway train taking us within two blocks of our apartment.  A fine way to travel, and best of all, the conductor is our designated driver.

Brian Horstman is a teacher of English as well as a traveler, writer, photographer and cyclist. His interest in traveling around Latin America began while he was living in New Mexico, where he began to experience the Latino culture that lives on there. From there he spent time in Oaxaca, Mexico and has since been living in Cuenca, Ecuador and will be living in Chile starting in 2011. Cal's Travels chronicles some of his more memorable experiences from Mexico and Ecuador, as well as some side trips to other parts.
Read More Share
SXSW LOSING THE WEST: What Will We Sell Before the American West is Gone
Hollywood Lifestyle Downside: Keeping Reality & Fiction From Blurring