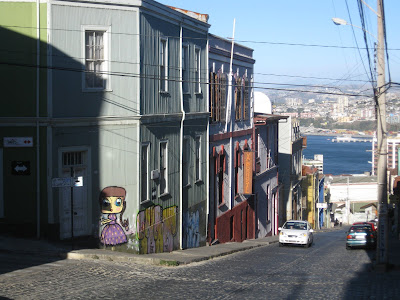 We had been planning to move to Chile for quite awhile before we actually came, and all the way up until we arrived in Chile, our target for a new home had been Valparaíso.  As such, I spent months researching it on the internet.  Looking for jobs.  Searching for apartments.  Checking out other blogs, looking at photos, and going to Valparaíso’s website, which is one of the best I’ve seen from any city.
The photo above, taken during our first weekend here in Chile, really sums up what I had anticipated for our potential new hometown.  Artistic graffiti, gracing the pastel walls of a building perched on a narrow cobbled street that runs sharply down a hill, affording a glimpse of the inspiring blue waters of the bay below.  Before we came, lots of people told us that we wouldn’t like it as a place to live.  It was lovely, but disorganized.  Bohemian, but dangerous.  Despite all of that, we looked at more photos and contacted more employers, and kept our sights on Valparaíso.
Our first weekend there was our chance to hit the ground running.
To take in the sights, to get a feel for the area and also to think seriously about work and apartments. We came to Valparaíso by bus, which left us at the bus station in the only flat part of the city I’ve seen. Our hostel was in the heart of the city’s colorful hills.  When in any new place, what better way to get anywhere than to walk?  It took us awhile, but our journey to the hostel also served as a nice impromptu tour of the city. 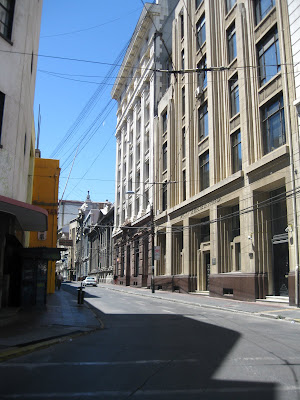 The first half of our walk was through El Plan, this decidedly non-hilly business district near the waterfront.  This is where you’ll find the concentration of Valparaíso’s tallest buildings, and on any day but Sunday (which is when I happened to take this photo), its highest concentration of people, as well.  Valparaíso is said to have once been of more importance than the capital city of Santiago, in the days before the opening of the Panama Canal.  At that time its port was thriving, contributing to the city’s economic growth.  Many Europeans also wound up here as new residents, during those times when other cities like New York, Buenos Aires and San Francisco were also booming with immigration.  This has led to some interesting effects today in Chile, where many people have English or German last names, for example.  Because of the Latin American habit of naming streets after people, lots of streets have English names too, which then get run through the filter of Spanish pronunciation.  That’s confusing at best, especially when you’re trying to ask for directions.  As for some Teutonic cultural references, you can find sauerkraut at many restaurants and markets in Chile, for example.  And draught beer abounds, bearing the decidedly German-sounding name of schop.  Loan words in Spanish are quickly assimilated into the language’s abundant list of suffixes, and so you can get a frothy schop at your local schopería, for example. 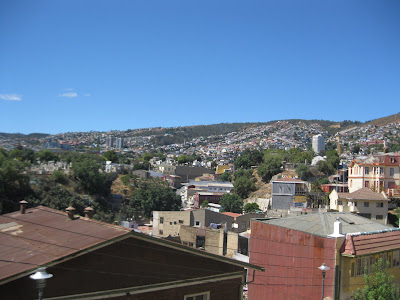 The next leg of our little tour took us up into Valparaíso’s famous hills.  By popular count, the city has no fewer than 42 hills, all spilling over with buildings in various states of repair.  Valparaíso is defined by its port, and its prosperity as a city has hinged upon it.  But its hills define it every bit as much, governing its shape and design and giving rise to modes of personal transportation unseen in most other towns, as we will see. 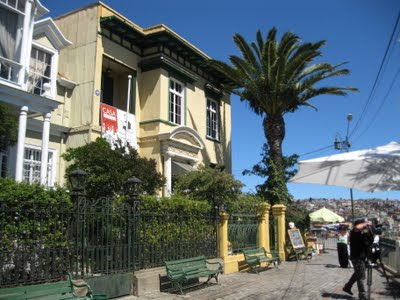 Some of the hills, most notably Cerro Alegre and Cerro Concepción, have become dominated by the tourist industry and the predictable changes that come with it.  Beautifully and tastefully restored buildings help draw in tourism, which then brings more money to these neighborhoods for even further restoration to take place.  A positive feedback loop that brings about a positive change for a neighborhood.  On the other hand, prices go up, to be sure.  And some level of authenticity is somehow compromised in the bargain, as a neighborhood transforms from something real into something more of a dream to be sold.
Which then leads us to ask, what is the authentic reality in a city like this?  Can it be found in the other hills, in those places still very much unrestored?  In some cases, this might mean that you’ll find some seriously run down buildings and sketchy neighborhoods.  I would imagine that like most cities, you’d have to really spend time there to find out what it’s really about.  But the layout of this city upon such unlikely geography means that even if you lived there, you’d have to be dedicated to doing a lot of determined exploring if you wanted to see it all. 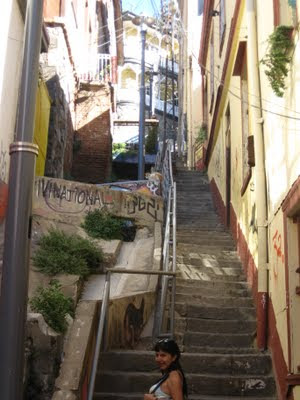 Unless you’re downtown, every street you take winds unpredictably through the hills, and to complicate things further, many of the streets are sewn together by staircases and alleyways spiraling up and around, so much so that you have to wander up or down in order to figure out where they’ll end up taking you.  A cartographer’s nightmare and a photographer’s dream. Many houses, like the hostel we stayed in, have their only entrance in an alleyway like this one, making most of them thoroughfares unto themselves with names and addresses.
You would think a town like this would defy motorized transportation altogether, with so many hills, narrow streets and cobblestones.  Not entirely true.  There are still plenty of cars and buses around.  Splitting the difference between the two, there are even taxis called colectivos that work just like buses.  They follow a fixed route and you pay a fixed price, and you get on or off where you need to.  Try to imagine a bus on some of these streets and the colectivo concept starts making a lot more sense. 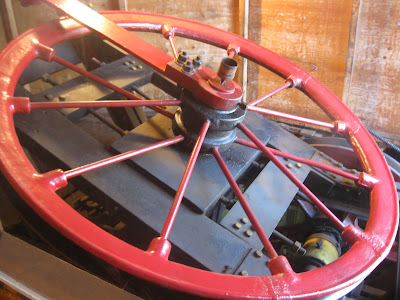 The indisputably most unique and iconic way to get around Valparaíso, however, is the ascensor.  So iconic are they, so synonymous with the city in the mind of the tourist, that I won’t show you a picture of them. The fact is, none of the pictures I took of them were very representative.  Instead, I give you an image of the antique wheel that pulled the one we took.  We paid a small fee, we boarded the little metal box with windows with a view over the harbor, and up the hill we went.  At the top was a beautifully restored lobby where people must have once waited to go down to work from their home up above.  Today, the ascensores are mostly for tourism, but they are as practical a form of transportation as ever, and the cost isn’t so bad.  If you’re interested in seeing what they’re really like, wait until I write about Valparaíso again someday.  Or check them out online, as there is no shortage of photos and videos of them.
Our next image will serve, among other things, to demonstrate that at no point during a visit here are you ever far from the sea, and Valparaíso’s port.  In the background you’ll see three aspects of the port, if you look carefully.  In the back right are some military vessels, symbols of Chile’s naval history.  Over my wife’s shoulder is a big cruise ship, lots of which now stop over regularly in Valparaíso along tours of the south Pacific.  And finally, behind the cruise liner is the top portion of the big blue workings of commercial port machinery, busy manipulating multicolored containers from ship to port and vice versa.  The Panama Canal may have put a prolonged hurting on Chile’s historical port, but today’s biggest commercial freighters and tankers are bigger than the designers of the hundred-year-old canal ever imagined.  As such, massive ships once again plow through the Drake Passage and around the South American continent, giving Valparaíso a newfound relevance as a port city. 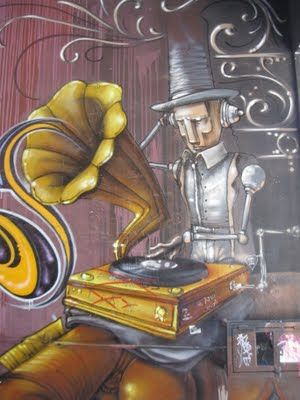 No mention of Valparaíso would be complete without talking about the street art that exists there.  At the same time, no single mention of Valparaíso’s street art is capable of capturing it all.  The city is overflowing with graffiti, in every neighborhood and every alleyway.  Commissioned or clandestine, and from fine art to random black-paint tributes of adolescent love.  I won’t even try to explore the the street art of Valparaíso any further than to say that as much as the port, as much as the hills, the art on the walls around the city help make the city what it is.  Like the other aspects of the city, the many murals are supremely photogenic.  Reviewing the couple hundred pictures I took during our three days in Valparaíso, I now find myself comparing them with my memory of the many things we saw.  I can’t help but feel like I did a lousy job of documenting our trip.  I guess we’ll have to go back.

Which leads us to the ultimate question of today’s missive.  What happened to living in Valparaíso, after so many months of talking about moving there?  Rather than going into an even lengthier explanation, I’ll say that this has been a fine example of the delicate balance between lofty dreaming and basic pragmatism.

Many of these posts descend at certain moments (as this one is now doing) into indulgence. Imagining a life high up in a green tropical valley, in a cabin on some lost beach, or in a city more romantic than practical.  Deep down, the habit of traveling and living in new places rather than just visiting them for a week might satisfy in some way this latent urge I seem to have.  Anywhere I visit, my mind begins to turn, entertaining the notion of what it would be like to live in this place for longer.

Then the other side begins to emerge, as these imaginings begin to reveal certain real complications.  The mundane concerns of every day life cannot be ignored.  And so we have found our home in Santiago after all, where it’s simply easier for travelers to settle down and get started.  Here, we have discovered pleasant parks and a level of organization I’ve never seen elsewhere in Latin America.  After years of living in less regulated places, I have to admit there’s something satisfying about the added structure to be found here.  We also have friends here who we met in Ecuador and who have since established themselves in Chile long before our own arrival, which has been a boon to our little family in so many ways.

In the end, I don’t feel as though we’ve settled for Santiago over Valparaíso.  Since the day we came, I’ve been pleasantly surprised by how much I like it here, in this city I had essentially ignored as a place to live.  One of the greatest things about traveling is discovery, finding the places you like, and learning from yourself about what places you end up finding yourself at home in.  Future musings will no doubt explore such notions in time. 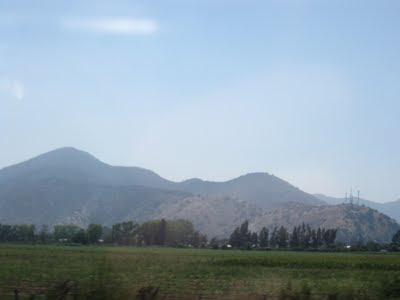 Brian Horstman is a teacher of English as well as a traveler, writer, photographer and cyclist. His interest in traveling around Latin America began while he was living in New Mexico, where he began to experience the Latino culture that lives on there. From there he spent time in Oaxaca, Mexico and has since been living in Cuenca, Ecuador and will be living in Chile starting in 2011. Cal's Travels chronicles some of his more memorable experiences from Mexico and Ecuador, as well as some side trips to other parts.
Read More Share
Preparing a Tandem Bicycle for the Andes and the Amazon 6
Inside the La Sagrada Familia