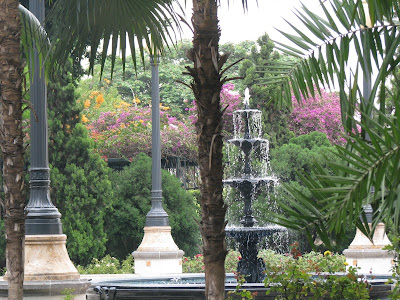 Or at least, one very exceptional part of it. Most of the city doesn’t look like this. In fact, over the years Guayaquil has developed something of a bad reputation. I’ve made my way down from the mountains several times to go to Guayaquil, usually purposes other than sightseeing in the city, and have seen some of its sights nonetheless.

Over the course of my various trips to the big, sweltering city, I’ll say that there’s plenty to see and do here, after all. I’ve been told that much of what I’ll present to you here is recent development. That Guayaquil was (and still is) plagued by crime and poverty not plainly seen in a walk along its touristy bits. Recent city mayors have focused their attention on cleaning up their town and making it more attractive to locals and visitors alike, and while there still may be lots more to do, let’s take a look at some of the finished products. 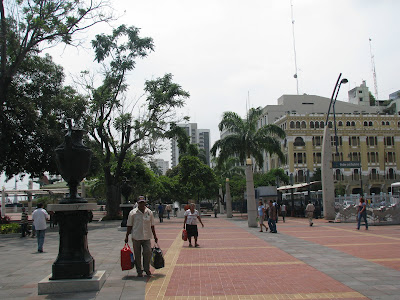 The first place on our tour, and the first stop for most people visiting from out of town, is the Malecón 2000. Completed around the beginning of the decade, as the name would suggest, it represents the greatest portion of a massive renovation of this part of town.

Enjoyed by guayaquileños as much as it is by tourists, this pedestrianized center overlooks the river Guayas and is home to many of the popular sights in the city. Like the park featured above. Located in the middle of the Malecón, the park is loaded with statues, tropical birds and trees, fountains, ponds, and benches from which to enjoy them.

I won’t be showing you all of it here, but the scenic avenue extends for about two miles along the river, connecting other popular stops on the tourist circuit, and is heavily patrolled by security guards. As a result, you can safely and conveniently see much of downtown Guayaquil on foot. Ducking into the nearby city blocks around the Malecón, it becomes clear to the visitor that the surrounding area is benefitting from the restoration as well. Foot traffic is good business, and by providing a safe, walkable avenue in the heart of downtown, the local economy has benefitted as a result. Not to be left out, big business is also well represented on the Malecón; a shopping center, McDonald’s, and an IMAX theater are all featured prominantly along the boardwalk.

Heading north along the riverfront, the iconic Rotonda. I’m happy to report that in renovating this part of town, plenty of attention was given to recognizing its history as well. And the biggest, shiniest example of this is the monument above, which commemorates the famous meeting of two of South America’s greatest revolutionary agents. Simón Bolívar, Venezuelan, who envisioned a plan for Gran Colombia, a united nation spanning the South American continent, fought the Spanish crown in the north of the continent.

And, José de San Martín, Argentinian, who commanded the revolution to the south. San Martín had fought his way to become the Protector of Peru, and the Battle of Pichincha, fought by northern troops, had sealed the revolution in the mountains around Quito. The paths of these two liberators were drawing closer to one another.

And so, the two great generals, having previously corresponded but never met, chose Guayaquil as the place to discuss how the revolution would continue. The details of their meeting were kept a secret, but San Martín’s subsequent withdrawal to Argentina, and later Europe, leaves it pretty clear that the decision was to leave the revolution in the hands of Bolívar. 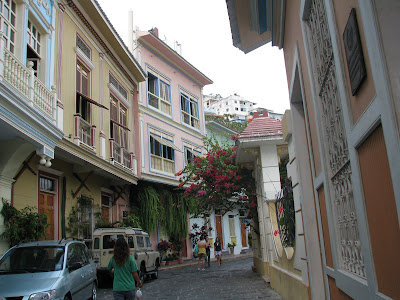 The place of the original Spanish settlement of the area, many of the buildings found here today predate the fires of 1896 that forever transformed the face of the the surrounding areas.

Thus, a walk here is a walk back in time. And, hopefully, a walk into the future, as renovations begun here, with luck, will continue into other nearby neighborhoods. Most notably in need of attention is the next hill over, here seen rising up above the backdrop of Guayaquil’s steaming downtown. 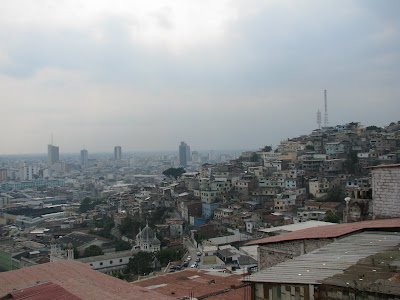 For the time being, the visitor can content himself winding his way up to the top of the Santa Ana hill, which is topped by a lighthouse and chapel, and where the history lesson continues into Guayaquil’s maritime past.

As the locals will warn you, however, it’s important to stay on the route marked off for tourism. As I innocently wandered through an open iron gate into what I would consider a more authentic corner of the neighborhood, a boy spotted me and called to his father, who politely told me that I ought to be heading back the other way. Was he kindly directing me away from perceived danger, or just telling me to get out of his neighborhood? While my wife optimistically suggested the former, I couldn’t help but sense a no trespassing current underlying his words. Either way, I took his advice without much protest. I was, after all, the visitor.

This particular visit to Guayaquil came during the days before New Year, which in Ecuador is a big party loaded with unique and interesting traditions. Here, you can read about my impression of New Year’s back in Cuenca, if you’d like to know more about how it goes. By the looks of things in Guayaquil, things are more or less the same this time of year as they are in Cuenca: 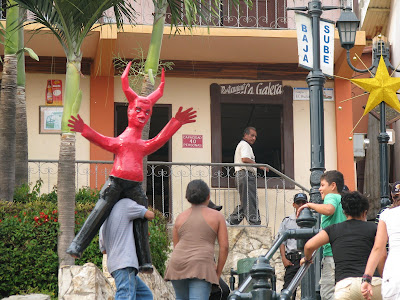 Here, on the stairs back down from Santa Ana, a man with his monigote. Also known as años viejos, these papier-mâché dolls make the rounds on the streets in the days prior to the New Year’s celebration, with which, by donating a few coins to the doll’s bearer, you can unload some of your Old Year gloom, which will later be burned in effigy.

Indeed, not long after this photo was taken, two boys came to us with their own painted devil, asking for some change. We gave them enough for some candy and went on our way, a modicum of bad energy lighter than we had been.

Back down to the Malecón and to the Rotonda, which marks the entry into Calle 9 de octubre, named for the Independence Day of Guayaquil in 1820, and which fittingly begins at the monument dedicated to the two revolutionary generals who met there two years later.

Today is a bustling commercial avenue, lined with tall buildings, restaurants, and retail. And lots of people. Walking, driving, sitting, selling. Selling water, selling food, selling all manners of random plastic merchandise. Crossing the streets in this part of town is an exercise in patience, and in following the herd. Each intersection is a bottleneck, and at each corner you’ll find yourself in a flock of pedestrians all waiting for the right time to go. And, traffic lights or no, the right time is when enough people start across that you’ve got safety in numbers, and everyone takes the cue.

A few blocks going like this, and you’ve made it to the Plaza Centenario. Home to this massive monolith: 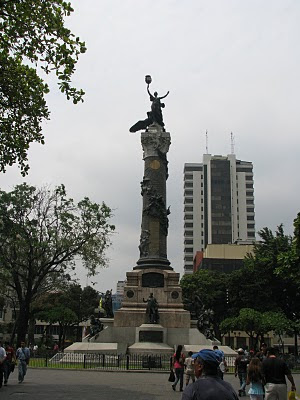 It’s also a home for the napping homeless, to tropical birds, and, more unexpectedly, to iguanas. There’s a separate city park not far from here dedicated specifically to the iguanas, but somehow, a lot of them have ended up here, too. A better place to live, in certain ways, as this park is as big as four city blocks. These iguanas, clumsy as they are, like to climb trees. A common sight and sound here is the scratching of their desperate, clambering ascent up a tree trunk, and almost as common is the sudden drop of one of the reptiles, often from a high-up branch. And yet, despite the fall, each one I watched fall somehow managed to walk away from the scene with no visible fall-related injuries.

It was here, in this park, where I’ve ended almost all my trips to Guayaquil. It was here where I rested after getting my official document from the US consulate which I needed to get married here in Ecuador. When we went on our honeymoon, it was here where we relaxed during our long layover between flights. Here my wife and I recently found ourselves again, this time with our daughter, after my 2nd visit to the consulate, for her US birth certificate and passport.

And here, our little tour of Guayaquil will come to an end. I’ve left out plenty of what I’ve seen, and I know there’s plenty more to see and do that I still haven’t discovered. And I know I’ll be to Guayaquil again, if only to make my way to its airport or massive three story bus terminal on the way to somewhere else. But if I’ve got the time, I’d like to give Guayaquil itself another look, and see what else this big, tropical city has to show me.

Brian Horstman is a teacher of English as well as a traveler, writer, photographer and cyclist. His interest in traveling around Latin America began while he was living in New Mexico, where he began to experience the Latino culture that lives on there. From there he spent time in Oaxaca, Mexico and has since been living in Cuenca, Ecuador and will be living in Chile starting in 2011. Cal's Travels chronicles some of his more memorable experiences from Mexico and Ecuador, as well as some side trips to other parts.
Read More Share
Loss Always Provides An Opening
To Taste Paris is to Know Paris