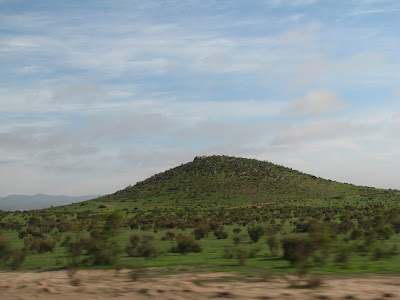 Late last winter, during the famed September holidays of Chile, we decided to head north.  Our ultimate destination was La Serena, but along the way we made a stop in a small agricultural community called Ovalle.

Chile’s unique shape leads one to think linearly in terms of travel within the country.  With Santiago just about in the center of the country, unless you decide to hop in a plane the limits of your traveling will be predicated on how many hours you can stand to be on the road.  It’s for that reason that many Chileans know their own country only as far north as La Serena or so, and as far south as Puerto Varas or Chiloé. That’s about as far as most people are willing to drive at one stretch, and those with the money to fly often choose more distant destinations, such as Buenos Aires, Brazil, the Caribbean or other places in the US or Europe, rather than San Pedro de Atacama or Punta Arenas within their own country.

As travelers of modest means, those same limits apply to us as well, and the extremes of the Atacama Desert and rugged Patagonia are, so far, still unknown.  But once we set our sights as far north as La Serena, a little research turned up an oddity of a national park known as Fray Jorge along the coast near Ovalle.  Generally speaking, as you head north from Santiago the climate grows drier and drier, and to the south wetter and wetter.  But Fray Jorge is an exception, a dripping wet forest lying some 7 hours to the north of Santiago and surrounded by arid landscapes.  Why not check it out?

So we got a hotel in Ovalle and started looking for a way out to the coast.  It turns out there’s no public transport heading there, and no rental car agencies in such a small rural town.  But a few taxi companies were scattered around the main strip, and boasted turismo among the variety of services proffered on their signs.  After some negotiating I was able to work out a reasonable price for a full day trip to Fray Jorge and another potential destination or two to be decided.  So after a night’s rest with cable TV, we got in the backseat of an SUV and were on our way. 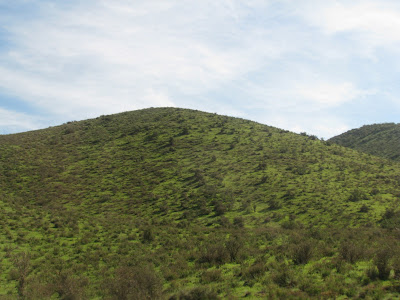 As we drove through the countryside, we saw some scenery atypical of the area, as our driver told us. The green hills all around were the result of some recent rain a few weeks before, provoking the light, bright coat of grass to sprout up around what was normally bare earth speckled with shrubs.  Like many arid climates, the vegetation is opportunistic and sprouts whenever moisture may come, regardless of the season.

But as we headed up the valley, the hills got higher and the green grass gave way increasingly to brown, until we reached the final geographic hurdle separating us from the coastline.  The line of hills pictured here in the background hold back moisture wafting in from the sea, which coalesces like clockwork every day against the hillside.  By virtue of that heavy blanket of precipitation the vegetation resembles forest seen normally only as far south as Valdivia, some 7 hours south of Santiago.  Also seen along those hills is a swatch of road which would carry us up and over to the other side. 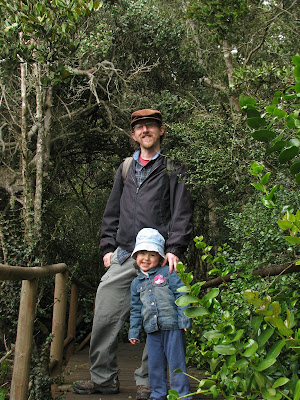 There you have it.  Forest in the desert, how about that?  It was fun to walk around in the woods for a little while.  Our daughter hasn’t had too much opportunity to do that in her short life so far, but every time she does, she has a great time.  This hike was well defined by a raised boardwalk, which made it tough to get lost.  Even though it was a bit slick from all the moisture literally dripping from the trees on many parts of the trail.

The cloud of mist hanging over the forest, known in an indigenous language of the area as camanchaca, is the source of moisture for many plants and animals living in the otherwise dry north of Chile.  Similar mists and fog blowing in from the coast grace the landscape of other parts of the northern deserts of Chile as well, and help to explain how any vegetation can exist at all in places with no rainfall in recorded history. 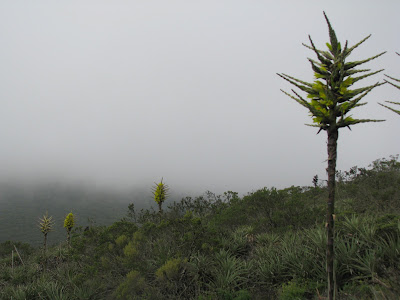 Apparently this forest was once more extensive than it currently is.  In fact, the area covered by real forest is actually pretty tiny.  While fog covers much of the surrounding area, the vegetation is low-lying along most of the hillsides, resembling a much greener, denser and happier version of the same kind of water-starved shrubs, cacti and grasses seen on the opposite side of the range.

Pretty and nice to walk around in, but it was no forest.  Some say climate change is the culprit of such deforestation, while others blame direct human exploitation of the area for timber and firewood over the years.  At any rate, some 100 square kilometers of misty hillsides are now under the protection of Chile’s CONAF, and from what I’ve seen in my limited interaction with CONAF’s park rangers and infrastructure, they run a tight ship. 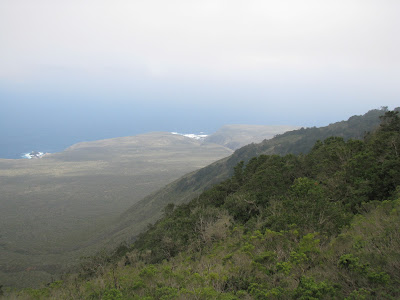 The trail also affords one a view of the sea from a privileged vantage point at around 600 meters above sea level, and while the mist hanging over us obscured the view, it was still an impressive glimpse of the Pacific.  It was a nice reminder that anywhere you may be in Chile, the ocean is never far away. 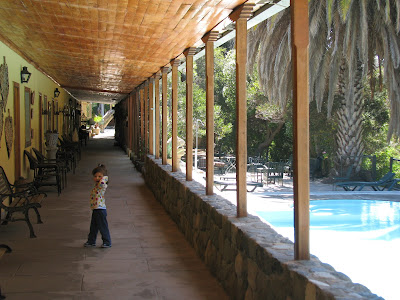 Our driver recommended a couple of other places we could go.  One, El Valle del Encanto, is a canyon, home to an assortment of pre-columbian petroglyphs and other ancient relics, but would have involved a few more kilometers of hiking.  At another stage of traveling life, this would have been the more attractive option, but with our little girl as part of the troupe, two hikes in one day would have been pushing it.

So we opted for the more relaxing alternative, Termas de Socos.  That was a set of hot springs in a resort.  After a previous experience with some nice rustic hot springs in Pucón, that sounded like a fine idea.  In the photo here you can see a very promising pool, for example, to the right of our little girl.  But oddly, that was not hot water.  It was damn cold, in fact.  Hence the total lack of bathers.  The real hot spring water, inexplicably, was pumped only into bathtubs of the sort you would have in your own bathroom, tiny and narrow, each located in exceedingly uninviting private stalls.  Fortunately, the receptionist at the resort gave us a chance to check out the facilities before we paid, and after a cursory inspection, we promptly headed back to the car.  It was baffling to me that a resort would develop such nice facilities, only to set up the main attraction, the hot springs, in such an unattractive way.  Any resort I’ve been to before has either built public pools, or designed private baths in a setting more in touch with the overall design of the resort itself.

That was too bad.  But it illustrated a more general observation we had of Ovalle.  The town of Ovalle, too, bustling with activity for a community its size and seemingly a fine place for the local people, was nonetheless at something of a loss for what to do with visitors.  While it is surrounded by a number of nice attractions for tourists in the near vicinity, we were the only tourists to be found in the area, and this during a week-long holiday when literally millions of tourists were in search of vacation spots.  As a destination, Ovalle is decidedly off the map for travelers.  Which begs one of those chicken-and-the-egg quandaries.  Does Ovalle lack tourists because it is unprepared to receive them, or is the infrastructure lacking because no one comes to enjoy it? 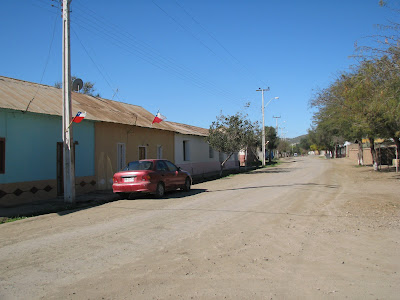 It was with such questions in our minds that we descended on our lunch spot for the day, in a small town not far from Ovalle.  It reminded me a lot of a town in Mexico I had once visited while staying in Oaxaca, Mexico, with a similar climate, atmosphere and architecture. It was a quiet, unassuming place you wouldn’t think to visit, or even know how to get there, unless a local took you there.  It enjoyed a beautiful setting in the same wide, fertile valley as Ovalle, and was home to a local restaurant with an expansive outdoor area with plenty of tables to choose from. 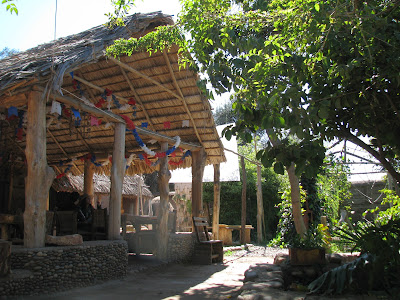 Decked out in the patriotic red, white and blue of Chile’s flag in honor of the national holiday we were celebrating, the restaurant served several rustic dishes featuring local ingredients.  We decided on roasted rabbit with salad and rice, and empanadas filled with cheese and farmed crayfish, and weren’t disappointed.  Wash that down with some Escudo beer and you’ve just had a typical lunch characteristic of northern Chile.  In a place truly off the beaten path, it was a fun way to start our trip to El Norte Chico.

Brian Horstman is a teacher of English as well as a traveler, writer, photographer and cyclist. His interest in traveling around Latin America began while he was living in New Mexico, where he began to experience the Latino culture that lives on there. From there he spent time in Oaxaca, Mexico and has since been living in Cuenca, Ecuador and will be living in Chile starting in 2011. Cal's Travels chronicles some of his more memorable experiences from Mexico and Ecuador, as well as some side trips to other parts.
Read More Share
All Senses Explode in Tchaikovsky’s Eugene Onegin
Mardi Gras: The Why’s, The Hows & The History