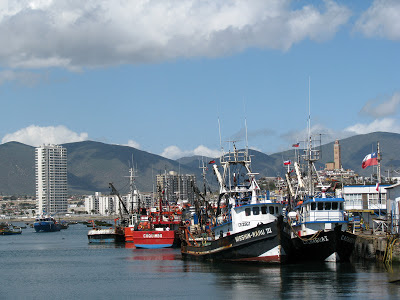 Close to La Serena in the “short North,” (el Norte chico) of Chile, situated on the south end of a calm bay, is the port city of Coquimbo.  It’s so close to La Serena, in fact, that it has always vied with its nearby neighbor for prominence in the region, much as Valparaíso does with Viña del Mar along the coast nearer to Santiago.  La Serena is much older than Coquimbo, and today is much more recognized as a tourist destination.  Coquimbo, for its part, is an important center of shipping for the 4th region of Chile, and has even lent its name to the area, also known as the region of Coquimbo. 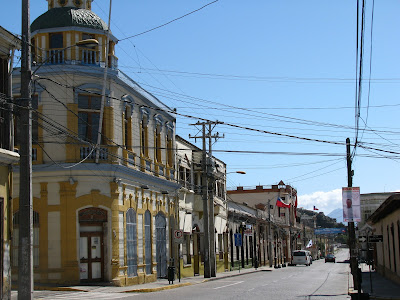 Because of its history as a port, it received a lot of European immigration in the 1800’s much as Valparaíso did.  It’s not as recognized for this fact as Valpo, but today you can still find sections of the city with the same kind of architecture you’ll find in Valparaíso’s hilly historic districts.  Granted, there aren’t as many old buildings as Chile’s more famous port to the south, and Coquimbo doesn’t receive nearly as much tourism, but if you pay a visit to La Serena it’s well worth the time to spend an afternoon in el barrio inglés, and then take a walk down to nicely renovated costanera on the seafront. 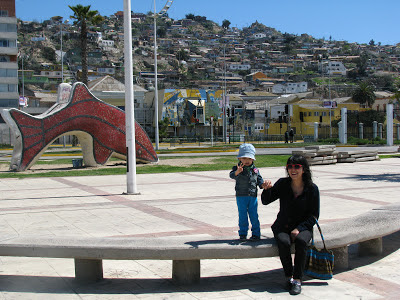 From there you get a nice view of the sea, the many ships waiting in harbor, the city of La Serena across the bay, and the green hills pictured above.  But if you turn your back to the seafront, you are also treated to a nice view of the city of Coquimbo itself.  Then you realize that the comparison of Valparaíso and Coquimbo doesn’t stop with their shared history as ports.  Coquimbo’s geography is much like Valpo’s, with the city spilling onto and over the hills surrounding the bay.  In many ways – geographically, as a port, for its historic center – Coquimbo can be considered something of a Valparaíso in miniature. 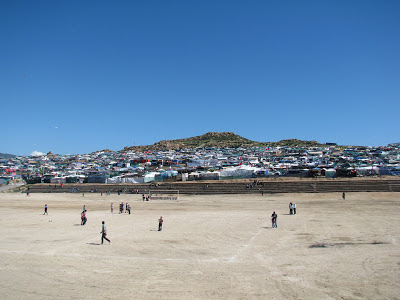 But if there’s one thing that sets Coquimbo apart from any other city in Chile, it is the pampilla.  A huge outdoor festival taking place during the fiestas patrias of Chile for several days around September 18th, people flock to Coquimbo to camp, buy, sell, eat, and drink.  Across the open field you can see countless tents set up to form a temporary city, with an estimated 100,000 people or more, coming for the day or for several days in a row. 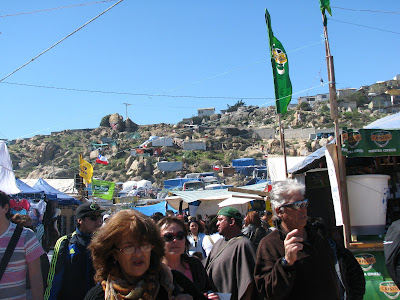 The city of Coquimbo itself, in fact, was very quiet that day, and many stores and restaurants were closed.  That’s because, during the fiestas patrias, so many people relocate from the city to the pampilla.  Individuals, but also businesses.  Restaurants and clothing stores set up outdoor stands.  But also hardware stores, real estate agencies, electronics sellers.  The pampilla concentrates the entire spectrum of humanity into a glorious spectacle of sun-drenched revelry.  Have a beer, have another.  Eat some barbecued meat, and why not?  Buy a power saw, or your next apartment!

We stayed at the pampilla long enough to share a pitcher of beer and lunch fresh off the grill, and left before the sun went down.  As fun as it was, we got the idea after a few laps around the main rows of restaurants and shops.  We never saw the crowning of the pampilla’s beauty queen, or any of the live music going on at the main stage.  But I did pick up a bottle of chicha, a sweet, fizzy, boozy, fermented grape juice on the way out.  That way we could keep the party going in our own quiet way back in La Serena, and let things go as they would, with or without us, back in Coquimbo. 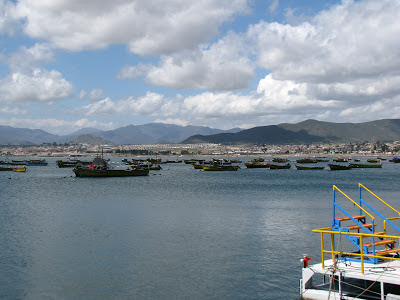 Brian Horstman is a teacher of English as well as a traveler, writer, photographer and cyclist. His interest in traveling around Latin America began while he was living in New Mexico, where he began to experience the Latino culture that lives on there. From there he spent time in Oaxaca, Mexico and has since been living in Cuenca, Ecuador and will be living in Chile starting in 2011. Cal's Travels chronicles some of his more memorable experiences from Mexico and Ecuador, as well as some side trips to other parts.
Read More Share
Calistoga’s Barolo Restaurant, Where Italy Meets Napa
The Colorado Mountains, Home To The World’s Highest Whiskey Distillery