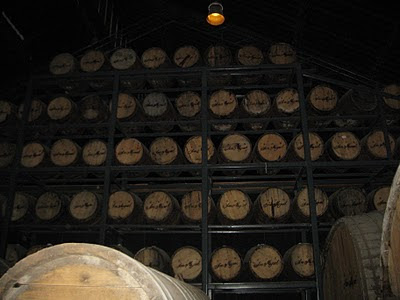 Anyone standing at the foot of a rack like this, staring up slack-jawed at the myriad of barrels towering above and knowing that each one is filled to the brim with distilled spirits will react in a predictable way, I think.  My personal reaction, one shared by the group I was with, was something like, “Damn, that’s a lot of rum!”  I imagine that’s generally the effect that the proprietors of Ron San Miguel expect.

Months before, as I was reading a description of the place, it was undeniably the sheer quantity of rum that caught my attention: “200 million liters of rum in oak barrels.”  Hmm.

There I was, absentmindedly browsing a bulletin board at work as I passed the time during a break in a workshop for teachers at the beginning of our fall semester.  It was that day, incidentally, that we were all placed on spontaneous lockdown at the office, due to the news that the national police force was rising up in rebellion against the president.  But that, as they say, is a story for another time.  Because it was that day also that I hatched a plan to organize a trip for a select cadre of our teaching staff to go and see those 200 million liters of rum for ourselves.

Perhaps an alcohol related outing was not an appropriate one for working professionals to embark upon, or for me to organize.  But on the other hand, the bulletin board I had been reading was for our organization’s department for US college kids studying abroad.  So certainly if university students could be considered for such a trip, older, more mature educators such as ourselves would be fine.

Ever since I was pulled aside during a trip to Isla de la Plata near Ecuador’s coast to do some Spanish-English interpretation between our tour guide and the rest of the non-Spanish speaking tourists, I’ve entertained the thought of organizing tours as an alternative or supplement to teaching English.

So as I turned the notion of this trip to Cava Ron San Miguel around in my mind, I decided it would be a decent way to actually see how complicated it is to put a trip together.  That, in addition to seeing the aforementioned millions of liters of rum.  For this one, transportation and the entry fee at our destination were the only real costs involved, and as such, it seemed simple enough to set up.  Since I was a novice at organizing trips, I didn’t want to actually make any money at it, so I just calculated the per capita cost for the prices I’d been given, which turned out to be only about $5 per person.  You’ve got to love Ecuador for its low cost of living.

It took me a couple of months to get around to actually making the trip happen.  And so it was on a rainy Friday in November that an assortment of English teachers boarded a red tour bus and set off to see all that rum for ourselves. 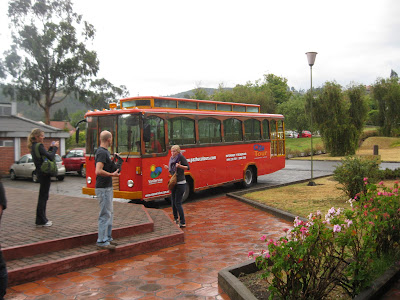 When we arrived at our destination, we were surprised by how beautiful the location was and how close it was to the city.  Cuenca, like many Latin American cities, tends to be pretty dense.  But once you leave the city, it’s striking how quickly the scenery turns from urban to rural.

As such, Cava Ron San Miguel can just about be reached by Cuenca’s public bus system for its proximity to town, but at the same time it is situated in a wide open estate with far more green space than building.

We were later told that the distillery takes its name from its location, which is on the former grounds of a beautiful old eponymous church, within sight of the building we toured.

As we got off the bus and walked into the dimly lit barrel house, the unmistakable aroma of rum immediately filled our noses.  A woman came to meet us and led us up to a platform with heavy wooden tables where we sat and watched an introductory video about the distillery.

From there, as our eyes adjusted to the darkness, we also caught our first glimpse of the many enormous barrels resting in the bodega below us. 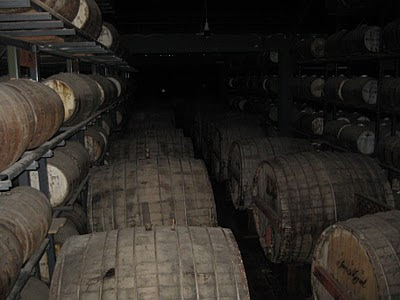 There they were, the 200 million liters of rum, aging in their oaken barrels.  Numbers that large are difficult for the human mind to truly conceive of.

As I tried at that earlier date to reckon with the idea of what that quantity of rum really looked like, the image came to mind of a sight not unlike this one, with big wooden casks stacked up and extending as far as the eye could see in any given direction.

The eye could see far less here, however, due to the low light.  As our guide explained, wood essentially breathes, permitting vapors to escape from the aging rum.  Hence the undeniably boozy smell as we entered the building.

And also the reason for the low lights.  Apparently stronger lights, among other things, run the risk of igniting the highly flammable gasses in the air and causing a massive explosion.

With such a thought in mind, so much rum resting in silence demands much more respect from the little people walking among it. 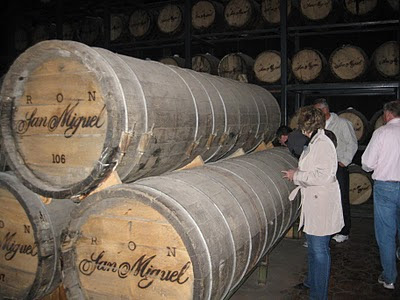 And walk among it we did.  The “cava” in Cava Ron San Miguel refers to the barrel house itself, a sort of cave if you will, where the rum sits in oak and takes on all the oaken characteristics in regards to color, flavor and aroma.

Prior to the aging process, the rum is a clear liquid, highly concentrated and not very palatable.  Sugar cane grows best in a tropical climate, and thus all the production of the rum takes place at lower elevations.  In the case of San Miguel rum, near the coast.  There, the cane is grown, the sweet liquid extracted, fermented, and distilled.

Once distilled down into high concentrations, it is transported up to Cuenca and its perennially cool climate.  Upon its arrival here, it is diluted with spring water and aged for about two years before being blended and bottled as a finished product.

Many Latin American countries have a geography and a climate perfectly suited for this paradigm of rum production.  Ecuador, like many surrounding nations, is hot along the coast and further inland, as the terrain rises up into mountains, it is met with cooler air.

Combine this with low latitude and you have year-round warm weather suited for cane production in one region, and nearby an equally predictable climate suited for aging.  Warmer, more humid temperatures would wreak havoc with liquor in oaken barrels, causing rotting of the wood and spoilage of its contents.  Conversely, cane grows poorly in Cuenca due to the cool weather.

Access to both climatic conditions within short distances of one another means that San Miguel can conveniently contract the production of cane along the coast.  Rather than shipping tons of raw sugar cane up the mountains, the distillation takes place near the coast as well, so that only the lighter and more compact unfinished rum needs to be transported.

A fine means of production, indeed.  And how about the finished product?  No tour of a storehouse full of rum would be complete without a sampling.

We were served.  None of us were shy about asking for seconds, nor in the case of some, thirds, nor fourths.  It was Friday afternoon, and it was raining outside.  And our noses had long ago been permeated with the smell of rum, beyond the saturation point.  What better conditions could you ask for to sip on San Miguel’s priciest imbibe?

Alcohol is a mysterious thing.  Throughout time and around the world, it has been devised from essentially anything sweet, and the people who appreciate it must cooperate with invisible natural forces, like yeast, for it to be made.  In so doing, we fundamentally transform something like sugar cane into something very different indeed.  The process is long and demands our time and patience, as though to temper our enthusiasm upon its consumption. 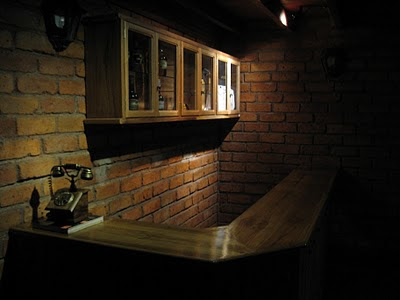 Perhaps as a result of this question of time, those who are responsible for producing rum and other alcoholic products often have a penchant for the antique, I’ve noticed.  San Miguel is no different.

The tasting room laid surrounded by beautifully well preserved relics from the past, like this classic wooden bar.  The kind you want to belly up to and enjoy a game of cards or a tall glass.  A person with a head full of rum vapor, seeing it empty, is led to wonder briefly over the permanence of the past, gone as it is and committed irrevocably to yesterday.

As our last glasses went bottoms up, we stepped once again into the brilliance of the outside world, more easily perceived as we emerged from the darkness by the fact that it was still cloudy and raining.  But that didn’t get us down, as we walked over to our final treat for the day, which consisted of bottles of San Miguel rum available at wholesale prices.

To give an indication of what we were drinking, the high end sample we took in the tasting room was available to us to buy at about $7 per bottle, which even at retail prices wouldn’t put it up on the same pedestal that some of the more famous rum might sit.

Nor will I be bringing a bottle on a plane someday, as I did with some of the finer mezcal I had sampled in Oaxaca.  But that day, I don’t think any of us left empty handed.

All in all, not a bad way to spend a rainy afternoon.  If people’s faces were any indication, I feel pretty good about my amateur attempt as an organizer of tours.  Maybe someday I’ll try it again.

One thing I’ve always been impressed by in Ecuador is that prices are set for the average working individual.  Of course there are places and events for the very rich, but for traveling and seeing many of the beautiful and interesting sides of this country, the cost is usually one attainable for local and tourist alike.

A tour at Cava Ron San Miguel, for example, is only $2 per person and our guide mentioned that she’s happy to lead families and small groups as well as larger organized tours.  Its location just outside the city means that even a taxi shouldn’t be much more than $5 more from most parts of Cuenca.  From our point of departure and back again, the tour took about 2 hours and left us home before dark, ready for whatever else Friday night had in store.  Cheers! 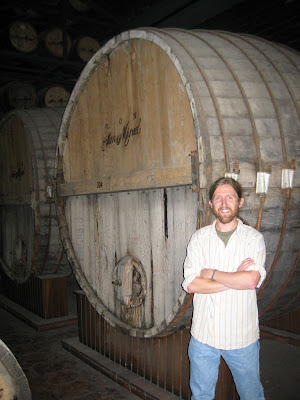 Brian Horstman is a teacher of English as well as a traveler, writer, photographer and cyclist. His interest in traveling around Latin America began while he was living in New Mexico, where he began to experience the Latino culture that lives on there. From there he spent time in Oaxaca, Mexico and has since been living in Cuenca, Ecuador and will be living in Chile starting in 2011. Cal's Travels chronicles some of his more memorable experiences from Mexico and Ecuador, as well as some side trips to other parts.
Read More Share
Yoav Andrew Leitersdorf on New Media & Venture Capital
The August Moon Is Here to Stay

2 Responses to Barrels of Rum in Cava Ron San Miguel