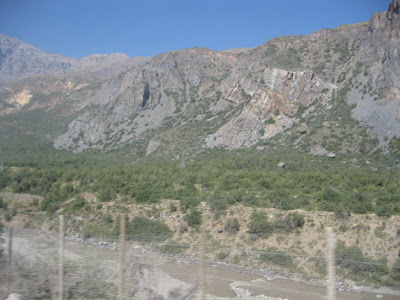 During our first months here in Chile, we had the opportunity to do some exploring outside the city of Santiago.  Rather than take long trips into the far-flung northern or southern regions of the country, we opted to stay close to home, venturing no further than two hour bus rides beyond the city limits.  One of the first destinations we chose was a set of hot springs to the southeast of Santiago through mountain pass known as Cajón de Maipo.  If my map is a good indicator, we were closer to Argentina than we were to Santiago by the time we reached our destination, heading up and up into terrain that to me began resembling the dry landscape of Nevada’s deserts, the further we went.  After more than an hour on a dirt road through a desert valley, I began to wonder if we were headed for a couple of pools in the sand with nothing else around.
We were on a morning bus whose only destination was the hot spring in question, full of other people, and with no return until 5pm that evening.  Would we be trapped under the sun all day in a hot pool filled with the several dozen other people on the bus?  As we bounced along the dusty road, our little day trip was starting to sound a little less pleasant than I had original imagined.  But with no way back until the evening, there was little more to do than enjoy the rugged scenery and wait to see how our destination would turn out. 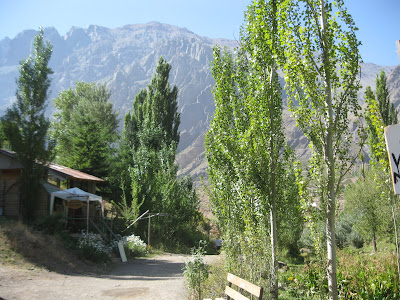 Eventually, the bus turned off of the main road and up into a smaller valley.  We came around a turn, and the otherwise barren landscape was interrupted by a veritable oasis in the desert.  This was Baños Morales, a tiny resort town sprouted up from the trickle of tourism coaxed from the city by a couple of little hot pools in the desert. 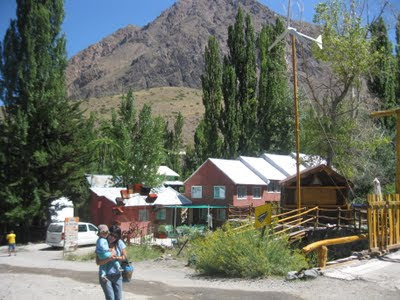 We got off the bus and began to explore this haven of wooden cabins and trees resembling the aspens of Northern New Mexico.  Upon closer investigation, the slender trees had thick, rubbery leaves adapted to retain moisture despite the high desert heat, wind, and lack of humidity.  Most of the cabins, predictably, were given over to tourism, each one advertising food, beer, lodging, tourist transport, or all of the above.  As we explored, however, we noticed a few houses which were nothing more than homes, probably the weekend or vacation homes of Santiaguinos seeking respite from their urban surroundings.
In addition, there were probably also at least a few full time residents, making a living in some capacity off of tourism or else living independently in homes that began reminding me yet again of New Mexico.  I couldn’t help but make a comparison with the little mining village-turned-art community of Madrid tucked away in the hills between Albuquerque and Santa Fe.  Beyond the unorthodox style and decorations of the various cabins, and the arid backdrop that both places have in common, they also share a connection with the mining industry.  Madrid originally sprang up from the desert due coal mining, and from the right vantage point, you can see an active gypsum mine in current operation in Baños Morales, if you care to look. 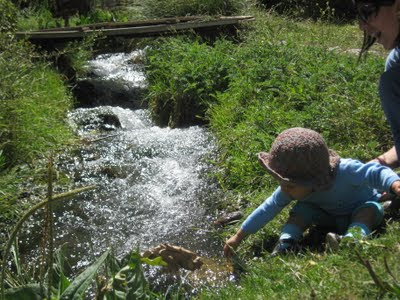 As we walked around, we soon discovered the source of the local verdure.  In addition to the town’s eponymous hot springs, a source of fresh water graces the hillside Baños Morales is perched upon.

It drives the whimsical waterwheel you can see over Nancy’s shoulder in the previous photo, and intrigues my daughter, who didn’t want to leave once she discovered it.  It also makes the town possible, gracing it with trees, green space, drinking water and gardens.  I found it incredible that from the desert could come such a gush of water, albeit a relatively small one.   Seeing the stark and nearly barren mountains standing over the valley, it seemed impossible for a stream to exist at all.

Until we walked further down the hill, and looked back up the valley: 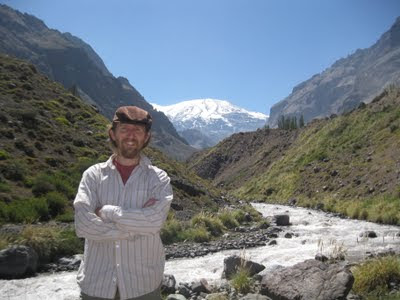 In the middle of the summer heat lies this beautiful glacier, atop an active volcano.  In a sort of environmental symbiosis, we find the glacier giving life to valley below it, and the volcano its mineral wealth.  Without either of them the hot springs of Baños Morales wouldn’t be possible.  Residents told us that fumaroles have been visible above its peak in recent years, and also that some pristine hot springs lie on the slopes of the volcano, existing in a much more natural state than the man-made pools and surrounding facilities to be found in the village.
We were destined for a mere day trip this time around, but that kind of information is all it takes to tempt me into the notion of a longer return.  An overnight stop in Baños Morales, followed by an early morning expedition to the volcano, some hot springs, and an up-close encounter with a glacier.  Or better yet, a night spent on the volcano itself, which, according to my limited studies of an area map, would appear to be designated a national park.  How does that sound to you? 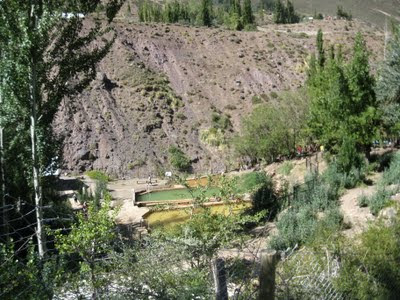 After so much talk about hot springs, I should probably show you the real Baños Morales.  Here they are, three multicolored pools in the morning sun.  We glimpsed them from above, shortly after our arrival in the village.  We decided, based on the lack of shade, that we would try back later in the day.  Later in the day, we didn’t get around to going back.  You might wonder why we would go all the way to a town famous for its hot springs and never get in the water.  Maybe it was the hot weather, or the less than crystal clear water.  My first hot spring experiences were in New Mexico, which has very nice, translucent pools to be found amongst the most beautiful of wilderness settings.  This type of wild setting, I’ve come to realize, is not always easy to come by.
Nonetheless, in Ecuador I learned to love the murky, steamy pools of Baños de Ambato, and other springs with pleasantly warm water, if not completely clear.  The pools of Baños Morales may be just as lovely, and someday, I might find out.  Or maybe I’ll go instead to those tantalizing waters closer to the Volcán San José.  In the meantime, we had a fine time just wandering around town, meeting the locals, and communing with the goats. 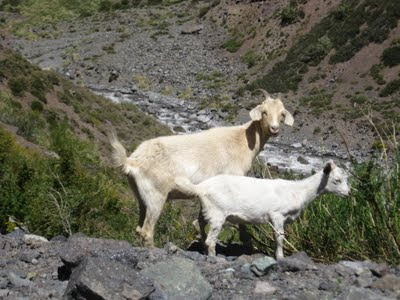 A Chilean goat, with her cabra chica.  These were two of the many goats to be found wandering around the upper reaches of Baños Morales. 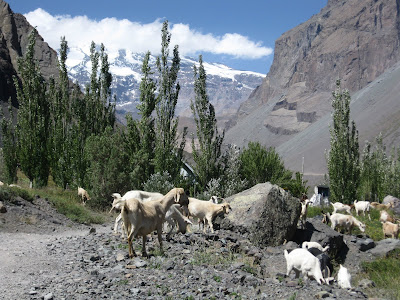 Didn’t I tell you?  That’s a lot of goats.   Goats belong in the mountains.  These aren’t really mountain goats, but they must feel a little closer to the essence of their nature with a glacial peak within sight of their foraging.  The dirt road that led us to them continued up the hill, and the name of the road, Calle Volcán San José, would suggest that it leads at least part of the way up to the mountain itself.  But we chose the goat sighting to be the limit of our wanderings for that day, as the hour of departure was starting to get closer.  We didn’t want to miss the bus, so we thought we’d hang around a little closer to where it would pick us up, for the rest of our stay. 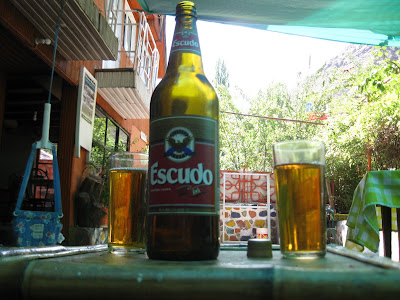 This also provided the perfect opportunity to relax in the shade on the patio of a nearby restaurant, and sample the cheap beer options of our new country of residence.  Escudo comes by the liter, and is, therefore, for sharing.  Chile has other cheap beer options, and even quite a few microbreweries, which was an exciting discovery for me.  On other occasions, I will doubtlessly explore such topics, for your consideration.  For now, I will go so far as to say that while Crystal is the ubiquitous draught beer to be found at any bar, Escudo is my personal favorite for an unassuming drink at home.  And when you’re on a patio of a restaurant far from the city and regular delivery of kegs, Escudo is what you drink to cool off after a long day of exploring a high desert town.
It wasn’t long before the bus came down the hill and all the people we rode up with began showing up, filing back on to the same vehicle that had taken us here in the morning.  In fact, as we walked around we noticed our bus parked behind a building not far from the foraging goats.  The driver was inside taking a nap, perhaps, or else enjoying the town like the rest of us.  And after a long day of ostensibly not doing much, he was now back to work, ready to take us on the two hour ride back to Santiago.  Not a bad day’s labor, hopefully he gets enough for it to pay the bills.
As for us, we were happy to have had a chance to get out of the city and into the Cordillera de los Andes for the first time, setting our sights on some of its iconic snowcapped mountains, and breathe some fresh alpine air.  Maybe we’ll get back there some day, or maybe we’ll be drawn deeper into the country’s more extreme reaches.  It’s hard to say.  Our time in Chile is just getting started. 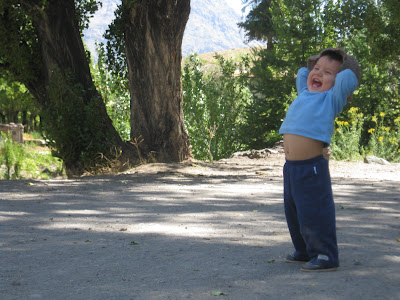 Brian Horstman is a teacher of English as well as a traveler, writer, photographer and cyclist. His interest in traveling around Latin America began while he was living in New Mexico, where he began to experience the Latino culture that lives on there. From there he spent time in Oaxaca, Mexico and has since been living in Cuenca, Ecuador and will be living in Chile starting in 2011. Cal's Travels chronicles some of his more memorable experiences from Mexico and Ecuador, as well as some side trips to other parts.
Read More Share
Summer in Whistler
San Francisco Giant: Carlos Beltran’s First At Bat As A Giant