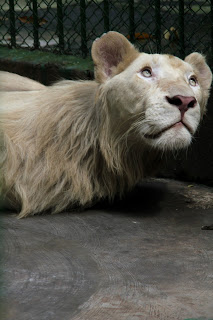 ”I dooooon’t care” screeched the shrill anglo-korean ”k-pop” tune as it reverberated across the lion cage in Saigon Zoo.
After leaping out of my skin at such a sudden noise I turned to see a teenager grinning maniacally whilst holding some kind of speaker contraption that looked like it had been stolen out of a car and doctored for this sole purpose. He held it right up to the cage in an effort to jolt the sun basking lion out of his slumber.
Sure enough like an inquisitive dog Mr Lion twitched his ears, opened his big blue eyes and stared right at the uninvited DJ in front of him.
For 5 minutes he sat bolt upright and I swear he was bobbing his head to the beat. I thought this odd little exchange summed up Saigon zoo perfectly, a bizarre mix of urban and exotic. Beautiful elephants and giraffes against backdrops of skyscrapers and lions chilling to some electro pop.
Only in Saigon! 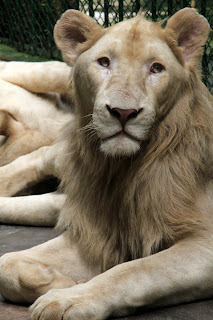 We enjoyed Saigon so much, we didn’t really want to leave but decided we should really see more of Vietnam and we got on a cheap flight to Nha Trang where we hoped to see the much talked about beaches and do some snorkelling around the bays (reputedly some of the best areas to do so in the country).
Unfortunately when we got there the rain was simply incessant. No breaks just constant rain, day and night. Not that I cared that much as my face had decided to swell to resemble the modern day elephant woman, with an agonising impacted infected wisdom tooth. Brilliant.
Now in Vietnam doctors are pretty much redundant to residents bar the most serious ailments, people just bowl up to a pharmacy and self medicate with no questions asked…whilst this may be marvellous for those of you who like to go down the k-hole all night, for me it resulted in some random antibiotics that made me look even more like a guilty golf ball cheek hoarder.
Luckily we were staying in the most amazing guesthouse with a lovely Vietnamese lady who bent over backwards to help. Cue Vietnamese dentist.

I looked up at the eyes above the Coca-Cola branded surgical face mask suspiciously. If the dentist had spoken English I would have asked “Erm why do you have a dentists in your front room…?’’ and ‘’is Coca-Cola paying you to wear that?’’ however I was limited to making ouch noises as she jabbed at my mouth indiscriminately. Any doubts I had about her were quickly removed when she charged a dollar as her fee …a DOLLAR! I think more UK dentists should wear sponsored masks and do ops in their lounges from now on.

The correct drugs bought, a day’s rest and face duly shrinking we ventured out in the treacherous rain for a mud bath in the natural hot springs in Thap ba.

It was a hilarious Benny Hill type day whereby Rick would get annoyed and complain about the cold and rain and the fact he was covered in sulphuric smelling mud and I would not be able to help screeching with laughter at his serious face that was coated in green and brown sticky stuff.

So he would throw more mud on me, I would get the hump because it was in my eyes and then he would laugh. More mud on his head. Cue Rick’s annoyance and so on and so forth. The Vietnamese staff looked at us like we had just escaped from a psychiatric ward. But the ensuing hot mineral bath and massage shower was so amazing that it quelled even us behaving like overgrown giggly children who had had too many ‘e’ numbers. After the Mud Fight…

Sara Damergi is a TV presenter, entrepreneur and globetrotter. TV clients include, MTV ,5IVE, Bravo, Sky and Channel 4. Sara also presented international extreme sports show, ''The Crunch'' filmed across China which was a prime-time success worldwide. Sara is of Lebanese and English descent and has always had a passion for new cultures and travel having lived in Beirut, Cyprus, London and in her clubbing heyday Ibiza, she is now indefinitely travelling the world funded from her internet businesses and blogging about it with her husband What Politz and Damage Did Next.
Read More Share
The Biggest Online Media Trends of 2010
The Garbanzos – Circus Family or Bean?