“S… Sara… Help…”
I dragged myself out of the surf as the waves washed me ashore. I staggered to my feet. My nose and my head throbbing as I tried to reach up with my right arm. It wouldn’t move. I looked down to see my shoulder hanging, lifeless from its socket. Disorientated I turned to see another wave crashing in. Finally turning and looking up, my eyes locked with Sara’s. Her face a picture of concern as I shuffled zombie-like towards her. I stopped and with the assistance of my one remaining good limb crunched my right shoulder back into place.
“AAAARRRRRGGHHHHHHHFFFFUUUCK!”
I collapsed to my knees as blood poured from my nose. Sara rushed towards me to usher me to safety.
Woah! Woah! Woah! Hold on now dear reader. We’re getting ahead of ourselves here. Let us rewind just a few short days so we can find out how we ended up in such a predicament on Mirissa Beach.
Now, one of the best things about getting a soul mate is that, despite all your flaws, despite all your little nuances, despite the fact that you spent the best part of a week moaning about staying in a hotel that they actually quite liked, despite all of that they still do everything they can to make sure you’re okay. Your happiness becomes their priority – and vice versa. If you haven’t yet got a soul-mate, a life-partner, they come strongly recommended. They come in all shapes and sizes so there really is no excuse. My soul mate (let’s call her Sara) has become a master at spotting a Politz Meltdown during our time together and unbeknownst to me, our stay at Helga’s Folly was the beginning of a meltdown. A really BIG meltdown.
As with all natural disasters we now have the technology to foresee danger before it happens. Certain measures can be taken so that once said disaster strikes casualties are minimal. As my mental state and patience wore increasingly thinner Sara hatched Plan B. Plan BEACH. After our stay in the hill country of Sri Lanka she knew exactly what we needed. Take one frustrated husband add some sun, sea and a dash of sand, cancel any plans for the immediate future and bake slowly until golden brown. We began our journey to Sri Lanka’s southern coast.
Our first stop was to Galle City, where the grass is green and the girls… well, they’re nothing to write home about. Galle is a lovely little town which is still riddled with the influence of its Dutch settlers from way back in 1663. The fort, which still remains today is the largest remaining fort in Asia and it is absolutely charming. Filled with cobbled streets, wooden shutter windows, cars with shiny bits on the side and people opting to take the bicycle as their preferred method of transport, at first glance you might think you had landed in a quaint little French village.
Another good thing about Galle and indeed the entire south coast of Sri Lanka is the abundance of sea turtles which clamber to the shores to lay their eggs. The arduous journey these incredible, prehistoric creatures make is simply unfathomable. Once the turtles hatch they travel thousands of miles out to see before making the journey back to the very same beach they were born. No Google maps, no sat nav. Remarkable.
Being a country of poverty there is a huge market for exporting sea turtles on the black market. Numbers are rapidly depleting but thankfully there’s a handful of people looking to make a difference by setting up turtle hatcheries. This prevents thief’s from scouring the beach and grabbing the unborn eggs and ensures the little turtles can continue on their life cycle uninterrupted. The wily owners fund their organisation by charging an entrance fee to tourists and you can even pay to release your own hatchling back into the sea. Nice. Although I do wonder if nobody pays, how long the baby turtles are kept in captivity? There’s a huge conflict of interest here and not the first we have experienced on our travels. Most involve animals in captivity or good causes which aren’t as selfless as they seem on the surface.
Pinnawela Elephant Orphanage is a shining example of this. A well established orphanage with acres and acres of space for the seemingly free roaming elephants to enjoy. The place is teeming with tourists all rejoicing in the animals freedom. Look a little closer and what you might notice that none of the elephants have their tusks and they all flinch when the keepers raise their hands. Better to be here than be hunted? That’s something I’ll let you mull over.
Finally we reached our beach paradise. Unawatuna, which might sound like a song from The Lion King but is in fact a rather lively beach town and of course Marissa. Of Latin origin meaning ‘of the sea’. My mind flooded with every cliché travel phrase that has ever been committed to paper. ‘Paradise’, ‘hidden gem’ I think at one point I even shoe-horned into conversation the term ‘best kept secret’. You know, all the big guns.
Within hours my anxiety and mood immediately mellowed. You could tell because instead of sitting in the hotel room moaning, I was in the sea, splashing! Look at me go! If I didn’t know any better I’d think I was bi-polar. I mean, let’s hope I’m not but it would explain the next couple of weeks. 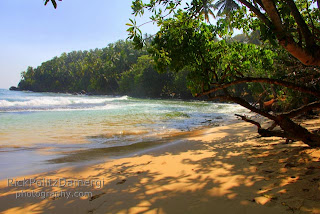 Sara and I laughed and joked together. We had swim races. I swam up behind her and pushed her up out of the water. We splashed each other with water until I got carried away and got salt water in her eyes. It was like the best 80’s film montage you have ever seen. Then, it happened. In retrospect it was inevitable. We had rekindled our game of surfing without an actual surfboard which we pioneered in Vietnam when Sara decided to head back to the beach.
“Just one more wave, bubs!”
What a fucking idiot. It’s not like I don’t watch films. I know the consequences of muttering the words, “Just one more…”.
Just one more drink results in you throwing up. Just one more cake results in life long obesity. Just one more wave results in a dislocated shoulder, a bloody nose and a bruised head.
As the wave came rolling over it dragged the seabed back, breathing the remaining water into its ever-expanding mass and exposing the sand below. I was on top of, what felt like at the time, the skyscraper of a wave before it crashed me into the beach and rolled me over. Like all near-death experiences (car crashes, falling backwards off of your chair in Geography) this happened in slow-motion and despite being under-water I felt and indeed heard every crunch as my nose slammed into the sand and my arm wrenched, twisted and separated as the wave rolled me over.
Just when I had found my mojo again I had it swept away in an instant.
The quickest mode of transport to the hospital was an exceptionally bumpy ride via a tuk-tuk which Sara, clad in a rather apt ‘Baywatch red’ bikini bundled me in to. When I say bundled, she was in fact very careful that I didn’t knock my arm but I just want you to know there was definitely a sense of urgency in her actions. We arrived at the hospital in double quick time. It was empty. The nurses were quick to spot me, after all I didn’t have time to go back up to the hotel room and was wearing just my board shorts, still dripping from my encounter with the sea. Looking at myself, if I was one of those nurses I would have made the exact same assumption they made too. It wasn’t just the nurses that asked. In fact every single person who enquired as to why my arm was in a sling over the coming weeks all asked the same thing;
“Did you crash your moped?”
Oh christ! I had become everything I despise, everything I loathe. I was a Brit, nay, I was an IDIOT abroad!
A couple of x-rays and a handful of some Matthew Perry endorsed Tramadol later and I was feeling rather droopy-eyed and euphoric in our hotel room. ‘Paradise’ just outside my window. Just out of reach. Just as soon as the painkillers wore off my mood returned. I was done with Sri Lanka. It was the first time since being away that I became frustrated. Travelling the world isn’t supposed to be hard work! I thought every country was a sure fire hit that I would unquestionably like and accept like the open-minded, free thinker that I am. Not to worry. I can put my problems with Sri Lanka aside because we were heading to India in a couple of days. Little did I know that the meltdown had not been averted… Just merely delayed.

Sara Damergi is a TV presenter, entrepreneur and globetrotter. TV clients include, MTV ,5IVE, Bravo, Sky and Channel 4. Sara also presented international extreme sports show, ''The Crunch'' filmed across China which was a prime-time success worldwide. Sara is of Lebanese and English descent and has always had a passion for new cultures and travel having lived in Beirut, Cyprus, London and in her clubbing heyday Ibiza, she is now indefinitely travelling the world funded from her internet businesses and blogging about it with her husband What Politz and Damage Did Next.
Read More Share
Attention Book Lovers: Visit the Taiwan Book Festival on April 23-24, 2011 at Huashan Culture Park!
Travel to Lebanon: Highlights, Tips, Cultural Nuances & Must Do’s