‘’Rent a boat madam?’’ cried choruses of boat touts dotted along the canals. We were in Kerala, India. Famed for its stunning olive green backwaters, Ayurvedic medicine and treatments. I was enjoying myself. In fact I was loving Kerala. We had spent the previous three days in Fort Cochin getting reacquainted with some delicious Indian cuisine , being massaged into oblivion, soaking in the culture and seeing a fantastic martial arts show where I kid you not, the martial artists fight with daggers, swords and scary objects that could slice you in half. In fact two of them were bleeding by the end of the show and I moved six seats back after a stray sword came hurtling through the air towards me.
The portly narrator assured us the injured need not worry as they had some Ayurvedic medicine to sort them out and that they didn’t use modern medicine at all. Even if someone broke their arm it was herbs and a bit of Mr Miyagi hand rubbing. He also insisted the audience stop wearing deodorant and rub some leaves under their armpits.  Despite the questionable personal hygiene advice It was truly incredible and reminiscent of a Bruce Lee fight scene . These guys need to be in the movies. 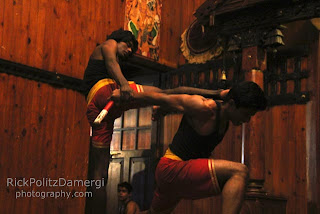 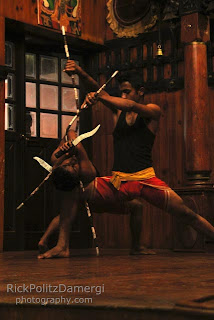 We had shacked up in a quaint travellers home-stay called ’Amshanti’. There was a huge, bamboo communal area that was littered with books, playing cards and likeminded, dreadlocked comrades. Perfect. Well, perfect for me, at this point Rick was almost at ’The Meltdown’ Stage 2. Despite my now borderline psychotic husband we had an awesome night with a Canadian hockey player who regaled us with tales of his time spent in opium dens in Indonesia. It transpired that his girlfriend had left him in a den for what felt to him like a few hours but when she finally dragged him out of there it had been five days!
“FIVE DAYS?” I said.
He shrugged, “But maaaan, they just make it so comfortable.” Right, yes, of course, nothing to do with the narcotics you were sucking into your lungs like Henry the Hoover then?
We were also joined by a young English chap known to us only as ‘Methadrone Man’. A bit of a celebrity on the Isle of Man who was dubbed said nickname by the press after being the first person arrested and charged for intent to supply ‘meow meow’ when it became criminalised. Unfortunately for him he was training to be a teacher and he is now waiting for his criminal record to be scratched to continue his dream, filling his time from what I could tell by sketching turtles and travelling the world on a pittance.
I felt really quite sorry for him. He was only twenty two but had the air of a forty year old. I came up with a business idea for him capitalising on the name ‘Meth Man’ and his UNBELIEVABLE worldwide pharmaceutical knowledge to create a website that informed people about legal highs. Ironically he was just about to set off to a spiritual detox retreat in Hampi. I like to think perhaps by now his head is together and he is sketching up the ‘Meth Man’ cartoon character as we speak. Watch this space.
The next day, bleary-eyed, our guesthouse owners whizzed us off on mopeds to the boat we had booked for our trip around the famed backwaters. Now how amazing is this? For around 50 dollars you can get yourself a boat with a chef for an overnight stay and look how pretty the boat is… 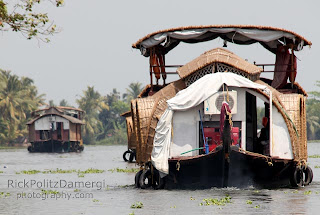 Kerala really lived up to the hype, the backwaters were ridiculously beautiful and I enjoyed taking photos of the villagers that lived and worked on the river, especially watching the locals running for the local boat which ferried them around to different villages. 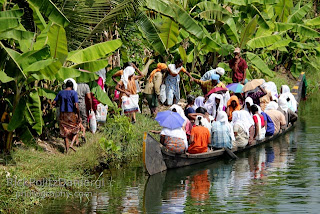 We spent the day meandering along gazing at the green waters, wildlife and lush fields that surrounded the rivers, reading books and ordering cool drinks. 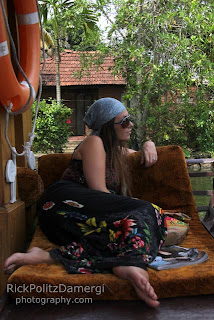 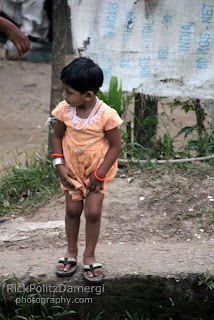 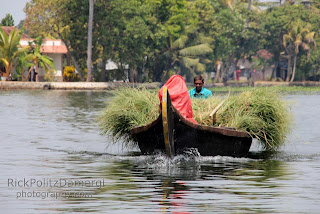 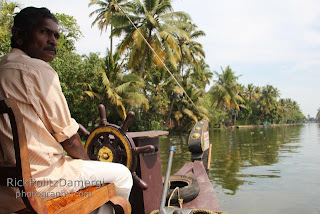 After a decent meal the decision to party the night before became a bad one. My confuddled, tired brain forgot to bring the mosquito repellent. My god, if you go to the Keralan backwaters don’t forget the repellent! We were besieged by swarms of the little buggers. Mozzies IN YOUR EARS is not fun. The next morning all was forgiven as the sun rose over the backwaters of Kerala and the local fisherman began their daily trade. I felt truly grateful to have experienced it.
There is a reason it regularly is talked about as a must see travel destination. If Kerala isn’t yet on your list of things to do before you die I recommend you scratch out sky dive and replace it with Kerala it really is an oasis of calm a world away from the hustle (and hustlers) of Dehli. Dusty busy roads become rivers and the whole community works and thrives around them. A totally different way of life for your eyes and ears a definite bucket list destination.

Sara Damergi is a TV presenter, entrepreneur and globetrotter. TV clients include, MTV ,5IVE, Bravo, Sky and Channel 4. Sara also presented international extreme sports show, ''The Crunch'' filmed across China which was a prime-time success worldwide. Sara is of Lebanese and English descent and has always had a passion for new cultures and travel having lived in Beirut, Cyprus, London and in her clubbing heyday Ibiza, she is now indefinitely travelling the world funded from her internet businesses and blogging about it with her husband What Politz and Damage Did Next.
Read More Share
Battle, Lam Son 719: Tchepone, Laos and the Hoh Chi Minh Trail
Live Today at Facebook, Zuckerberg Chats with President Obama