I’m a keen amateur photographer and rarely go anywhere without my camera to hand. Despite a deep-seeded love for my Canon 550d, there are times when it fights for attention with my humble little iPhone. Don’t get me wrong, the camera on the iPhone itself is terrible – however there are many apps available on iTunes which turn the decidedly average features of an iPhone 3Gs camera into an all singing, all dancing wonder camera that a high-spec DSLR could only dream of becoming.

One of those apps and by far my most used and favorite is Hipstamatic. A clever little application which lets you choose different lens and film combinations in order to recreate a retro ‘digital-analogue’ feel. The app itself is hugely popular with professional photographers and amateur snappers embracing the movement.
What has this got to do with you, I hear you cry?! Well – the folks over at www.Hipstamtics.com have got together with The Orange Dot Gallery in London to put together an exhibition of some of the best Hipstamatic shots they have gathered from various photographers the world over and three of my prints will be included. 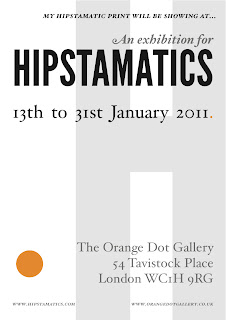 Suffice to say this is the first time I’ve exhibited anything to the public – save for a few rather questionable evenings in my youth – so if you find yourself in and around London from the 13th to the 31st January please do pop along and have a little look. For those of you that won’t be able to make due to other international commitments the prints that will be on exhibition are:
Rick Politz and Sara Damergi

Sara Damergi is a TV presenter, entrepreneur and globetrotter. TV clients include, MTV ,5IVE, Bravo, Sky and Channel 4. Sara also presented international extreme sports show, ''The Crunch'' filmed across China which was a prime-time success worldwide. Sara is of Lebanese and English descent and has always had a passion for new cultures and travel having lived in Beirut, Cyprus, London and in her clubbing heyday Ibiza, she is now indefinitely travelling the world funded from her internet businesses and blogging about it with her husband What Politz and Damage Did Next.
Read More Share
Food Riots Return as Global Food Prices Reach Record High
Avocado Sauce, Vegetables and Chicken Over Pasta Anyone?