I feel like I can talk about it now. A sufficient amount of time has gone by and enough water has passed under the bridge. In retrospect, it seemed a lot worse at the time – like most things of this nature. It’s one of those things nobody particularly likes but it’s inevitable to happen in one’s lifetime. Like a bad sexual episode which you try to desperately forget only to laugh about down the local with your friends’ mere months later. Fear not reader! This is not the tale of a marriage riddled with problems of the sexual variety. This is something far more sinister. For the last two weeks Sara and I have waged a two-person war on the scourge of primary schools across the world, the dreaded head lice!

My first experience with head lice was around the age of 8 when I was a pupil at the prestigious Thames View Junior School. I remember a letter was given out in assembly which we had to take home to our parents letting them know there was an outbreak of nits and that we should all be put into quarantine and such. It was quite a big deal at the time. We all had our theories as to who was the culprit – I personally thought it was a young lad called David Baker for no other reason than he had worn the same Ghostbusters jumper for the 3 days in a row. Sound detective work from a budding, juvenile sleuth I am sure you would agree. Now, even in the late eighties ridding your hair of lice was a relatively easy if not somewhat painful process using some kind of chemical shampoo. I vividly remember my dear mother standing me over the kitchen sink – we had a bathroom but I wasn’t allowed upstairs at risk of contaminating my sisters room – and lathering my hair in a nameless toxic concoction which I have no doubt is banned in the modern world. After treatment had taken place, which makes it sound like it should be carried out in a controlled environment like a hospital or laboratory and not a kitchen, over a sink, a wire (wire?!) comb was scraped through my hair in an effort the remove any eggs the chemical rinse may have left behind. Not a particularly pleasant experience even in ones formative years so imagine our distress when two full grown, real life adults went and found the little critters crawling all over our craniums.

We’ve scratched our heads (boom boom) for hours trying work out just where the unwelcome lodgers joined us on our journey. Was it on our flight from Saigon to Nha Trang? Maybe the questionable car seats of a random taxi ride? Perhaps they jumped ship whilst we were literally on a ship in Ha Long Bay? It was all inconsequential. They were here and they weren’t going anywhere.


After our self-diagnosis which involved sitting cross legged and rummaging through eachother’s hair in simian style fashion we went about finding something suitably toxic to remove our unwanted tenants. Unfortunately this isn’t 1989 and it isn’t the western world and such treatment isn’t readily available in Vietnam. Sure there are karaoke bars to be found on most roads, high-speed broadband and 5-star hotels but they are yet to find a dedicated treatment for a problem which has been around since the dawn of man. If I was making a country that would be the one of the first things on my list of things to sort. I mean what is the point in being able to download an entire series of 24 in just 3 hours if you’re scratching your head like an ape whilst watching it?

The trip to the pharmacy was eventful. After using the international sign language for shampoo and being presented with just that – shampoo we realise we would need to be a little bit more creative in our approach. So using our combined sign language expertise I again repeated ‘shampoo’ by frantically rubbing my ever-itching bonse and Sara used her hands to mimic a small creature running up her arm and then we both pointed to our hair in unison. The sweet young lady looked at us and our tattered manes of hair and put forward a brown bottle that would have looked out of place behind a cocktail bar.

The pharmacist was located in The Old Quarter of Hanoi, the capital of Vietnam where we found ourselves after the literal washout that was Nha Trang. Having spent some time in Ho Chi Minh City I found it a bit odd that Hanoi was the capital city of Vietnam. It’s a bit like going to London and then finding out that Hinckley is the actually the capital city. There is nothing wrong with is per sae but it was hardly the bustling hub of creativity and commerce that Saigon turned out to be.

Most of the streets in The Old Quarter where we were staying are named after the types of retailers found down said street. We did consider asking our hotel where we could find ‘Head Lice Shampoo Street’ but this was apparently a bit too specialist. Given our distinct lack of knowledge of the Vietnamese it was quite amusing to walk around aimlessly and discover the street names by sight. Some were obvious like, ‘Leather Street’ or ‘Food Street’ as for the not so obvious, we gave them our own names, ‘Moped Seat Road’ and ‘Fake Nike Air Force One Boulevard’ being particular favourites.


After sampling the delights of Hanoi City and finally reuniting with both my iPhone and Colonel Sanders in one glorious afternoon the next stop on our itinerary was the famed jewel of North Vietnam, Ha Long Bay.


As with most tourist attractions in any given country Ha Long Bay was busy. Very busy. Made to look even more busy by the fact that to get to Ha Long Bay to glimpse and marvel at the famous limestone rocks everyone is funnelled through the same port all queuing up for the same pier of which around 500 boats are all waiting their turn to pick up the latest shipment of freshly delivered tourists. Suffice to say the majesty was somewhat lacking as we departed. Once onboard everything changed. The nautical traffic dispersed and we glided through the lime green waters of the South China Sea sailing past entire communities of fishing villages and weaving in and out of the huge limestone formations piercing the tranquil jade ocean. Ironically it was moments like these that made our three day excursion what it was and not the advertised hotels/(rabid) monkey island/enigmatic cave tours we sampled en route.


After Ha Long Bay The Politz-Damergi Honeymoon Tour made a pit stop on Cat Ba Island where we took part in a bit of trekking. This was a first for both Sara and I and we were very much looking forward to it. I’m not entirely sure why, maybe it’s a coming-of-age thing? I am pretty sure it’s the same kind of excitement I get from purchasing a new camera rucksack which also has a little compartment for my net book. Those kind of things never did much for me until recent years and the idea of trekking never elicited any emotion before, so why now? – I fear we are becoming ‘outdoorsy people’. You know the type? They wear shoes for comfort and own more than one waterproof jacket. Anyway, being innocent little trekking virgins meant we were ill-equipped for such activities and so what should have been a relatively easy hour hike up and hour hike down the Cat Ba National Park peaks was made into a bit of a drama caused mainly by the same camera rucksack with little compartment for my net book which I insisted on carrying for our mini-mountain marathon. With only some tatty old Topman plimsolls for traction we eventually made it the summit gasping for air and relieved. A job well done. 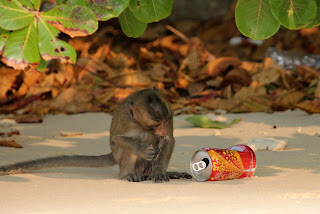 Feeling reinvigorated and with an unusual lust for ‘grown up’ activities we promptly booked a week in far North of Vietnam in a region called Sapa. This was hardcore trekking country – but we were ready. Armed to the teeth with boots from ‘We Stole These Shoes From Travellers Like You Street’ it was time to see what we were made of as we made our way off the beaten track and into the homes of the Lau Cai Village Tribe.

Sara Damergi is a TV presenter, entrepreneur and globetrotter. TV clients include, MTV ,5IVE, Bravo, Sky and Channel 4. Sara also presented international extreme sports show, ''The Crunch'' filmed across China which was a prime-time success worldwide. Sara is of Lebanese and English descent and has always had a passion for new cultures and travel having lived in Beirut, Cyprus, London and in her clubbing heyday Ibiza, she is now indefinitely travelling the world funded from her internet businesses and blogging about it with her husband What Politz and Damage Did Next.
Read More Share
India and Canada Shake Hands and Dance
Animal Testing: Very Much Alive