Jungle is definately massive. Jasmine Valley in Kep was set right in the heart of the Cambodian Jungle. The sounds were amazing like a rainforest meditation CD, Monkeys, crickets, birds, choruses of frogs the wind through the trees and early morning downpours of rain. Which we decided to have a shower in. There is something so magical about standing in a monsoon of warm rain in a bikini! 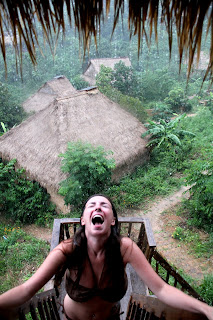 The Jungle being the Jungle was of course full of weird and wonderful creatures, One beautiful lime green and yellow snake managed to curl it’s way around the top steps of our treehouse and did a mad kamikaze 10 foot jump when it spotted me ambling elephant like up the steps.
After being told by one of the owners about centipides that could render you very very sick we of course had to bump into one half an hour later. It was pitch black and we only had my wind up torch that my grandad had told me would come in useful one christmas. Rick shone the torch on the ugliest fucker I had ever seen all red and black MASSIVE and with weird antennae flailing around trying to locate us which i perceived as a clear sign to use Rick as a human sheild. I was moving him left to right as it slithered in the same directions. Rick was shitting himself as much as me so wasn’t best impressed with my self preservation tactic and I got a panic stricken ear bashing. With that the centipede disappeared into the undergrowth. (Well have you heard Rick when he’s got the hump?)
Jasmine Valley tends to cook its jungle friends. Included on its menu bar snacks such as fried termites. Owen one of the charming owners reliably informed us it went ”great with an ankor beer” Frogs and lemongrass are a favourite although i nearly returned to being a veggie after taking pictures of a frog that joined us for a drink at the bar and promptly having a skinned one placed in front of me. I thought it resembled a female body builder without a head…
watcha reckon? 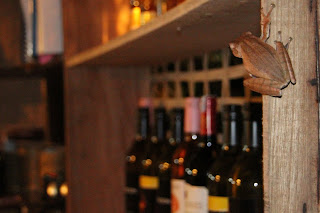 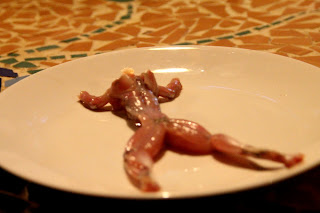 The Lovely Ram and Stannie joined us in Jasmine Valley on their way to their New Zealand pilgrimage for a night where Ram treated us to one of his songs on the Jasmine Valley Guitar and then the following morning we all headed for Rabbit Island, 40 minutes or so by boat from Kep.
We spent a few blissful days on the rustic beach going back to total basics with electricity only for 4 hours a night, and a bucket and tap as a shower. The only terrifying moment was when my mum rang to say there was a tsunami 400 hundred miles away so stay up high. I assured her we were and everything was fine. (in reality we were 2 metres from the sea on a tiny island) As I hung up the phone the wind picked up and a mental storm started. Shaking the huts we were staying in, causing the rain to pour through the roof and the mosquito net. Needless to say I didn’t get much sleep and spent the night planning an escape route and worrying about the best way to transport a broken toed Ram with speed away from a Tsunami. Ricks advice of ‘Go to sleep it’s just a storm u donut” turned out to be correct. 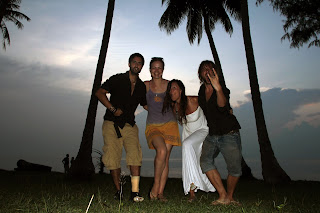 We said our goodbyes to Ram and Stannie leaving them to enjoy another night in Jasmine Valley and made our way back to Sihanoukville to see the Politz clan once more before we set sail for Vietnam. We spent a lovely day with Papa Politz and the kids on Occheautual Beach basking in the sun, having a banana boat ride and eating pizza – a perfect day to say goodbye. We also went to the pub with Papa Politz , he had me in stitches with his tales of ex girlfriends with piles and god knows what else so we all stumbled home happy.

Sara Damergi is a TV presenter, entrepreneur and globetrotter. TV clients include, MTV ,5IVE, Bravo, Sky and Channel 4. Sara also presented international extreme sports show, ''The Crunch'' filmed across China which was a prime-time success worldwide. Sara is of Lebanese and English descent and has always had a passion for new cultures and travel having lived in Beirut, Cyprus, London and in her clubbing heyday Ibiza, she is now indefinitely travelling the world funded from her internet businesses and blogging about it with her husband What Politz and Damage Did Next.
Read More Share
GotPot Anyone?
Ensuring Food Security in Africa, Through Agricultural Research