I’ve completely given myself to Taiwanese food and snacks.  I can’t help it.  There’s something about Taiwanese food that just grabs me.  So, even though I’m not much of a cook, I still like to look at Taiwan Duck.
Taiwan Duck is a website that shows you how to prepare many favorite Taiwanese foods.  They give you a recipe, and the steps to make it, then as an added bonus, they do a video where Joanne shows you how she prepares it. 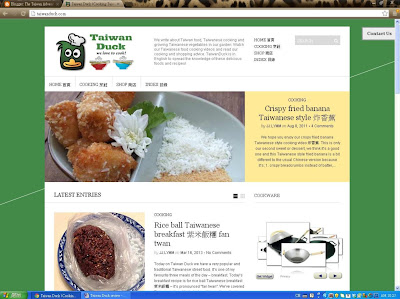 Joanne is cool; she’s a Taiwanese woman who has been transplanted into the UK, by marriage.  She’s obviously a very good cook, and has quite a charming personality.  I don’t even cook, but my wife and I enjoy watching her videos and listening to her explanations of how to do it.  Sometimes as I watch the video, I can just imagine the delicious smells in that kitchen.
She will also tell you where you can find ingredients, usually found only in Taiwan, in the area where they live.  She tells you her secrets for preparing the food and shows you how it’s done.  At the end of the video she shows you the prepared food and those are the only times I wish that I lived in the UK, so she and her videographer husband, could invite me over to help them eat it.
Her husband stays mostly in the background.  I can’t remember ever seeing him in any of the videos I’ve watched.  Occasionally, he’ll prompt with an English word or two, but mostly he just hides behind the camera.  I suspect, all though I don’t know for sure, that he writes all of the recipe descriptions and is the tech guy for the website. 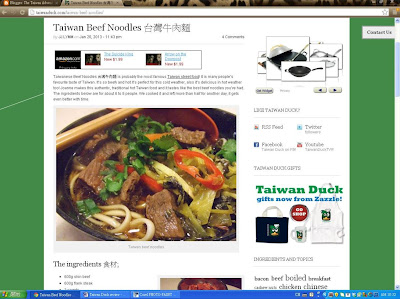 The recipes are varied from Taiwanese snack foods: Oyster Omelets, Salty Chicken (Yen Si Ji), Taiwanese Beef Noodles (Niu Rou Mian) to Beef and Spinach Lasagna.  Lasagna?  Well, apparently not all of the recipes are Taiwanese, but with a name like Banducci, I can eat some Lasagna, too.
The website is easy to use, and really an enjoyable experience.  You can even slip over to the store and buy some nice Taiwan Duck apparel, so you’ll look good in the kitchen.So, if you have some time and want to  learn how to cook some of Taiwan’s favorites, then take a few moments, grabs some nice Taiwanese Oolong Tea and a notebook and learn how to cook Taiwan Duck Style…then call me up and invite me over to help you try out the meal you made.  I can tell you right now, without equivocating I’m going to like it.
Chris Banducci

Chris Banducci is a pastor and missionary in Taiwan. He has, at other times of his life, been a white-water rafter, rock climber and adventurer. He left the corporate world of Solid Waste Recycling in 1996 and went into full-time ministry, where he pioneered a church in Riverside, California for the Potter’s House Christian Fellowship and is now engaged in the same endeavor in Taoyuan City, Taiwan. He writes on the culture, religion, tradition, and day-to-day life in Taiwan. Twenty-six years of living with Muscular Dystrophy may have weakened his muscles but not his spirit.
Read More Share
Olloclip, a Great iPhone 3 Lens Photo Solution for People On the Go
Tips on Flying Pets From the States to West Africa