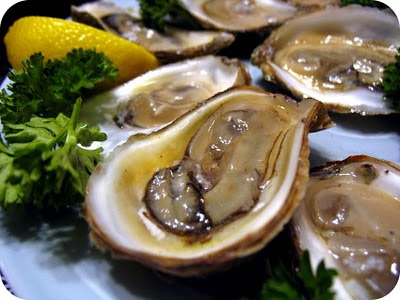 In the Idol Drama, “Corner with Love,” Alan “Show” Luo is a starving artist.  He has moved to Shang Hai to pursue a career as an artist.
But while he’s there he makes the restaurant a huge success by cooking a popular night food market snack, the Oyster Omelets.  He is trying to raise the money for a ticket back to Taiwan where he left his grandmother, the best Oyster Omelet cook in all of Taipei.
Along the way, he meets a beautiful heiress, played by Barbie Xu (Da S), whose parents find themselves bankrupt and disappear into hiding leaving Barbie to fend for herself. She moves to Taiwan. And then, it’s one of those stories can can imagine. Flowers, rainbows and betrayal.
I used to watch this show. As I watched I got more and more interested.  Not in the drama itself, but in Oyster Omelets.  You know I talk to people and they call themselves foodies. Like most foodies, I love foodies.
My favorite way to eat an oyster is to suck it off the half shell, with lime juice and hot sauce. I also like them smoked, steamed and fried.

After three years in Taiwan, I finally made it to the Taoyuan Night Makret and tried the most famous Oyster Omelets in all of Taoyuan City.

The Oyster Omelets is made with a number of ingredients:  Eggs, of course and oysters, and rice flour and a leafy vegetable.

On top of the omelets they put two types of sauce, one is a red sauce made of catsup and sweet chili sauce.

Chris Banducci is a pastor and missionary in Taiwan. He has, at other times of his life, been a white-water rafter, rock climber and adventurer. He left the corporate world of Solid Waste Recycling in 1996 and went into full-time ministry, where he pioneered a church in Riverside, California for the Potter’s House Christian Fellowship and is now engaged in the same endeavor in Taoyuan City, Taiwan. He writes on the culture, religion, tradition, and day-to-day life in Taiwan. Twenty-six years of living with Muscular Dystrophy may have weakened his muscles but not his spirit.
Read More Share
North Dakota’s Enchanted Highway
Floating Among Palazzos on the Canals of Venice