Sara’s old flatmate Michelle: ‘’Babes we need milk, shall I go to the corner shop?’’ Sara (magnanimously): ‘’No it’s ok I will go.’’
Sara gets in her car and drives the 2 minute walk to the corner shop, the act of getting in, starting up and parking the car twice, obviously taking infinitely longer than the short walk would have done…
So that was me, a lazy, round, Marlboro light puffing city girl… apart from 3 guilt assuaging gym visits a week and burning up dance floors at local London dives, exercise wasn’t even on my radar. So how on earth did I now find myself championing a 4 day trek through the mountains of Sapa to stay with hill tribes? I think perhaps the idea of adventure or perhaps I didn’t think about the “trekking bit” and got lost in the romance of doing a ‘’Bruce Parry’’ Either way we signed on the dotted line…
We returned from deciding on our trekking expedition flushed with excitement only to look at our feet with dismay… Some black chained and sequin studded Diesel trainers and some Topman ‘George Lamb-esque’ plimsoles. ‘’Well, we are just going to have to get hiking boots, Rick.’’ I declared.
I watched his crestfallen face above his carefully crafted fashion ensemble. He nodded sombrely.
Now, I once presented an adventure-racing extreme sports show, which I SLIGHTLY exaggerated my physical prowess and love for mountain climbing to get, I went through the same drama as Rick did breaking the invisible wall of fashonista conditioning and purchasing my first set of hiking boots… AND buying trousers that were a bit too long so they may pass as trainers if you looked at them squinty eyed.
We trawled through about 30 shops in Hanoi looking for Ricks hiking boots, in this time he tried to convince himself and me he could wear some Nike Air Force ones quite happily as trekking attire. However I feeling experienced in this area refused such mad suggestions as psychological resistance. It was like a therapy session and I did feel rather triumphant when we found some suitable boots and he resigned himself to his fate.
We arrived in beautiful Sapa on the overnight train which was surprisingly comfy and a pleasant change from the overnight buses with metal prison beds that throw you into the poles that are cleverly designed to be positioned at head level. 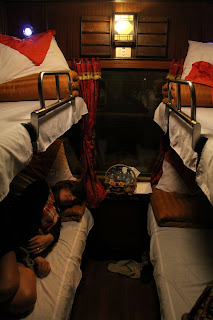 Catching some zzzz’s on the Sapa Overnight Train.
Sapa is simply beautiful, incredible mountains shrouded in white clouds, cosy cafes serving hot chocolate and tribeswoman selling their wares on the street – all very Christmassy and pretty.
The first village we visited before our main trek was Cat Cat. An incredible waterfall greets you after a long descent on stone steps. Cat Cat villagers sell handicrafts in self-styled bamboo stalls and there is the stunning Fairy Stream which I am sure some of my ex-psychic TV colleagues would appreciate. I didn’t see any fairies but a beautiful golden butterfly landed on my leg and I wondered if the legend originated from the presence of these sparkly creatures. 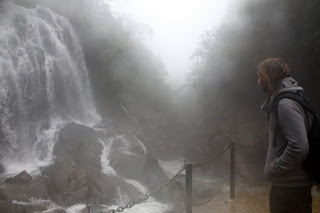 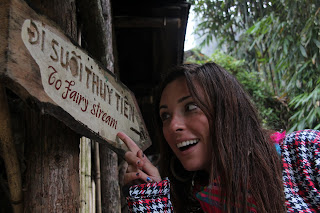 
We stopped for a sit down in the company of Dog Marley, the bizarre dog with a freak dreadlock tail. We were given some apple wine which we were assured was totally non-alcoholic, after sipping it we choked and looked at each other with pink flushed cheeks… non alcoholic??? Blimey. 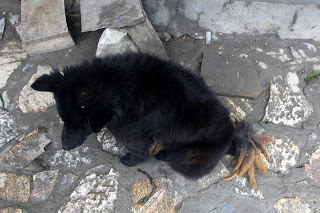 Dog Marley…
Maybe it was the ‘’non-alcoholic’’ apple wine or the knowledge that tomorrow we were going to be hardcore trekkers that propelled us to start our long discovery walk through Cat Cat. Rick decided to lead us up a treacherous muddy hill, he pointed at the map and said confidently.
‘’THIS is the path out Sara!’’
So we clambered and slipped up to be greeting by a ramshackle house.
‘’Rick I really don’t think it is the path.’’ I gasped clutching at a tree and pulling myself to it to let 4 goats past. He rolled his eyes and marched ahead towards the house, only to come running back after being chased by guard dogs. I promptly fell on my arse a few minutes later and refused to go up any other supposed paths unless concrete was involved. 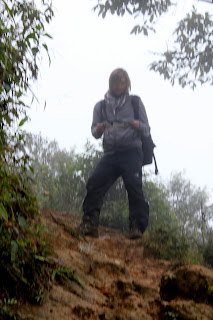 Ricks map-reading skills…
The next day a local villager girl called Lam met us at our hotel to start our trek, we were followed by two lovely ladies and their children whose aim, unknown to us at the time, was to make friends with us and then sell us as many things as they could. After seeing how tough these women are and the poverty some of them live in you couldn’t knock them for it. In fact it made the journey much more fun! Rick’s amazing photo of our villager companions.
Lam told me in no uncertain terms at the top of a steep descent that I wouldn’t need the bamboo walking stick the children were selling. Rick, safe in the knowledge yesterday had brought him went and bought me one anyway. That stick was a godsend. We discovered we weren’t trekking – so much as mountaineering. I watched at least 3 people slip over in 2 foot mud. The descents were slippery and steep as were the ascents but the rewards were well worth the effort. Incredible views of rice paddies, village schools and the minority villager’s way of life. Interacting with the locals was incredible. Lam took us to see her parents home. I have to say that I was shocked at the level of poverty they lived in. The house was like a stable covered in cobwebs and earth. The kitchen area was a few big bowls and a fire and the bedroom was a bed in the ‘kitchen’ everywhere you looked rice bags were being stored in case of a shortage. Certainly jolts you into an uncomfortable sense of being an over privileged fat cat.
We walked through 3 different villages that day with 3 different cultures, dialects and traditional clothing; we kept picking up new villagers looking to make a dong on the way…! We finally reached our home stay village where we decided to pay villagers for photos rather than buy more earrings, bracelets or trinkets we didn’t need to add to our every bulging backpacks. The family we were staying with were very welcoming a mother and her son fussed around us making us tea and cooking us delicious food. We had a real laugh with the village women before they left, taking their photos and Lam translating for me the ladies problems in their marriages, not so different to the UK really, her husband goes out and drinks too much spends all their money so they row all the time! We also discovered that the large red marks on some of the women’s foreheads were due to a fire stoked ox horn burn which is rumoured to get rid of headaches. I think I will stick to Nurofen thanks! 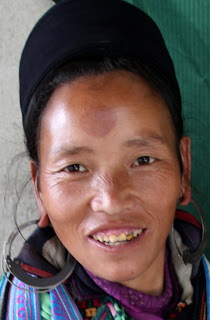 An advert for Nurofen 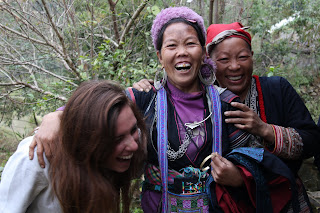 Gossiping about their hubbies!
In the evening we ate well and our host mother whacked on a leather jacket (looked interesting with her traditional pink headdress) and thrust a bottle of rice wine at us with a load of shot glasses. Lam assured us again, it wasn’t alcoholic… what is it with these minority tribes-people… it was DEFINATELY alcoholic. We were all screaming with laughter within minutes and making speeches about being welcomed into the family home. An absolutely hilarious night hosted by an amazing family. 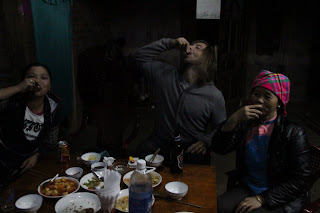 Rick partying hill-tribe stylee
The next day despite aching from our 7-hour trek the previous day we were keen to get going. After a few hours Rick started to turn a whiter shade of pale and despite me asking if he felt ok insisted he was fine. Another hour passed and he was projectile vomiting on the side of the road, poor thing had caught a bug and had been trying to carry on regardless. This impromptu vom session was punctuated by Lam offering to feed him more food which wasn’t met by much enthusiasm for some reason…
We called a taxi and bundled him up to take back to the hotel. Despite the trip being cut short… and me poor hubby being ill for three days, it was a truly magical experience and one of the highlights of Vietnam.
Lam said something to me before we went, “These people here have nothing Sara, a few animals a wooden shack, but they have their family and friends and they are sooo happy here. So so happy, sometimes I have western people come on these treks they have money, but are so sad.”
Says it all really doesn’t it?

Sara Damergi is a TV presenter, entrepreneur and globetrotter. TV clients include, MTV ,5IVE, Bravo, Sky and Channel 4. Sara also presented international extreme sports show, ''The Crunch'' filmed across China which was a prime-time success worldwide. Sara is of Lebanese and English descent and has always had a passion for new cultures and travel having lived in Beirut, Cyprus, London and in her clubbing heyday Ibiza, she is now indefinitely travelling the world funded from her internet businesses and blogging about it with her husband What Politz and Damage Did Next.
Read More Share
Why Japanese People Love Autumn Leaves
What Are The Kiva Alums Doing Now?