Social media surely wins elections in the US. Barack Obama is two for two on the back of Twitter, Facebook and Instagram (well, Instagram was a new addition to the Obama campaign’s 2012 arsenal). But can it do the same in a country of 22 million, where voting is compulsory? Australian Prime Minister Julia Gillard (think Obama) is campaigning to hold onto her seat against the leader of the opposition Tony Abbott (think George W. Bush). But the similarities don’t end there. Many Australians do not like Gillard, for reasons they find hard to articulate, fairly similar to the Obama haters. Deep-seated prejudice is most likely at the core of both groups (anti-women, anti-black), but in the 21st century it is terribly uncool to be either of those things.

Enter social media to help us sort it out. While Americans got reality broken down for us with a series of memes that showed Obama as a forward-thinking progressive (he supports public television, women’s rights and understands you’ll never achieve world peace with militia riding roughshod on horseback), Australians are a bit more of a direct lot.

Witness the tweet making the rounds that spells it out for Aussie voters, who by the way, if they don’t like what’s on their plate can vote for third-party candidates or simply mark their ballots with an “X”. As long as you show up and be counted. 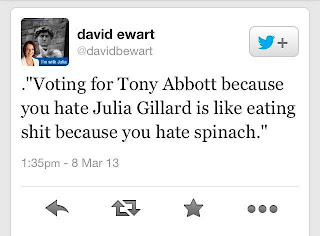 The election is five months away. Which gives this campaign a distinctly American feel as far as endurance goes. Australians are used to much shorter election cycles and will have to eat their spinach to keep up with this one.

For a more thoughtful look at the campaign (so far) and the accomplishments of Gillard, Australia’s first female prime minister, read “A Fair Go for Prime Minister Julia Gillard.” For something on the lighter side, visit the Tumblr blog “Julia Gillard’s Shoe.”

An accomplished digital photographer, her photos have appeared in 7x7 Magazine, the San Francisco Chronicle and Google Schmap.
Read More Share
India’s Rajasthan: From Tales & Culture to Camels & Color
Reflecting in a Tel Aviv Cafe on Taking Time to Listen for the Silence