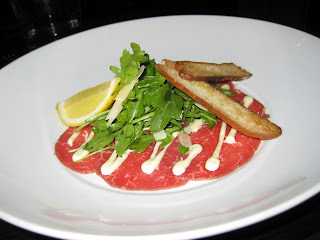 A couple of months ago there seemed to be a mini-backlash against us amateur mobile food photo junkies taking pics of our meals. This wasn’t just at your classy carpaccio-serving joints (pictured at the left), it even happened at a McDonalds!

Prior to the mini-anti-food-photo revolution-that-wasn’t, I had already been questioning my need to take pictures of my food. Was it caused by some childhood Christina Crawford clean-your-plate edict now manifesting in I’m an adult with a camera inside my phone rebelliousness? A need to document eating at some really good restaurants? (But then how do you explain 45 shots of some nachos made at home?) Or just finding food beautiful, like others gorge on landscapes, flowers or babies (or babes)?

I’m guessing that when it comes to taking photos of your food there is no right or wrong (unless your flash is going off in someone’s face while they’re trying to eat). It most definitely can be annoying, not only to the diner who is being harassed by your flash, but also to your dining companions, especially when you won’t let them touch their food until you’re finished with your photo essay. (The carpaccio shown above was not mine.)

Yet taking photos of our food has become a part of our online culture. Like the shopper on his cell phone at the supermarket, the baby with an iPad, the noncommittal responses we get (and give) via a text message or to a Facebook invite rather than just saying “No.” In the case of taking photos of your food however, someone can actually benefit from this annoying behavior. The restaurants. After all, your photo of their food on Yelp! or FourSquare is free advertising. Even an empty plate can speak volumes.

An accomplished digital photographer, her photos have appeared in 7x7 Magazine, the San Francisco Chronicle and Google Schmap.
Read More Share
The Traditional Swiss St. Moritz Grand Hotel Des Bains
Style Up With a WOODCHUCK Skin On a Beats by Dre Headset