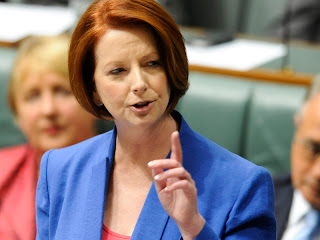 Australian Prime Minister Julia Gillard said what was on her mind the other day. And wow, did she make it clear how tired she is of the sexism and misogyny she encounters on a daily basis from the leader of the opposition party Tony Abbott.

In a blistering, now viral 15 minute video attack, Gillard called out Abbott on years of anti-women comments and actions, including standing with protestors carrying signs calling her a “man’s bitch”.

The smackdown came about when Abbott demanded Gillard seek the resignation of her Speaker of the House for allegedly sending crude text messages to a staffer referring to female genitalia as a popular shellfish best served with frites and a cold glass of white wine.

No problem, consider it done (the Speaker has since resigned). But what Gillard objected to was Abbott, who has a career rap sheet full of sexist and misogynistic comments of his own, lecturing her on aiding and abetting sexism and misogyny. The hypocrisy meter just imploded.

Said Gillard, “I will not be lectured about sexism and misogyny by this man,”

She then, according to Jezebel.com, proceeded to rip Abbott a “new one” – for 15 minutes! A painfully long time….

A few zingers include:

“If he [Abbott] wants to know what misogyny looks like in modern Australia he doesn’t need a motion in the house of Representatives, he needs a mirror.”

The most damning accusations meanwhile, were backed up with facts.

Comparisons are already being drawn between Gillard and President Barack Obama, who has taken the same level of daily abuse over his skin color, although Americans surprisingly are too polite to say what we really mean.

A loud minority (i.e., the Tea Party) has spent the past four years carrying signs calling Obama a “Muslim” and/or claiming he was born in Kenya, when what’s really on their mind is that they don’t like living in a country where a black man is in charge. Whereas Australia has been grappling with sexism and misogyny for centuries – long before they elected their first female Prime Minister in Gillard, America continues to grapple with racism too long after Barack Obama has been our president.

Kudos to Australia (or at least half of it) for standing up and confronting their issue head on. Now it’s time for us to do the same.