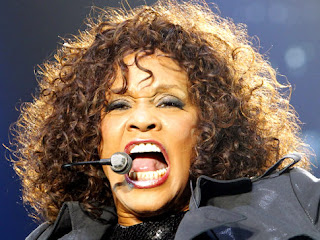 When you came on the scene in the mid-’80s with that eponymously titled debut album I bought it in vinyl. A year later, my jazzercise class was still working it. You were huge. And even though my musical tastes had moved on by the time The Bodyguard was a hit film, and that annoying song you sang is still playing in a bank or a Walgreens somewhere every day, I didn’t hold it against you.

I read the tabloid headlines at the supermarket about your marital troubles with Bobby Brown and then your various drug problems and the repeated denials that you were gay (honey, didn’t you know you’ve truly made it when the gay and lesbian rumors start swirling?). Oh well. As life switched over from vinyl albums, supermarket tabloid headline grazing and video store rentals of Waiting to Exhale and the Preacher’s Wife to the more fast-paced world of iTunes, YouTube downloads and tweets, I guess I lost track.

Once again, it’s no surprise that a major news story breaks first on Twitter. Apparently, your tragic demise in a Hollywood bathtub broke over the Twitterverse a full 27 minutes before it was reported by the Associated Press. Mashable.com has dug even further into Twitter archives (yes, anything that happened more than an hour ago is considered an archive in this fast-paced social media society we inhabit) to find an even earlier tweet. That tweet gives us a shred of hope that maybe your death won’t be determined to be merely another pop star OD. Maybe you really did accidentally slip and fall into the bathtub.