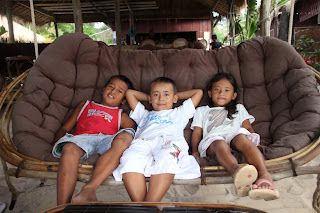 Reesa and Low are two orphans that live in Papa Politzs’ rather grand abode on the top of Victory Hill along with Rick’s gorgeous 6 year old half brother Sarick. What strikes me about the kids here is the absolute freedom that is impossible to achieve in England.

Rather than days spent inside playing computer games and parents fearful of letting their kids off the leash being constantly monitored and restricted days are spent playing at the beach, swimming in the ocean, running to greet neighbours, playing with baby snakes (yes baby snakes……

We had a baby snake thrust in our face today by a 6 year old, luckily he has now escaped back to the jungle to be with his probably rather terrifying python mother.)

Cambodia has a sense of community and family that I think we have lost in the West; I am always struck by the same sentiment when I stay in Beirut. 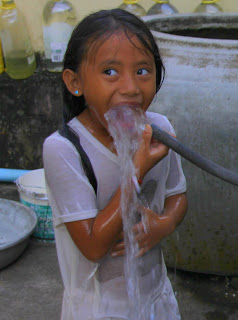 Victory Hill in Cambodia for the most part is a beautiful, relaxing and tranquil backpacker’s haven. The only downside being the newly redeveloped area which is like walking into a Bangkok sex district, but worse because business is much better in Thailand for the ‘ol jiggy jiggy trade so the girls and ladyboy’s are viciously vying for cash. We sat and had a coffee and watched the sweaty ex pats all in their 60’s and 70’s enjoy the power their money status gave them one moustached monstrosity kept waving around his dollars and sniffing them. Hot.

Today we got back to working on the businesses, I feel so blessed, a year ago I set a goal of doing exactly what I am doing now, travelling and having a business on wheels…Its mad how little synchronicities fall into place and how things work out in’t it?

In a few days we are off to visit a remote island off Cambodia… In the back of both our minds is the idea that one day we will find “our beach” and settle down… perhaps.

Sara Damergi is a TV presenter, entrepreneur and globetrotter. TV clients include, MTV ,5IVE, Bravo, Sky and Channel 4. Sara also presented international extreme sports show, ''The Crunch'' filmed across China which was a prime-time success worldwide. Sara is of Lebanese and English descent and has always had a passion for new cultures and travel having lived in Beirut, Cyprus, London and in her clubbing heyday Ibiza, she is now indefinitely travelling the world funded from her internet businesses and blogging about it with her husband What Politz and Damage Did Next.
Read More Share
10 Things to Know Before You Move to Central or South America
Crichton on Traveling: He Nails It