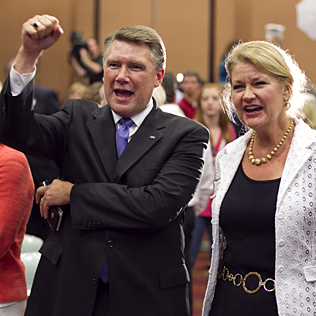 It was doubtful from the get-go that the passage of the hateful Amendment One in North Carolina was going to make headlines for a whole day. Amendment One, for those of you who missed Tuesday, is the one that had bigots so twisted in knots about denying gays and lesbians the right to wed that they successfully banned any and all protections for any type of relationship other than that sealed in holy matrimony between one man and one woman.

So, it was merely a cherry on top of what was pretty much already known that just 18 hours after the bigots claimed victory President Obama came out on national TV for gay marriage. The segment, an interview with the President by ABC news correspondent Robin Roberts, was not meant to air until 10 pm Eastern time Wednesday night, but it broke with viral videos almost immediately upon completion of taping on Wednesday afternoon.

While the President has claimed to be “evolving” on his beliefs about marriage for the past four years, everyone knows that was just political double-talk for “I don’t give a rat’s ass who gets married, but….” The “but” in the room was always bigger than the rat’s ass, until yesterday.

Photo caption and credit: Charlotte Pastor Mark Harris and Cindy Marrelli of Raleigh celebrate the passage of the N.C. marriage amendment during an election night party at the North Raleigh Hilton. Courtesy of Charlotte Observer.

This story originally appeared on OpenSalon.com.