So the weather conspired against us and Sihanoukville suddenly became besieged by torrents of rain. We decided to put our island visit on hold and start our journey towards Angkor Wat one of the eight wonders of the world. Its a gruelling 12 hour journey North so we thought we would cut it in two and stop off in Phnom Penh.
The coach journey provided much hilarity when I realised lots of the full blast Cambodian pop music they were playing had the lyrics “‘George Lamb” in them. God knows what it means, we think George Lamb may be some cult Cambodian figurehead. Perhaps Cambodians meet on a Tuesday dress in skinny rolled up jeans and say ”uuuuh?” after every sentence. We shall investigate and report back.
Hostelworld.com provided us with a perfect little hostel for the one night stay called ”Sweet Home” however it did remind me of that hostel in the beginning of ‘The Beach” with stark walls and bars on the window, I was hoping for some drug addict dramas, but instead we got some very sweet Cambodian hospitality. There are no bills in ”Sweet Home” but there are booklets where you write down what you eat or drink with a note in the front saying ”We believe in God” Perfect for a karma head like me… but bollocks business sense.
Phnom Penh was a fleeting visit to an evidently more affluent and savvy part of Cambodia. ATMs are everywhere, the people are more worldly-wise a bit more jaded and all speak good English. The roads are numbered, from 1-500 odd, but in such a random order you wonder if they had been on the old pipe before organising it. Our trip was punctuated by Rick getting his fix of fried chicken and me buying an ethnic skirt that has bells sewn into it. I sound like a walking tambourine.
So another long coach journey and finally we reached Siem Reap to be greeted by a friendly tuk–tuk driver sent to us from the hostel for free. Seriously staying in the most amazing place right now. $8 a night for a lovely air conditioned room, Hot shower, free water, tea and coffee, breakfast and free tuk tuks into town. All set in a very pretty area with Bamboo huts in the garden strewn with fairy lights. The Golden Mango its called, defo pay it a visit if you are ever in Siem Reap.
When I was in China I was desperate for a massage by the much talked about blind masseuse but alas I was working and didn’t get time. Today however we visited ”Seeing Hands” A simple wooden room off a back alley in Siem Reap. We were greeted by a rather charming chap who gave us outfits that made us look like mental patients and told to lie on the massage bed.
All was going swimmingly until he grabbed his belly and started belching, I don’t mean a little burp rather a consistent reverberating belch , like when you are vomming, you know the type. Luckily Rick got him. He seemed rather concerned about Ricks bum crack popping out and as I was waiting for my masseur to arrive I kept watching him feel his bum and pull up his pants. Hilarious. My chap arrived and clambered over my back and despite the burping and the odd noises made in tourettes fashion it was the best massage I have ever had, amazing. 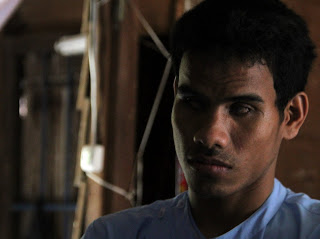 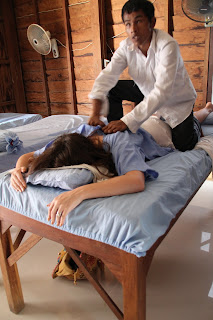 We have found a Pizza parlour called ”Happy Herb” as you can guess it does what it says on the tin. We are yet to visit we thought it best to avoid the night before a 5am start to catch the sunrise at Angkor Wat . Apparently they used to have bowls of marijuana like tapas in hostels not long ago in Cambodia. Now its strictly for use in cooking apparently, cos eating it ain’t bad for ya. Lovely random Cambodian Law. P.s. If you get called a mong in Cambodia don’t be offended it means pretty, that or some one’s winding me up.

Sara Damergi is a TV presenter, entrepreneur and globetrotter. TV clients include, MTV ,5IVE, Bravo, Sky and Channel 4. Sara also presented international extreme sports show, ''The Crunch'' filmed across China which was a prime-time success worldwide. Sara is of Lebanese and English descent and has always had a passion for new cultures and travel having lived in Beirut, Cyprus, London and in her clubbing heyday Ibiza, she is now indefinitely travelling the world funded from her internet businesses and blogging about it with her husband What Politz and Damage Did Next.
Read More Share
Ethiopia’s Simien National Park
24 Amazing Photos of Textures & Patterns