I’ve always been a climber so it should be no surprise that while I’m traveling to all 54 African countries, I’m climbing the tallest peak in each country. There was only one country’s lowest point that intrigued me: Djibouti which also has some fabulous food also for the foodies among you. (Info tidbit: more about it’s history, culture and economy) For those of you who aren’t familiar with this unique destination, Lake Assal is a crater lake in the Danakil Desert in central Djibouti. Think emerald water against dormant volcanoes and black lava fields. Its water is known to be extremely salty all of which is fed by hot springs and where it’s dry, there is a white salt bed from which lake water evaporated over many years. 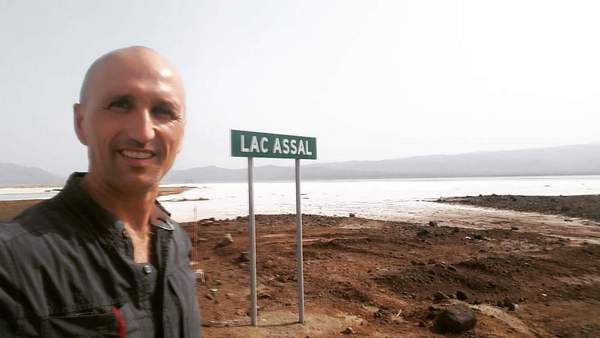 Lake Assal is always an inferno. The upside is that the salt lake, which is the saltiest on Earth, provides a way to cool off, even if you can’t swim. You’re guaranteed to float, thanks to the saline water.

I’ve also been to North America’s lowestpoint: Badwater, Death Valley. I visited in December, which had pleasant temperatures. Death Valley National Park straddles eastern California and Nevada and is most known for Titus Canyon, with a ghost town and colorful rocks, and Badwater Basin’s salt flats, as noted above, North America’s lowest point.

The highest point I’ve ever climbed was Kilimanjaro (nearly 5,900 meters). I did it twice and vomited on the summit each time.

All this talk about highs and lows may kindle your curiosity about other quirky points and facts about the world.

For example, the summit of Chimborazo, Ecuador‘s tallest mountain, is usually considered to be the farthest point from the Earth’s centre, although the southern summit of Peru’s tallest mountain, Huascarán, is also up there. Both have elevations above sea level but still more than 2 kilometers less than that of Everest. Mt. Everest, seen from Tingri, a small village on the Tibetan plateau at around 4050m above sea level. Photo credit: Wikipedia

For those who have climbed any part of Mount Everest know, it’s a magical experience. It is also known in Nepali as Sagarmāthā and in Tibetan as Chomolungma, and is meant to be Earth’s highest mountain at 8,848 meters above sea level.

The lowest exposed land on Earth is at the Dead Sea shore, at 413 meters.  The shoreline of the Dead Sea is also the lowest dry land on Earth. Those seeking high adventure and have an expanded threshold, head to Antarctica which is 2,538 meters (or 8,327 feet) below sea level.

As an aside, other adventure travel seekers should head Australia’s Wollongong meant to be the happiest place in Australia and those who love adventure climbing should consider climbing Mount Kinabalu in Borneo.

Francis has written a couple of travel books including The Hidden Europe: What Eastern Europeans Can Teach Us and Hike Your Own Hike: 7 Life Lessons from Backpacking Across America. He also produced a 77-minute video about his CDT Yo-Yo.
Read More Share
San Antonio Shoemakers For Super Comfort on the Road
Improve Your Resilience, Psychic + Physical Body & Capacity to Love