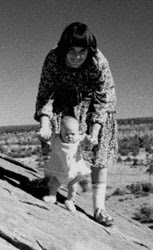 This week marks the 30-year anniversary of the disappearance of a baby named Azaria Chamberlain, snatched as she slept in a tent on a family camping trip in Australia’s outback by a wild dog known as a dingo. Or, as was once popularly believed, murdered by her mother, Lindy Chamberlain.

In America, we know this story best from the 1988 Meryl Streep movie A Cry in the Dark, known better as the movie in which Streep wore a hideous black-banged wig and was criticized for a slightly off-kilter Aussie accent in which she delivered lines like, “The dingo ate my bab-ay.” (Cringe)

Pop culture phenomenon and/or dreadful miscarriage of justice? Lindy Chamberlain was tried and convicted of murder (her husband was convicted of being an accessory) even though no body was found and expert witnesses, including Aboriginal trackers who followed dingo footprints from the baby’s tent, contended that a dingo certainly could have carried out the removal (and consumption) of an 8-week-old infant.

Evidence to the contrary included what was at the time believed to be blood stains in the Chamberlain’s car and clothing found (and not found) that was inconsistent with Chamberlain’s descriptions of how the baby was dressed. More damaging, however, may have been the trial by public opinion of Chamberlain, who was perceived as acting more like a person wrongfully accused of murder than a grieving mother. An ensuing media circus led to a flurry of rumors, claiming everything from the name “Azaria” meaning “sacrifice,” to the Chamberlains being devil worshipers.

Chamberlain was sentenced to life in prison but skepticism remained. For one, reasonable doubt surrounded the “blood stains” in the car. They were subsequently proved to have been “sound deadener” sprayed on the car during manufacture. And in 1986, when a hiker fell to his death near the Chamberlain campsite and his body was recovered, a dingo lair was discovered as well as Azaria’s missing “matinee jacket” (its imprint was evident in the dirt where the dingo footprints had been). Lindy’s conviction was reversed, and she was set free.

Initially the government of the Northern Territory (where Chamberlain’s trial was held) set about compensating the Chamberlains with more than a million dollars for wrongful imprisonment. But controversy and inquest would not stop. Lindy Chamberlain continues to try and have the cause of Azaria’s death amended on the death certificate from “unknown” to “dingo”. On this 30th anniversary, Chamberlain has published “A Letter to Open-Minded Australians” on her website. In the letter she states that she has forgiven those who wrongly accused her although she will never forget “the day truth was dragged in the dirt and trampled upon.” She continues to seek “a voluntary apology” from her accusers but states “I am no longer holding my breath.”

Source and photo: Lindy Chamberlain-Creighton; Sydney Morning Herald, “Dingo Back in the Dock over Azaria.”

An accomplished digital photographer, her photos have appeared in 7x7 Magazine, the San Francisco Chronicle and Google Schmap.
Read More Share
Rich China, Poor China
Where Would You Like to See More Agricultural Funding Directed? – Part 11