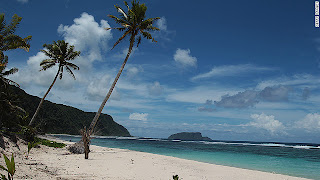 By making a shift to the opposite side of the International Dateline, the archipelago of Samoa will now join Australia and New Zealand in being a day ahead of the United States.

The change will be made by canceling Friday, December 30. Samoans will go to bed this Thursday night and wake up on Saturday morning, December 31. At the end of the day, Samoa will be the first place to welcome 2012 instead of one of the last.

According to CNN, Samoan prime minister Tuilaepa Sa’ilele Malielegaoi has said the shift to the eastern side of the dateline would put the Pacific island nation of some 180,000 people on the same footing as its key trading partners in New Zealand and Australia, taking advantage of those economies links to China and the Pacific Rim.

Currently, Samoa is 21 hours behind Australia and 23 behind New Zealand. Sunday in Samoa has been Monday in these two countries and Friday has been Saturday. With the dateline shift, Samoa will be 1 hour ahead of New Zealand and three ahead of Australia.

The dateline shift is not the first change Samoa has made to keep up with the Aussies and Kiwis. CNN reports that “Two years ago the government switched to driving on the left so that expat Samoans in Australia and New Zealand could send used cars home to their relatives.”

Source: CNN International edition, “Samoa to go back to the future with dateline shift.”

An accomplished digital photographer, her photos have appeared in 7x7 Magazine, the San Francisco Chronicle and Google Schmap.
Read More Share
14 Beers From Around the World: Feeling Tipsy Yet?
Jerusalem Israel In a Section of a Church Where Jesus was…