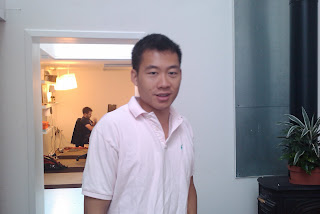 Haegwan Kim (HK); Today I’m going to talk with Justin Kan, who is widely known as a pioneer of personal broadcasting at Justin.tv. Thank you so much for your time. First let me start by asking why and how did you start Justin.tv?

Justin Kan (JK); I started Justin.tv as more of an experiment. We wanted to broadcast, see if we could make our own live show, kind of like Big Brother but live online 24/7. So we started the site off as our way to experiment in this new media. It pretty quickly turned into a lot of people who gave us feedback, saying we want to broadcast something. People said, I want to broadcast my own comedy show, or a bike race, or myself playing video games. So we made a platform for anyone to broadcast.

HK; Where did you get the idea from? I watched you broadcasting with a camera on your head. It was an absolutely new idea, right?

JK; Yes, it was pretty new. We just thought of it. I was driving around one time with one of my co-founders of the company. We were having an interesting conversation, and I was, like, I wonder if anyone would like to hear this? And then that turned into Justin.tv.

HK; That’s an interesting story. What is the key element to make a successful web product? At early stage you got big-name investors like Paul Graham.

JK; I would say the key to getting our investment was a bit like our previous relationships with Paul. It was an interesting idea and we were a close team that people thought could execute a business. In terms of creating a successful web product I think the keys are being able to do experimentation on the site and measure the results. Any commerce site is a really good example. You want people to come into the site, you want them to browse around, you want them to put something in their cart and then check out and pay you. So you’re just optimising that funnel of how to get people from Step 1 to Step 2, Step 2 to Step 3, and Step 3 to Step 4. Maybe it helps if you give everyone a discount code or change the colours of the page or whatever, but the key is you’ll never know unless you experiment and measure it.

HK; Today we have many websites for personal broadcasting. What is the greatest differentiator of your company from others?

JK; I think Justin.tv is the easiest. Our goal is to make things fast, easy, and fun to broadcast. There are other competitors but they’re more headed towards the premium market or working with big companies. Our goal is to make it so that anyone can be broadcasting in, like, 30 seconds. It’s super-easy to do, and that’s all we focus on.

HK; Can you tell me how personal broadcasting is changing today and what will happen in this field?

JK; I think what will happen is broadcasting will become more and more accessible to people. One of the things we’re working on is we’ve got an iPhone app that lets you broadcast. You can just pull it up and then you can immediately be live. It will be from a cellphone device. Our goal is to make it so that anyone can broadcast from anywhere…

[Justin showed me his iPhone 4 and started broadcasting]

HK; Is this already broadcasting?

JK; I click it and I can go live and then it’s live at this URL, and you can watch.

JK: This is what we think the future of broadcasting is.

HK; I was wondering what will be the motivation for people to broadcast? Is it just to let others know what you’re doing? That’s similar to Twitter.

JK; Yes, I think it’s to let people know what’s going on, to save something. I think it will be the easiest way to save video. You can be live, people can interact with you and then you can get it online; it’s instantly online already, you don’t have to upload it or anything like that.

HK; Do you think that kind of thing will be common?

HK; I learned a lot Ok, as my own research is on the law of success I was just wondering your personal definition of success, not as a businessman.

JK; I just think people should do whatever makes them happy, when it comes down to it. A lot of people have asked me what should I do? I always tell them do whatever you want to do. I think that you don’t really change your happiness with money. After a certain baseline level of money, happiness doesn’t increase for additional money. I think it’s $75,000 a year or something like that. No matter what you do, if you’re somebody who wants to be successful and achieve things in terms of making a lot of money or being successful in business, you’re not actually going to be any happier once you do those things. There’s always another milestone; there’s always someone who’s richer than you. If you like doing that, you should do it but you should really do the thing that makes you happy, because nothing’s going to change when you’re successful, when you’ve achieved your goals. Achieving goals isn’t like changing your mental state.

HK; That’s interesting. For you, creating Justin.tv was…

JK; I think it’s something interesting and fun for me to do. It was a crazy idea. Most people wouldn’t do that. Now this is kind of like an office but I still get to wear shorts to work.

This is something where I think I can learn a lot. I’m excited to show up to work. It’s something new every day for me. I like doing it.

HK; Cool, As a final question can you give me your advice to achieve success in general life?

JK; The number one thing I would say is “the downside is never as bad as you think”. People are afraid to go and start their own business or do something adventurous or quit their job because they think they’re, first, acclimated to their current situation, and second, they’re afraid of the unknown. They’re afraid of losing what they have. But it’s really not that bad. We had pretty good job offers when we graduated from college. We turned those down and started our own start-up. It wasn’t Justin.tv; it was the start-up before this. It was a failure actually, it was called Kiko. We ended up selling it out of eBay.

After we sold that so many people came to us trying to hire us for various jobs that were better than we had a year ago. So it was kind of like we got to spend this year doing whatever we wanted, and at the end of it we were better off than we were before if we’d wanted to go in the industry anyway. People are always afraid that this is the only job offer I’ll ever get. I have to take it, or I have to stay at my current job because I won’t be able to be rehired. But the thing is if you’re competent, you can go and do whatever you want and always come back to what you have right now.

HK; So, you have to have a long-term view.

JK; Exactly. Think about it long-term and also don’t be scared. You shouldn’t be scared about it.

Haegwan Kim is a writer who was born in Osaka, Japan in 1989 and grew up near Tokyo where went to a Korean school for 12 years.
Read More Share
National Farmer’s Market Week and Not Far From The Tree
Dallas Xplosion: August 15, 2010