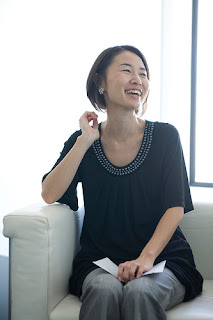 In an interview with Chiaki Hayashi on her definition of success, not as a co-founder of Loftwork but her personal one, she says, “well, it’s not about whether you can do or not, it’s whether you want do or not and make actions.  I force myself to stop thinking whether or not I can do and if there’s two choices, I take both of them. I think people often take only one when there’s two or more choices, but if we get twice energy, we can do the both right? So it’s fine to challenge everything and just do it!

HK: Wow, that’s powerful. So your stance on challenge itself is success for you. I mean, for many people achieving success is a kind of success, but your success is more like mindset.

CH: Well, my definition of success is doing what you want, and the mindset is a kind of preparation for that. I think we need energy to achieve anything, for example passion, wisdom, physical training, or human network. But all of them can be said as “energy”. And you can raise your energy throughout your life. No one has energy since they were born. That’s why I said I challenge everything I can, this is because I want to enhance myself by raising energy. You know, once the work started, you should do no matter what. [Laughter]

HK: Loftwork, the biggest creators’ online platform in Japan. Is that what you wanted to achieve?

CH: Nooooot at all!! [Laughter]

CH: At first I aimed at connecting creators and tho who want creations directly. The concept is called “creators direct”. So this is like if you think of yourself a creator, you’re a creator. Nationality, gender, age, everything don’t matter. Whether it has value or not can be decided only by people, not professional workers. Everything is based on direct matching, which hasn’t been changed yet.

But that was a decade ago, when infrastructure of the Internet hasn’t be set and creators couldn’t even scan their arts. So there’s just few people who update their works and also at that time EC hasn’t been famous, so people were suspicious on buying creative on the web. Many people told me it’s suicide to sell creative at the moment.

HK: You went there too early.

CH: Yup. So I thought if I can’t do this directly, I can at least provide resources of artists indirectly, and Lofwork has been taken the model. Creator Search Platform. Today many people tell me they’ve got lots of works on Loftwork and we made a certain circulation of human talents. But still, when I find a company that connect artists and people directly, I say “Jeez, this is what I wanted to do!!”

HK: Hahaha [Laughter]. So this is really not what you wanted to do, but you made a kind of…

CH: Yes, I still don’t feel satisfaction but I believe Loftwork made artists’ lives better. And I still pursue the first dream and am trying to accelerate the activities.

HK: You mean you’ll change the way of Loftwork? Going to EC part?

CH: Of course, but it’s not like EC but creating a platform where money goes to artists directly. For example using Paypal, providing talents not only at a national level but…

CH: Yes. So having the first vision, I want do various challenges from now.

HK: I think circulating capital on the web and for creative workers are pretty tough challenge since many of their works aren’t visible. I want to hear your perspective on how you think to capitalize, or evaluate invisible works and create capital flow for them?

CH: I have an idea on that. So, until now, there’s been capital flow for visual materials like images or files on EC. But I think this model will change.

I talked about this at Vabel Conference, but Ryuichi Sakamoto’s project let me realize that the model between consumers and producers would be over and instead there will be relationship economy – social commerce.

So it’s not like buying Sakamoto’s song, but it’s more like paying money because we like his way to live, we like to be a part of his musical activities. It’s already happened in the US, for instance Kickstarter. They are paying for engagements. They are not paying for materials but paying for dreams, ideas, and engagements. I believe this will be mainstream in the 21st century.

In this sense, creators have huge influence on social sphere and I want to create a platform them, which can be an answer to your question.

CH: Don’t you think it’s super fun if you pay for 100 dollars for your favorite artists and get a surprising present from him/her!?

HK: Cool! On the other hand, since you’re engaging in Creative Commons, I have few questions. You know, Japan is really nervous about copyright issues right?

HK: And Creative Commons doesn’t disagree copyright itself but is trying to clarify the process?

HK: With this part and your loftwork activities for artists, I want to ask about your thoughts on how copyright issue will be changed in the future?

CH: Well, just come along to our talk session if you’re free on March 26th. [Laughter]. What you asked me is exactly what we will talk about at Roppongi Art Night. Its title is “20×4 dialogue” and 20 people will talk for 4hours! There’ll be 4 themes and one of them is how we can utilize copyright and we’ll gather people both from artist side and Internet side. Joi Ito will come.

CH: Yes, and Professor Miyaga, who created MIT open course will also join the session. In the session, I’d like to say “society is changing and that’s unstoppable, no matter how you lament”. This flow, more and more people put their works on the web, is irreversible. Of course there’ll be people who get benefice from change and lose their privilege, but this flow itself will never change, never. So it’s useless to talk about whether we use the Internet or not, the important thing to talk is how we use the Internet.

I don’t think it’s negative to share works on the web, and I even think killing information only on the web – except few examples – would lead failure in real world too. Being too protective for copyright would kill works in the real world, at least I believe so. So as business strategy, it’s necessary to enhance your famousness on the web regardless what type of business you do.

HK: So there’s no choice for you?

CH: No. But the choices on how you use the Internet – there’s tons of choices on this. So how free you make copyright, when and how costumers pay money, and so on; there’s choices. Of course you don’t have to use Creative Commons. But talking about whether you put your works on the web or not; there’s no choice.

HK: Sharing is the key – I think sharing is not a cup existing in the infinity space, but hundreds of cups interacting vigorously. And you think this action of sharing itself is synchronizing with actions in real life right?

CH: Yes, but I don’t say we all should use CC and share with people all around the world. It’s totally fine to share just with 100 people. Including all choices, how we share on the web is important.

HK: By the way don’t you think there is negative image on the Internet in Japan?

HK: Since I travel around the world, I realized that each country has each opinion on the web. In India they think it’s a way to get jobs, in America it’s innovation that makes people’s lives better, in the UK, it’s …. way to enjoy life? I don’t know, but anyway they all utilize the power of web. But in Japan, I feel there’s negative image on the web.

CH: I presume many Japanese people don’t want the web to grow, to be honest.

HK: Yes, so I want to ask you whether Japanese people hate share or not! [Laughter]

CH: Ha ha, I think business person don’t like, but in personal they like sharing, very much. You can say that from the fact that Twitter’s second largest language is Japanese, there’s lots of bloggers in Japan. In this sense Japanese really like to tell their stories to other people. So potential at an individual level is quite high. But this mindset doesn’t go to business because Japan had successes with offline works for a long time. But it will change; now is a time of transition.

HK: So you think this will change?

CH: Yes, Japan has been famous by creating things. So I think many of mangers can’t resist the atmosphere of the web, saying “you sell this quality!?” But as I said individuals’ level is high, so will be changed soon. I feel necessity to engage into this transition, that’s why I do lot’s of challenge apart from loftwork.com.

HK: Do you think we can share success as well?

HK: Does that mean sharing success story or something and other people gets happier?

CH: No, what I imagine was each individual has an element to succeed, and by sharing “something” on the web, that elements get bright. So it’s not sharing success story of me with you, but by sharing my story, you realize your own success because your success is only for yourself.

HK: Great opinion. As a final question, can you tell me your advice for others to achieve success in their lives?

CH: Well, I’m not a “successful” person yet.

HK: Everyone tells me as you exactly said. [Laughter]. It’s totally up to you.

CH: I have advice for myself. So as I said earlier, I’d be happy if I can share this with people on the web. Make actions – no need to complain.

This is my advice. I regard creation rather important than criticism. I believe creating something makes people happy above all. In my mind, success equals happiness, so if I’m happy, then that’s fine. Dr. Mogi was saying the same thing at Vabel Conference right? We don’t know when we die, and when we die, there’s no time to complain others. More than that, I want to spare time to make people happy i.e. creation. Making something new; that can be things, a company, love, children, whatever – but creation makes your life better. This is my belief and advice.

Chiaki Hayashi is a co-founder of Loftwork.

Haegwan Kim is a writer who was born in Osaka, Japan in 1989 and grew up near Tokyo where went to a Korean school for 12 years.
Read More Share
Eat Your Veggies, Get Healthy and Be Beautiful
The World of Barbies