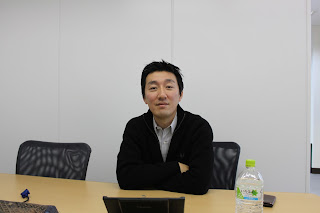 Motohiko Tokuriki says of success in an interview with Haegwan Kim: it’s a difficult question, because I haven’t thought about it. I think it’s whether you’re satisfied yourself or not.

HK: Does that mean “satisfied about what you’re doing”?

MT: I don’t think success is a thing that has an end. For instance, selling a billion yen, or earning a million yen – that’s not success. In the end, for me, doing what you want to do and accumulating tiny successes one by one – that’s success. Whether you’re successful is determined only by yourself, and whether you’re doing what you what to do.

HK:  At first, you’re familiar with social media, especially blogging. What’s the beginning for you to start blog?

MT: I was working for NTT and thought I’d like to start new business. But when I started, I didn’t know anything and had a tough time. in 2004, blog was popularized and I got interested in this field.

HK: Is that in Japan?

MT: Yes, the US is earlier than this. Especially I remembered many bloggers appeared after 9.11. They dramatically increased at that time.

HK: You told me that success depends whether you’re satisfied or not. Is the reason you started blog and social media that you felt some sort of possibility for that?

MT: No, it’s opposite. I chose social media not because I want to succeed, but I started blogging and then gathered lot of things and learned a lot.

There’s fundamental difference between us, that’s you interview “successful” people, but I don’t think of myself as a successful person.

I quitted NTT and started venture, but I failed. I mistook many times. The good thing is that I wrote that progress of mistakes on blog, and as a result I had human network and changed my perspective on business and eventually I earned credibility in this business. So I’m still far away from being called like “successful person”

HK: I got it. But the purpose of this research is not interviewing successful people and I don’t try to create a framework for success. What I’d like to do is spreading diverse ideas on success and society.

I want to listen to your opinion on satisfaction again. Do you have any idea on how to be satisfied yourself?

MT: Well, many people who are regarded as successful often don’t think of themselves as successful. For example I like “Hokutono-Ken” (Japanese Manga), there’s really few people who can die like “Raou” (a character in the manga) who said that “I have no regret” just before his death. Son san as well.

MT: There’s few people who can foster a company in one generation that much, but I don’t think he has being satisfied himself. That’s why he takes risks and bought the phone company and keep challenging and challenging.

Of course there’s people who complain about what he’s doing and it’s pretty philosophic but – it’s not always true that “socially successful” people feel themselves successful or satisfied. In the end, once you define success as being satisfied, you would never be successful.

HK: Well, so it can be said that present satisfaction is much more important than expectation for future’s satisfaction.

MT: You can say so. I think success is not “past tense”. Accumulating tiny successes day by day, that’s rather important.

For instance, there’s a person who wants to be a TV star, but there’s nothing you can get just by being TV star, because you will see a new challenge. Same for Hollywood star. So success can be said as a point you’re aiming at.

HK: Then can I say that you left NTT not because you wanted to have a current position but when you look back now, there’s a road you walked so far. Is this right?

MT: When I left NTT I didn’t think anything, but like you said, there’s been changes of value. When I was at NTT, I was so simple, the definition of success equated with a promotion. Once you got into the company, everyone aims at being a CEO. Of course there’s people who’d be satisfied with being VP or DM, though. But now, I can say “success is not a mathematics”. You can’t define success just with number.

You get lots of money but do what you don’t like to do, or you get less money but do what you really want to do. It’s depending on you. And I think it’s linked with the phenomenon of increase in the number of social entrepreneurs in these days. Of course there’s huge differences among people, for example who can be satisfied if his family is happy. It totally depends on who you are.

HK: What’s the biggest change in your life since you started a venture?

MT: It’s more accurate to say “since I started blogging”. So I quitted NTT and had a-year consultancy and moved to a software venture. The biggest change is that, when I was at NTT, I was trying to improve the company’s reputation. But here in a venture, we create a horizontal relationship. For example, promoting i-mode and getting satisfaction in the company – this is a huge company but we collaborate with other ventures and achieve success together. I found the collaborators by blogging. Simply, being friends is the fastest way to promote a venture. Of course it can be said to the gigantic companies, though.

It’s whether individuals come first or companies come first – I learned this since i started a venture.

HK: Since we can see blog as an individual media, can we say that the power of individuals is getting stronger and stronger?

MT: You could say so. When IT companies create new innovation, like Google or Twitter, many of them can be benefits for individuals. Obviously it’s time for people to live “comfortably”.

HK: Personally I think making friends in real society and virtual society is different, and with the stronger individuals on the web, can we say our society itself, especially in terms of how to create a community is also drastically changing?

MT: I think there’s no longer a clear distance between “real” and “virtual”. Until now, even if you chat with someone on the web, you wouldn’t talk to him in real society. But today, especially since 2004 in Japan, there’s so many connections between real society and web, and many people are surpassing the border. People knew each other in blog met in a conference or met in a conference and found their blogs and so on so forth. I don’t think it’s rational to separate real society and the world of web anymore – they are both “a place to create a community”.

The biggest difference is a cost. Meeting people – for example like this interview – takes time and money. Of course phone call as well, you should make an appointment. Blog, Twitter, and other new communications are different – they are “pull” communication. Their attitudes are “hey, I wrote this, so check this out if you like”. It’s not “please read this” – which is “push” communication. Obviously the latter takes more time, energy and money.

For instance, if you take interviews and send it to your friends, I guess that’s 100 or so. Or sending Nengajo (Xmas card of Japanese that send each other on January 1st), you’ll get tired soon.

But pull communication, you don’t have to. Plus, it doesn’t mean to have less communication ability. Sending 100 emails takes lots of time but tweeting to 100 followers takes just a moment. And sending 10 emails are spam but 10 tweets are just usual.

I think with the rise of the Internet, our ways to communicate are getting much easier. So far even if we exchanged name cards, we could barely communicate with some of them, maybe 50 or something? But now we can keep all the connections with pull communication. In this sense as well, we are now living in the age when individuals can life comfortably.

HK: As a final question, I want to ask your advice to achieve success.

MT: It’s good to have a high vision, but I think it’s rather important to start with a small step. I’m not sure whether it’s appropriate example, but people who failed with blogging often have an aim at earning lots of money.

People who are successful with blogging often write because they want to write – that’s why they can blog everyday. They use blog as a personal memo or something, and as a result, gather lots of readers. Their goal is really low, and the purpose of blog is just because they like to write. If you start blogging with an aim of earning money, since it’s difficult to earn money and readers by blogging as you know, people feel frustration and eventually end up as a failure.

But it’s interesting that blog is really helpful in many ways if you keep doing for a couple of years. For instance even it’s a small amount of money you can get on blog, you can communicate with many inspiring people like “oh, you’re the one who write that blog aren’t you?”. The value of these human networking can’t be measured by money. So I believe it’s more important than anything to accumulate small successes.

Motohiko Tokuriki is the CEO of Agile Media Network.

Haegwan Kim is a writer who was born in Osaka, Japan in 1989 and grew up near Tokyo where went to a Korean school for 12 years.
Read More Share
Natural Dyes to Replace Synthetics?
Simon’s Town’s Floating Museum: The SAS Assegaai