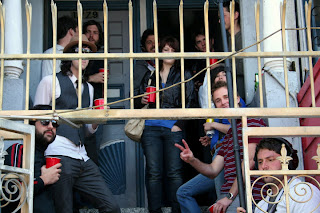 A new social media study by Bloom Studios takes a look at data visualization, something that sounds a little boring if you’re not into studying the deep mechanics of social media. But what’s sure to grab many people’s attention about this study is that it examines social media trends on one of the world’s most famous streets – Haight Street in San Francisco.

Most likely, if you’ve visited San Francisco once or twice as a tourist, you’ve made the pilgrimage to the street that launched the Summer of Love. You’ve found the epicenter of the hippie movement at the corner of Haight and Ashbury and you looked for the houses where Janis Joplin lived and the Grateful Dead and Jefferson Airplane crashed. By heading up the hill, past Buena Vista Park, following the smell of patchouli oil and marveling at the size of the bongs in the local head shops you discovered the Upper Haight. If you’ve taken the long way and crossed Divisadero Street before your ascent you would have been in the Lower Haight. The Bloom Studios study reports some highly distinctive trends between these two sections of the street.

For one, according to local Lower Haight Street blog Haighteration, people in the Lower Haight are grumpier. The study’s analysis of “Foursquare checkins, crime data from DataSF.org, images from Google Street View, languages and topics from Twitter, and pictures from Instagram” found that Lower Haighters negative social media commentary outweighed the positive. Up in the Upper Haight, the mood was decidedly more positive.

Having lived at the crossroads of Upper and Lower Haight for several years, I feel this is pretty easy to explain. Lower Haight is local. Unless you’re an in-the-know traveler accessing some good local apps or carting around a tattered copy of Lonely Planet you probably won’t spend much time here. Lower Haighters are going about their local business, picking up the dry cleaning, looking for a parking space, trying to get a table at The Grind on a Saturday morning. Last year, the Walgreens burned down, so now you can’t even replenish your basic sundries in the ‘hood.

Meanwhile, Upper Haight is filled with tourists happily texting and tweeting in Swedish or sometimes French (according to the Bloom Studios assessment of languages used on the street). If they notice the homeless people and the grime, they are either oblivious or on holiday – it’s not distracting enough to document. Upper Haighter residents don’t spend a lot of time on this part of the street. For their day-to-day they cross a few blocks in either direction to Cole Valley, or the up-and-coming Divisadero Corridor.

While the Bloom Studios study obviously has some flaws and odd skews (could the abundance of tweets in Thai from the Lower Haight be coming from the kitchens at Phuket and Thep Phanom?), it is a first step in using social media data readily available to gain insight into numerous habits and trends happening in a certain place. Future studies could reveal much valuable hyperlocal information for businesses and residents alike.

An accomplished digital photographer, her photos have appeared in 7x7 Magazine, the San Francisco Chronicle and Google Schmap.
Read More Share
The Living Colors of the Huaraz Market – A Photo Essay
Feeding Mouths and Empowering Communities in Brazil