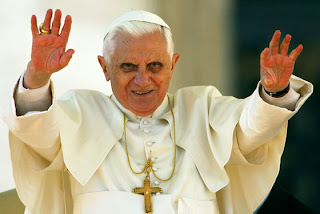 He hasn’t issued a tweet yet from his new platform – @pontifex. That social media /slash/ blessed event is slated for Wednesday, December 12, at which time he will answer questions about matters of the faith that he is now accepting via the hashtag #askpontifex, according to the New York Times.

Although he has yet to actually use the social media tool, his Holiness has already racked up over half a million followers at this writing – pretty impressive for an 85-year-old man. Don’t expect a follow back, though. The Vatican’s communications adviser, Greg Burke, a former Fox News correspondent, says the aim of of the account is for the Pope to be followed by the younger generation of the Roman Catholic Church’s estimated 1.2 billion members.

No word yet if he’ll make an exception and follow @Jezus_Christ.

The Pope’s tweets will be issued in Arabic, English, French, German, Italian, Polish, Portuguese and Spanish. More languages may be added later.

The Pope isn’t the first religious leader to use social media. Aside from numerous spoof accounts like the aforementioned Jezus_Christ, verified Twitter accounts exist for the Dalai Lama (more than 5 million followers) and mega-church pastor Rick Warren (800,000 followers). Numerous leaders in the Jewish, Muslim and Hindu faiths also tweet…um…religiously.

An accomplished digital photographer, her photos have appeared in 7x7 Magazine, the San Francisco Chronicle and Google Schmap.
Read More Share
Courage in the African Bush: Wildebeest Not Ready To Die After Crocodile Attack
Vivacious Colors Around the Globe: From Cappadocia Turkey & Venice to Southeast Asia