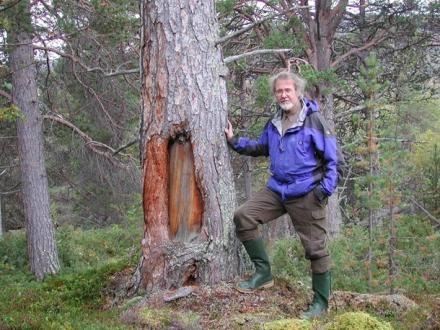 Scientists in Norway have solved a mystery that has perplexed them for many years. Researchers working in the Øvre Dividalen National Park in Northern Norway were at a loss to explain the mysterious markings on pine trees in the Park. The marks were the scars where bark had been removed from a patch on the tree. The marks, or scars were always on the Northern side of the tree.

Theories included way-finding marks of reindeer herders and the work of settlers who started farms in the Dividalen valley in 1850, but none of these provided a satisfactory answer to the researchers questions. The marks were too random to be useful for way-finding. Using tree-ring data the researchers discovered that the marks date from the 17th and 18th centuries, before the settlers reached the valley.

The solution to the puzzle was reached when the researchers studied lifeways of the Sami people. Speaking with ScienceNordic: Arve Elvebakk of the University of Tromsø (UiT)
Department of Natural Sciences explains that: “It turned out that this came from the ancient Sami practice of harvesting pine bark for food… In a laborious process the bark was converted into flour that could be used in cooking.”

Elverbaak theorizes that the marks were always placed on the Northern side of the tree in deference to the Sami sun-god who lived in the South.

Elvebaak notes that the pine bark was wrapped in birch bark, buried and and a bonfire built above it. This was kept lit for several days, after which the bark had lost it’s bitterness and was edible. The roasted bark was then ground into a flour and “mixed with other food, such as porridge or a stew with
animal fat.”

Photo credit: Arve Elvebakk poses next to one of the marked pines at Dividalen. (Photo: UiT)

Whether hiking the length of Hadrian's Wall or exploring for petroglyphs in New Mexico, history and adventure are Monty's passion.
Read More Share
Meet the 10 Most Dangerous Roads in the World
Cell Phone “Over-Usage” Issues & Sexting