“Rick sat with sour look on his face as the overtly camp Vietnamese waiter greeted him with a giggle and his ritualistic omelette breakfast and black coffee which was awkwardly placed on the table and shuffled towards him with an embarrassed hand. Rick acknowledged the waiter with a smile which had noticeably less enthusiasm than on previous day’s…”

“…said Rick as he looked at me through his sunglasses.”

“…continued Rick. He let out a sigh and turned his cheek in the direction of the other diners stopping only to look back and glare at me with his bloodshot morning eyes as he slugged down his first mouthful of coffee.”

What you just read was one of the many monologues or narrations which I was subjected to by Sara during our lazy days on Phu Quoc Island. You see when you spend so long in such beautiful surroundings with no time restraints, no 2 week ultimatum to try and cram in as many overpriced tours, excursions and activities as possible whilst coating oneself in mayonnaise in an effort to soak every last ray of sun up before flying back to ‘normality’ you might find yourself in a similar situation to us and do very little other than waking up, dragging yourself to the nearest sun lounger or eatery before complaining how tired you are and justifying falling asleep for the afternoon. If beauty sleep is indeed a reality then I have never looked younger and fresher. Given our somewhat light schedule whilst on Phu Quoc Island and to save ourselves having to exert any energy doing something crazy like renting a moped or exploring the nearby town, we invented these quirky little games to entertain ourselves whilst drifting from one day to the next. Much like a mental patient who talks to the voices in their head – except I married my voice and now spend my days travelling the world with her.

The narration game is by far Sara’s favourite to play. Mainly because it annoys me immensely and she is incredibly skilled at integrating my grunts and groans quite seamlessly into her monologues. Another game she likes to play I have imaginatively entitled, ‘The Show Tunes Game’. This game was first conceived during our stay in Jasmine Valley where I innocently pointed out the faint sound of gibbons from the trees one evening. From here I was treated to an entire show tune about those gibbons. Amazed by my wife’s incredible gift for freestyle show tune singing I looked at her with wide, child-like eyes.

Without hesitation I was treated to a spontaneous show tune complete with chorus, two verses and an instrumental bridge about our little tree house. It is an incredible gift. Unfortunately for me and our fellow diners that incredible gift decided to manifest itself after a glass of red wine whilst sitting in the middle of one of the more upmarket restaurants on Long Beach. To make matters worse the piano player at the well-to-do establishment had a penchant to change what he was playing every 90 seconds which meant I was treated to a medley of songs on topics as wide-ranging as tennis balls to French windows. After an encore of “Can I have the bill please?” We left and made our way back to our humble little beach bungalow ready for another busy day of laziness and improvisational word games.

The weather we spent so long looking for during our time in Cambodia had finally found us in the most picturesque setting of our journey thus far and dare I say even the Vietnamese people have begun to warm to us. On reflection it was quite silly of me to assume that the staff at the border crossing was going to roll out the red carpet and greet us blessed westerners to their country, all grateful that we took the time to consider them in our itinerary. No. Of course they weren’t – I’m yet to meet a single pleasant person who works at passport control. I suspect when they told their careers advisor they wanted to work in ‘Leisure and Tourism’ they had dreams of a career with club 18-30 doing shots off of susceptible young girls navel’s whilst fresh meat was flown in from the motherlands every 7 days. Instead they find themselves in a dimly lit, grey room sitting in a box and living vicariously through the returning holiday makers as they recount their vacation to friends in an over enthusiastic manner. Luckily only a handful of the Vietnamese population work at border crossings and for the most part it’s easy to coerce a smile from the locals if you don’t mind initiating the exchange. 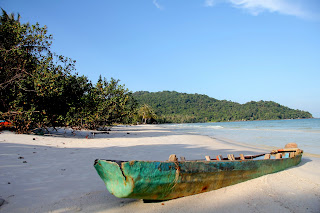 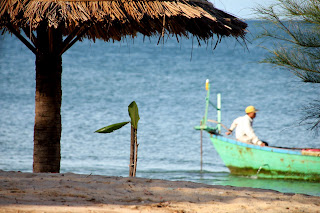 Well aware that our visa only lasts for 30 days and having slept, eaten and loafed our way through 12 of them it was time to discover what else Vietnam had to offer and head to the mainland however not before a brief reunion with an old friend and Barking College alumni, Nila Patel. Ho Chi Minh City or Saigon as it is all but officially known is an immense, grandiose city. Having spent the best part of two months in deserts, beaches and small towns the sight of neon lights filled our stomachs with excitement as our eyes were illuminated by the industrious city before us. Both Sara and I confessed that memories of London instantly came flooding back in a somewhat unexpected moment of remembrance. Our eyes darted around taking in our new environment as the urban jungle, a complete contrast to anything we have experienced on our travels thus far, exhumed energy. Technology, giant buildings, huge shopping malls, karaoke bars – it is as developed as any city I have visited. Hundreds, literally hundreds of motos stream through the traffic like motorised salmon during rush hour as the roads become impossibly crowded. Whilst not for everyone Saigon is the perfect supplement to a few lazy weeks in the sun. 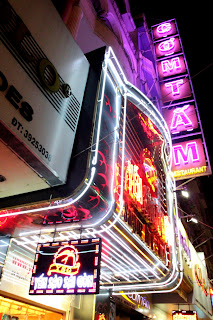 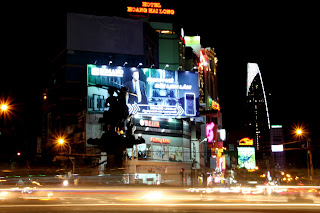 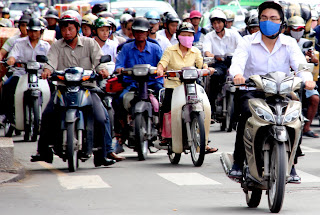 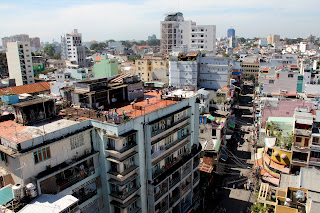 “Rick walked slowly, deliberately, with each step surveying the busy landscape before him. His face illuminated by a neon green sign displaying the word “Tattoo” – blink, blink, blinkety, blink. He settles in a bar as the soothing chords of Incubus can be heard above the madness of the bustling metropolis.”

“He assumed, as he sat leaned back into his chair.”

Sara Damergi is a TV presenter, entrepreneur and globetrotter. TV clients include, MTV ,5IVE, Bravo, Sky and Channel 4. Sara also presented international extreme sports show, ''The Crunch'' filmed across China which was a prime-time success worldwide. Sara is of Lebanese and English descent and has always had a passion for new cultures and travel having lived in Beirut, Cyprus, London and in her clubbing heyday Ibiza, she is now indefinitely travelling the world funded from her internet businesses and blogging about it with her husband What Politz and Damage Did Next.
Read More Share
Santiago’s Hotel Atton El Bosque & Andes Wines
Water Ice