When we arrived in Kampot the home of the world famous(?) green Kampot pepper strains we were greeted by a small community town full of character and roads lined with rundown colonial buildings of a bygone French era and yet more friendly, smiling Khmer faces, which having been here for over three weeks now, are without question the country’s greatest asset. Walking down the streets of Kampot and in fact most streets we have walked in Cambodia, you are greeted by a chorus of ‘Hellos!’ delivered with an enthusiastic Khmer twang giving truth to the old adage of ‘uptight/ill-mannered London’. Even down to the small customs like slipping ones footwear off before entering a building. If you were to see someone wandering around barefoot in your local Starbucks you might be tempted to brand them a nutter and report them to the nearest patron. 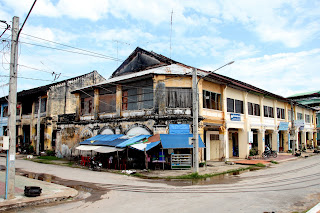 On a recommendation from a friend we holed up at the super-chilled out backpackers retreat Bodhi Villa. A quaint little Aussie run haven which I suspect harboured backpackers for a brief few nights on their way to and from Vietnam before heading north into the capital city of Phnom Penn. We met an eclectic mix of solo travellers, groups, couples and the few obligatory ‘yoga bods’ and ‘med-heads’ which generally gravitate to tranquil hideaways such as Bodhi. Whilst they probably knew the true origins of the word (enlightenment, awakening, to know) I was more than happy to ignorantly assume the laid-back, bong smoking proprietor had named his humble bar after the ridiculously cool character portrayed by Patrick Swayze in Point Break. Either way we were very happy to relax in the picturesque riverside setting whilst we worked out a swift plan of action. 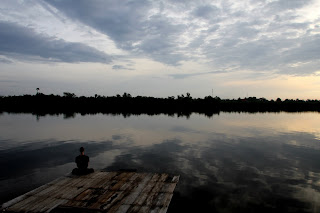 No town in Cambodia worth visiting is without an entry into the Seeing Hands Blind Massage dynasty and so it wasn’t long before we found ourselves in the capable (seeing) hands of the imaginatively titled Seeing Hands Blind Massage 5. The blind, although having lost 90% of their vision have clearly not lost their sense of irony, as evident by the clever branding of their 5 shop franchise. It was only during my visit to Seeing Hands Blind Massage 5 which made me question just how much the masseurs hands could see. Things started off relatively normal. A foot rub here, an ankle twist there. Without warning the nimble little fella mounted the table and proceeded to use his extremities in all manner of imaginative ways to stretch, click and pound my lower back into shape. Then it happened. During a massage, particularly for around the inner thigh area it’s not uncommon for the masseur to accidently brush past ones manhood whilst on their upward trajectory. Whilst it could be incredibly embarrassing I assume it’s just standard practice that the masseur then knows the area and to maybe stop short on their next approach. Wrong. The next couple of minutes whilst my enthusiastic masseur worked over my right inner-thigh went something like this.

After what felt like an hour he nipped off the table and on his journey around to the other side I took the opportunity to reach into my standard issue blue medical scrubs and tuck ‘Little Richard’ under in a sort of covert mangina.

The gentleman then asked me to lay on my back, something I don’t usually do for people I’ve only just met, and took residence at the end of the bed. He took one of my legs, I can’t remember which one, it’s irrelevant, and whilst kneeling placed my ankle snugly under his crotch resting almost perfectly on his genitals. The heterosexual man in me immediately flinched.

“You have problem sir?” He asked with his head facing the ceiling.

I took a deep breath and swallowed a little bit of pride, “No, no!” I politely replied.

I wasn’t sure if it was my knee or my masculinity.

Don’t get me wrong, I’m not going on record as saying I was molested by a young, blind, male masseur with my wife just inches away on the table next to me. In fact the massage was probably better than any I have had since being away in Cambodia. However if you do find yourself in one of the Seeing Hands Blind Massage parlours, and i recommend you do, be aware that personal space is something you will almost certainly have to surrender.

Whilst our time in Kampot was nice and I could have spent forever and a day trawling around the barren streets, saying hello to strangers and taking photographs of the derelict, French architecture there were a couple of things missing in the way of a beach and some sunshine. We had been avidly checking the weather reports and even considered skipping Vietnam in favour of Bali in search of some soleil but on one tranquil morning whilst the suns rays broke across the river outside Bodhi and the clouds slowly dispersed we grabbed to nearest tuk-tuk and pointed towards the small beachside town of Kep.

The highlight of our stay in Kep despite the fantastic weather and food has been the Jasmine Valley Eco Resort where we arrived some five days ago. We had no intention of staying longer than a night or two but I implore anyone to pay a visit here and not be seduced by the natural charm of this beautiful jungle retreat.

After a somewhat treacherous 10-minute tuk-tuk ride along a muddy road up into the mountainous jungles of Kep appears one of the most incredibly serene natural resorts I have ever seen. Now, I hate the term ‘holiday resort’. It reminds me of faceless hotels serving western food where other westerners all pay to congregate by a pool and take rubbish pictures of each other whilst slowly cooking themselves into a nice shade of lobster over the course of their 7-day sentence. Yes, call me a snob but I would rather visit a country and pay $5 a night to stay in a hostel with character than $400 for a week spent inside the confines of what is essentially a prison with a swimming pool. Plus the word ‘resort’ is only generally used when something goes wrong and you have to take the other, usually less attractive option. “Oh our plans didn’t work out so we had to ‘resort’ to this instead.” Not interested. Jasmine Valley however is like no other ‘resort’ I have ever seen. Less than a year old this jungle oasis is run by the incredibly likeable husband/wife duo of ex-Aussie filmmaker Owen Beck, his wife Jasmine and business partner/friend/fellow Brit Scott who I’m told met during a TEFL course in Phuket. A nicer bunch of people you will rarely meet and I can understand why the two ex-pats chose the easy-going lifestyle in Cambodia to setup their business venture – and what a venture it is. Endless meandering brick paths lead you through a mirage of colours and scents as your senses go wild with curiosity. Bushes rustle with activity as the local wildlife scarpers out of your path. Owen told of fruits which tasted like chocolate pudding and home-brewed passion fruit cider. He is like a real life eco-Willy Wonka. There is a natural pool that collects rainwater for the guests to bathe in. Butterfly bask in your footsteps like in a Disney movie. At night-time the surrounding jungle comes alive as frogs croak in unison and the faint sound of gibbons can be heard in the trees. If Bodhi Villa is the ‘Hotel California’ of Cambodia then Jasmine Valley is its ‘Pandora’.

Sara Damergi is a TV presenter, entrepreneur and globetrotter. TV clients include, MTV ,5IVE, Bravo, Sky and Channel 4. Sara also presented international extreme sports show, ''The Crunch'' filmed across China which was a prime-time success worldwide. Sara is of Lebanese and English descent and has always had a passion for new cultures and travel having lived in Beirut, Cyprus, London and in her clubbing heyday Ibiza, she is now indefinitely travelling the world funded from her internet businesses and blogging about it with her husband What Politz and Damage Did Next.
Read More Share
Cryo-Vacking (Sous Vide)
Boulder’s Open Studios & Art Scene